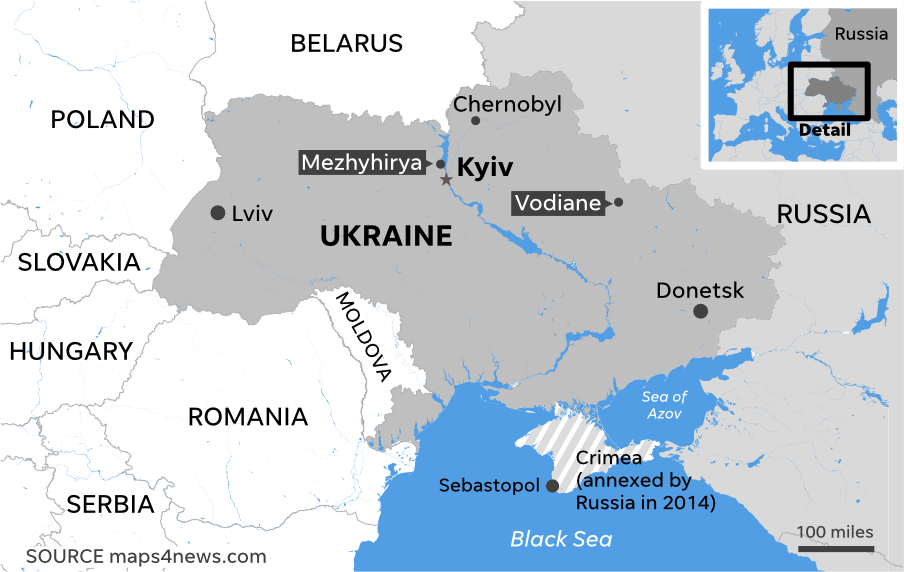 After amassing troops on the Ukrainian border, Russia on Monday sent them into rebel-held areas in eastern Ukraine. Several cities and places within the region are being commonly used in news coverage of the conflict.

There can be some confusion about their pronunciation, because Ukraine is a former Soviet republic, and places can carry different pronunciations. Even how the country is referred to can be problematic.

As a former Soviet republic – the Soviet Union was dissolved in 1991 – it was usually referred to as “the Ukraine” in the English language. “The Ukrainians today prefer to drop ‘the’ from ‘the Ukraine’ and simply refer to it as Ukraine,” said Anton Fedyashin, an associate professor of Russian and Eastern European history at American University.

Where is Ukraine? A guide to post-Soviet eastern Europe and where NATO members are

The use of “the Ukraine” implies a subordinate status to Russia. “The absence of that article (‘the’) implies an independent and sovereign Ukraine, in other words, a post-Soviet Ukraine,” Fedyashin said. Some English-language media outlets and commentators still use the older Soviet-era version “the Ukraine” in their coverage.

►Kyiv (pronounced KEE-ev). The capital of Ukraine, formerly known as Kiev (pronounced Key-EV). Kiev is “the Russianized version” of the city’s name, said Fedyashin. The Associated Press and other Western media changed how it referred to the city because Ukraine sought to promote domestic identity as opposed to its Russian and Soviet past. Hear how to pronounce “Kyiv.”

►Donetsk (Don-YET-sk). Donetsk is the name of the capital city of the Donetsk Region in eastern Ukraine. Since 2014, pro-Russian separatist forces have fought in the region to gain control. President Vladimir Putin recognized the independence of those separatist-held areas on Monday. Hear how to pronounce “Donetsk.”

►Luhansk (pronounced Lu-HAN-sk). The name of the region – and its capital city – located to the north of Donetsk. Like Donetsk, Luhansk is a breakaway region that Ukraine has been trying to regain from pro-Russian separatists. The Russian spelling is Lugansk and the pronunciation is “Loo-GAN-sk” with a hard G, Fedyashin said. Hear how to pronounce “Luhansk.”

►Donbas (Don-BAS). This word refers to the region of southeastern Ukraine that includes Donetsk and Luhansk. The term “Donbas” is an acronym, which means “Donets coal basin,” Fedyashin said. “So when you say ‘Donbas,’ everyone understands in Russia and Ukraine that you’re talking about the southeast part of Ukraine, where the coal mines are plentiful.” Hear how to pronounce “Donbas.”

►Oblast  (OH-blust), means “region,” an administrative unit. Donetsk and Luhansk are capitals of regions with the same name. Hear how to pronounce “oblast.”