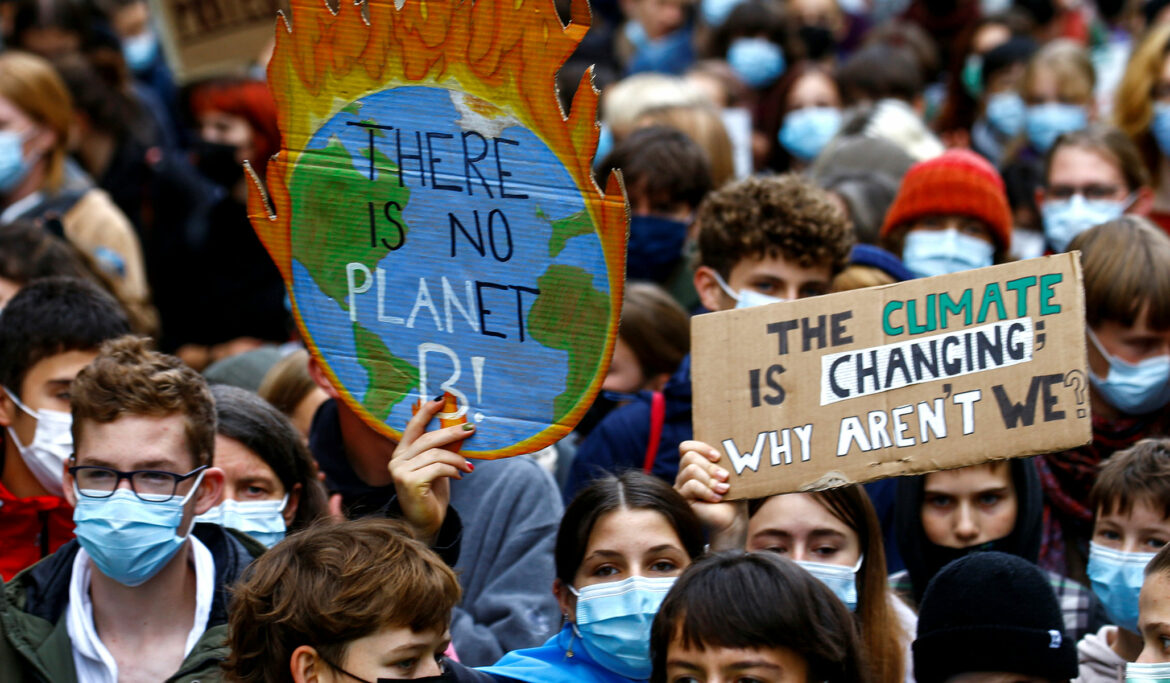 Protestors at the Global Climate Strike of the movement Fridays for Future at Kramgasse Street in Bern, Switzerland, October 22, 2021. (Arnd Wiegmann/Reuters)

Like all Halloween tales, they aren’t grounded in reality.

Starting tomorrow, on Halloween, government leaders from around the world will meet in Glasgow, Scotland, for the annual U.N. Climate Change Conference, which this year will feature some of its scariest stories yet.

The only problem is that when you take the mask off the harrowing claims that climate change poses an imminent existential threat to humanity, they don’t hold up.

The most dire climate-change predictions, which fuel the apocalyptic discourse that surrounds the issue, stem from a climate model known as RCP 8.5. According to RCP 8.5, by the year 2100, the Earth will warm 4.3 degrees Celsius, causing sea levels to surge and making many countries too hot to inhabit. But models are only as solid as the assumptions on which they rest, and RCP 8.5’s assumptions are wild, to put it mildly.

The model assumes that, despite coal’s declining market position and usage, and despite projections that it will continue to decline, worldwide per capita coal use will rise three- to six-fold over the next 50 years, coming to once again power our economies and heat our homes. It assumes that liquefied coal will even fuel our cars. It assumes that the rebirth of the coal industry will power so much growth that, by 2100, the poorest country on Earth today will have a higher GDP than today’s wealthiest countries currently do (while paradoxically also being too hot to inhabit). And it assumes that economic growth will be much less energy-efficient than it is today, which would represent the reversal of a decades-long trend.

It should go without saying that none of these are even remotely safe assumptions.

Similarly, many dire predictions about climate change’s effects on weather patterns are overwrought. It is true that the latest report from the U.N.’s Intergovernmental Panel on Climate Change notes that fire weather, heavy precipitation, ecological and agricultural droughts, and heat waves are increasing in frequency. But it is also true that while heat waves have become more frequent since 1960, the Dust Bowl era of the 1930s remains the peak period of extreme heat in the U.S. Similarly, while weather conducive to wildfires has become more frequent, the global land area burned by wildfires has steadily decreased since the early 1900s, and much of the recent damage has been due to poor forest-management practices.

What’s more, there’s plenty of good news that can’t be fit into a spooky climate-change story. The IPCC’s most recent report notes no discernible long-term increase in flooding, hydrological and meteorological droughts, hurricanes, tornadoes, winter storms, extreme winds, thunderstorms, lightning, or hail. And humanity is better protected than it once was from those natural disasters that do happen: A recent study published in the peer-reviewed journal Global Environmental Change found that economic losses caused by climate-related disasters dropped 80 percent from 1980 to 2016.

If you can ignore the overblown rhetoric, there are fundamental truths to be reckoned with: Climate change is real, and human activity does indeed contribute to it. But irresponsible fearmongering only makes the problem harder to address.

According to the best evidence, the world is on track to hit emissions and warming levels that, as of a couple of years ago, would have been considered a success. For instance, according to leading industry publications, energy-related-emissions projections are in line with the (much cooler) climate model RCP 4.5, which the 2018 U.S. National Climate Assessment heralded as a low-emissions policy-success scenario. It’s likely that global “peak per capita CO2 emissions” were reached several years ago. Major independent energy-research organizations such as the International Energy Agency predict that annual per capita CO2 emissions will decline in the decades to come, and it’s likely that global CO2 emissions from fossil fuels are on the brink of a long plateau. The best computer models predict that by 2100, the Earth will be 2.2 degrees Celsius warmer than it was in 1850. That will certainly cause environmental changes, but it doesn’t constitute an existential threat.

Nor are we humans without tools to ameliorate the problem. Adaptive engineering, carbon–offset and water markets, and the continued growth of more environmentally conscious ways of producing the goods and services needed for modern life can all lessen climate change and its effects.

So, as Halloween arrives amid the U.N. Climate Change Conference this year, leaders should ditch the Grim Reaper costumes and don more reasonable attire. With level heads and the right policies, they can both protect the environment and provide a better life for billions around the globe.