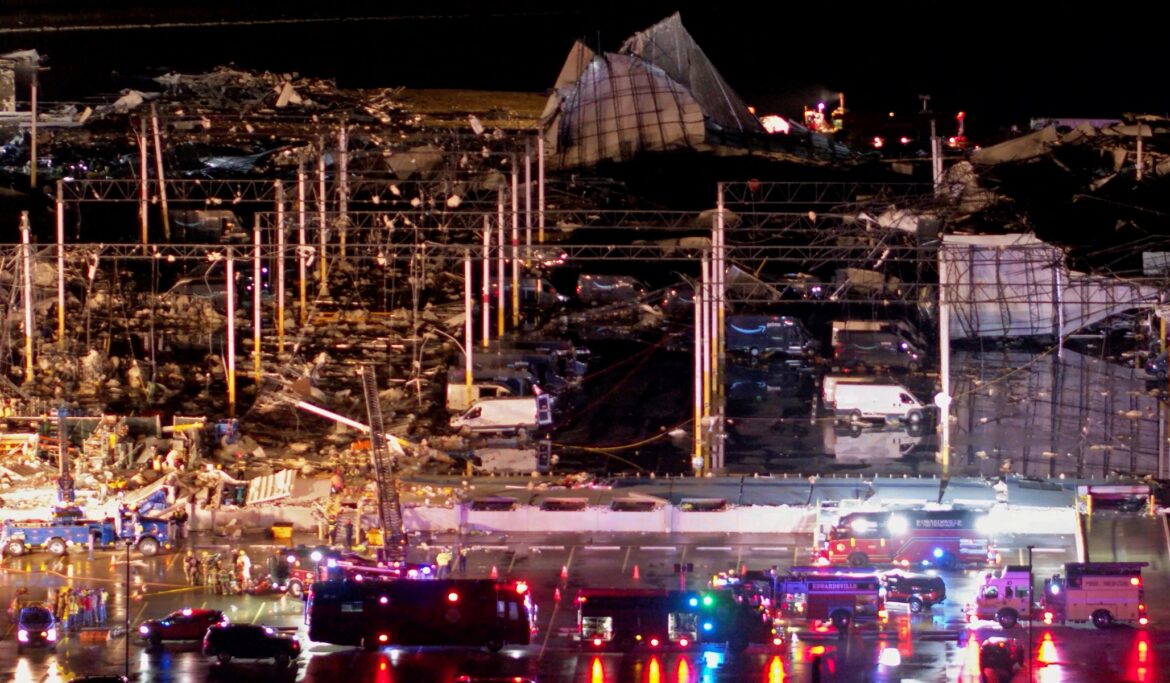 Update 12:15 p.m.: Kentucky governor Andy Beshear said at least 70 people were killed the as a result of tornadoes and storms over Friday night, in a press conference around mid-day on Saturday. The final death toll could top 100 people.

“This will be, I believe, the deadliest tornado system to ever run through Kentucky,” Beshear told reporters.

Dozens of people are feared dead after tornadoes and storms crisscrossed multiple states in the Midwest and southern U.S. on Friday.

The roof of a candle factory in Mayfield, Ky., collapsed with about 110 people still inside, Kentucky governor Andy Beshear (D.) said at a press conference early on Saturday morning.

Mayfield KY at the candle plant. FD finds another person in the rubble around 6:00 am. Search & recovery will likely take a few days. Debris from building collapse 15-20’high. Sending prayers to all the families that lost loved ones over multiple states. #kywx #arwx #tnwx #mowx pic.twitter.com/DcUiKdzA6f

The roof of an Amazon warehouse Edwardsville, Il., was ripped off and a wall collapsed during the storm, according to local police chief Mike Fillback. Police said there were “confirmed fatalities” at the warehouse, although the exact number was unclear.

Footage from KMOV, a CBS affiliate in St. Louis, showed damage to the Amazon factory in Edwardsville:

DEVELOPING: This is a view of the Amazon warehouse in Edwardsville, where you can see the scope of damage and also search and rescue response. We’ve learned around 100 people were trapped inside. @KMOV pic.twitter.com/ToxT1L8cch

“This morning, I was briefed on the devastating tornadoes across the central U.S. To lose a loved one in a storm like this is an unimaginable tragedy,” President Biden said in a statement posted on Twitter. “We’re working with Governors to ensure they have what they need as the search for survivors and damage assessments continue.”

The storms caused “the most severe tornado event in Kentucky’s history,” Beshear said. “The primary tornado was on the ground continuously for over 200 miles in our state, something we have never seen before.”

Beshear added, “we believe our death toll from this event will exceed 50 Kentuckians, probably end up closer to 70 to 100 lost lives.”

Kentucky emergency management director Michael Dossett said the storm system could be one of the worst in the state’s history.

“This will be one of the most significant, the most extensive disasters that Kentucky has faced,” Dossett said.

“I am praying for the lives lost and communities impacted by the tornado devastation throughout the Commonwealth,” McConnell said in a statement. “Thank you to the first responders and the National Guard for their brave efforts amid this tragedy.”