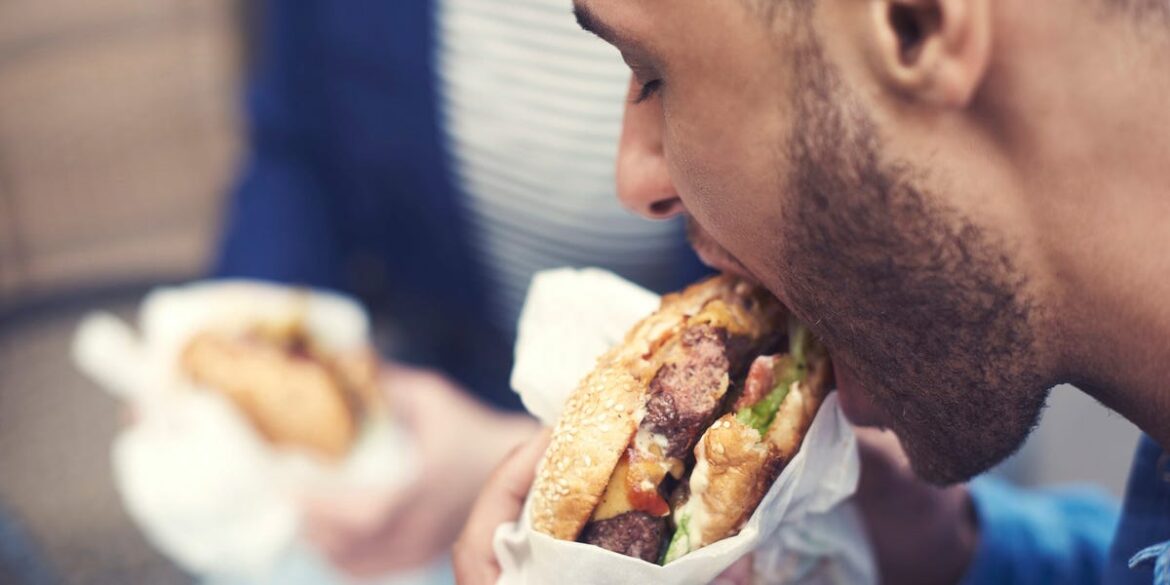 Eating more than five servings of meat weekly may be linked to higher cancer risk, research suggests.
Data showed men, specifically, had lower rates of certain cancers if they were vegetarian or pescetarian.
Factors like eating more plants and having a healthy weight may make a difference, one researcher says.

People who eat less meat or stick to vegetarian diets may have a lower risk of certain cancers, suggests a study published this week in BMC Medicine.

Researchers from the University of Oxford analyzed data from 472,377 adults in the UK, aged 40-70, who did not have cancer at the start of the study. During an average of 11 years of follow-up, the researchers compared the rates of cancer diagnoses to to data on how often they ate meat, including processed meat, beef, pork, lamb, and poultry. Fish was included as a separate category.

They found that vegetarians and vegans had a 14% lower overall cancer risk, compared to people who ate meat nearly every day (more than five times a week, on average). People who ate fish, but not meat, had a 10% lower risk, and those who ate meat less frequently had a 2% lower risk.

For certain types of cancer, the difference was even more significant and a surprise to researchers, Cody Watling, lead author of the study and a PhD student at Oxford, told Insider.

The biggest shift was the prostate cancer risk for vegetarian or pescetarian men, who had a 20-31% lower risk than their meat-eating counterparts. For women, a vegetarian or pescatarian diet had the biggest impact on reducing their risk of postmenopausal breast cancer.

Watling said one hypothesis to explain the gender disparity is that men are typically less health conscious, according to prior research, and may be taking a less healthy approach to their meat-centered dishes. “It could be that women, even if they do follow a regular meat eating diet, are eating more whole grains, men may be eating more processed meats,” he said.

While more research is needed to understand the link between diets and cancers, the results suggest that over time how we eat meat — including what we eat with it — may play an important role in health, Watling said.

The study is observational, which means the research is not a perfect assessment of how meat eating impacts cancer risk. Many factors could explain the link, including overall lifestyle, Watling said.

For instance, vegetarians and vegans tend to have a lower body mass index (BMI), or height to weight ratio, suggesting lower rates of obesity, a known risk factor for cancer. This partly explained the different in breast cancer rates in the study, Watling said.

However, rates of prostate cancer remained higher in the meat-eating group, even after accounting for BMI.

Vegetarians and pescatarians also tended to be younger, were more likely to be college-educated and physically active, and more often had never smoked tobacco. They also reported drinking less alcohol, which is a known cancer-causing substance,

The type of meat may also make a difference: some evidence suggests that while processed meat may increase health risks, unprocessed red meat or poultry may not.

Regardless of the type of meat you eat, however, getting a variety of plant foods in your diet has science-based benefits for lowering risks of cancer and other chronic diseases and improving overall health.

“There may potentially be a lower risk for individuals who exclude meat, but to follow a healthy diet, you don’t necessarily have to exclude meat,” Watling said. “Habits like eating whole grains, vegetables and legumes, and maintaining a healthy weight are things we should all be doing regardless of whether we’re vegetarians or meat-eaters.”