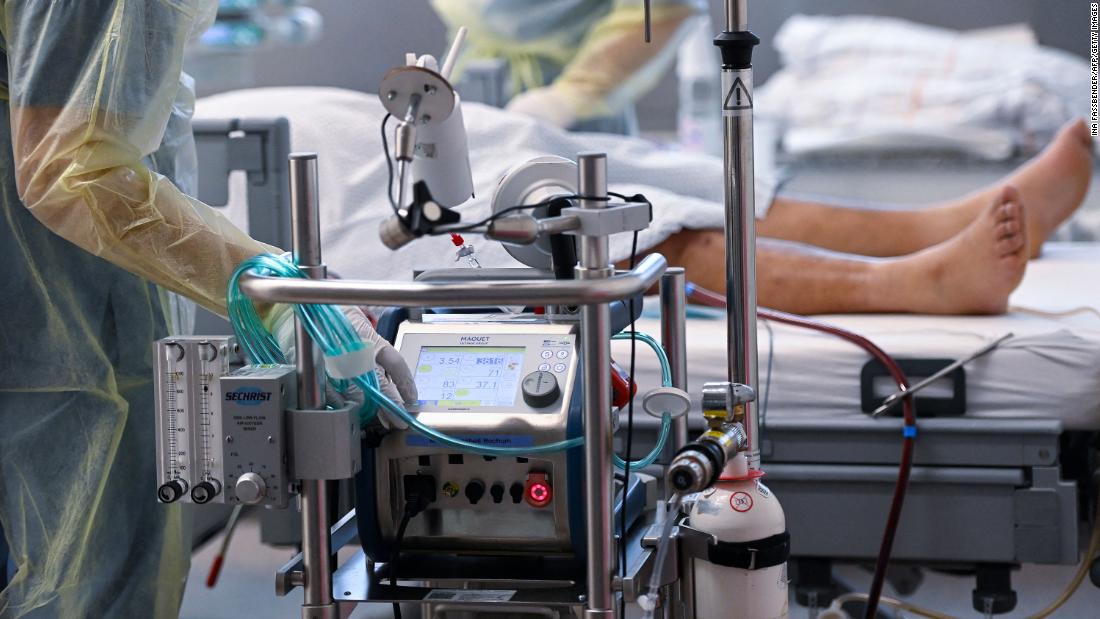 But at the height of the pandemic, many patients couldn’t get the treatment because there weren’t enough beds, machines or skilled staff to care for them, the study found.

Nearly 90% of patients who met Vanderbilt’s stringent criteria to receive ECMO, but couldn’t get in for care, died.

“I think this is very powerful to me, because, you know, for the first time, we were actually seeing what is happening to these patients, when they don’t receive this therapy,” said lead study researcher Whitney Gannon, director of quality and education for the adult ECMO program at Vanderbilt.

Gannon said when the Delta surge was at its worst in the South, she would get 10 to 15 calls a day for patients who needed ECMO. At maximum capacity, Vanderbilt had space for seven EMCO patients at a time, so many of these patients were turned away.

“These patients were young,” said Gannon. “They weren’t chronically ill. They were just young, healthy people who got Covid.”

Gannon said she would often call the next day to check on the patients they couldn’t admit, only to find out that they’d died.

Those phone calls motivated Gannon to do the study, which was published in the American Journal of Respiratory and Critical Care Medicine.

The difference between life and death

ECMO works by using tubes and pumps to circulate and oxygenate the blood outside the body. The therapy takes over for the heart and lungs, allowing them time to recover.

James Perkinson, a 28-year-old father of two, was one of the lucky ones. He was admitted to the hospital two days before Christmas with blood oxygen levels at 82%. His condition quickly deteriorated, and he was placed on a ventilator.

Within a few days, it was clear to his doctors the vent wasn’t going to be enough. His lungs were too damaged.

The hospital had a spot for him, and he started on ECMO. He was hooked up the machines for a month before they began to wean him off.

Speaking from his hospital bed this week, his voice still raspy from have a tube in his windpipe, he knows how close he came to dying. He said without ECMO, he wouldn’t have survived.

“If it wasn’t for that, I would not be here today. I would be gone long ago,” he said. “This is a lifesaver.”

Perkinson caught Covid-19 two days before he was scheduled to get his first dose of a vaccine.

Before the pandemic, it was difficult to study ECMO to find out exactly how effective the treatment might be. Patients who qualified for it were so sick that it was considered unethical for researchers to randomly assign a patient who was critically ill to go without it.

Despite these hurdles, a large group of international researchers attempted a randomized study of ECMO in 2018. They split 249 patients with acute respiratory distress syndrome — the same diagnosis many Covid-19 patients face — into two groups. The first group got ECMO, while the second was treated with mechanical ventilation.

So that no one was denied care, the researchers allowed patients who were first assigned to be on a ventilator to switch to ECMO if their treatment stopped working. About one-quarter of the group on ventilators did eventually move to ECMO, which may have muddied the results. Most who were switched — 20 out of 35 — died.

The study, which was published in The New England Journal of Medicine, found no difference in outcomes for people assigned to ventilators or ECMO, leaving doctors to wonder if their patients really were better off with the more aggressive and expensive therapy.

A grim circumstance measures the value of a treatment

At Vanderbilt, doctors realized they didn’t need to randomize patients to study ECMO. The pandemic was doing that for them. Patients who received the treatment got it because of blind luck.

Someone called for them on a day when the hospital just happened to have an open bed, which wasn’t often. Covid patients can remain on ECMO for a month or more.

“This was something we were experiencing in a very visceral way that I felt like the public doesn’t know,” said Dr. Jon Casey, a pulmonologist at Vanderbilt.

“We would be getting calls from other doctors. And you know, we were their tenth call looking for this,” Casey said. “And taking those calls was really hard.”

Casey said Vanderbilt’s experience wasn’t unusual. “I think this is the exact same experience every ECMO center in the nation,” he said.

For eight months, Gannon and her team collected information on every patient referred to Vanderbilt for ECMO.

Because the treatment was so limited, Vanderbilt was forced to ration it. They didn’t consider anyone over age 60, or those who had a body mass index over 55, or anyone who’d been on a ventilator for longer than seven days. Patients couldn’t have brain damage, chronic lung disease, cancer or failing organs. Having any of those strikes against you was an automatic no.

The center only considered patients over age 50 if they didn’t also have other two other risk factors: a body mass index over 45, kidney failure, more than four days on a ventilator, medications to support their blood pressure, had been in the hospital for longer than two weeks, or were four weeks out from their Covid diagnosis.

By the end of August 2021, 90 patients had been deemed medically eligible to receive the treatment. Vanderbilt took 35 of them. They had to turn away 55.

Among the group that received ECMO, 43% died in the hospital, while 89% of the patients who couldn’t be transferred, 49 out of 55, died.

“So among this very narrow group of people, these young people with few health problems who were really sick, it cut the risk of dying by about half,” Casey said.

ECMO doesn’t just require special machines. It also depends on having people who know how to run them. Each ECMO patient needs their own dedicated nurse, as well as a team of respiratory therapists and doctors to monitor the therapy. Gannon said that often, staffing as much as equipment was the reason they couldn’t admit more people.

Before the pandemic, Casey said Vanderbilt had a young ECMO program. They had the capacity to care for just two patients at time. But when the need was greatest, they more than tripled their capacity.

“So that was a pretty impressive expansion of resources in a moment of crisis, but it just wasn’t enough. There were periods where we were turning away two or three or four times as many patients as we could accept,” he said, a situation that caused moral trauma on the team because they knew each life depended on just a “yes” or “no” from them.

James Perkinson pulled through, but he has a long road ahead. He has to relearn how to eat, drink, walk, move his arms, “everything,” he said. But at least he has the chance to see his children again, and for that he is grateful.

“It’s a miracle,” he said, “And honestly, it hurts me because I took someone else’s second chance away, I feel.”