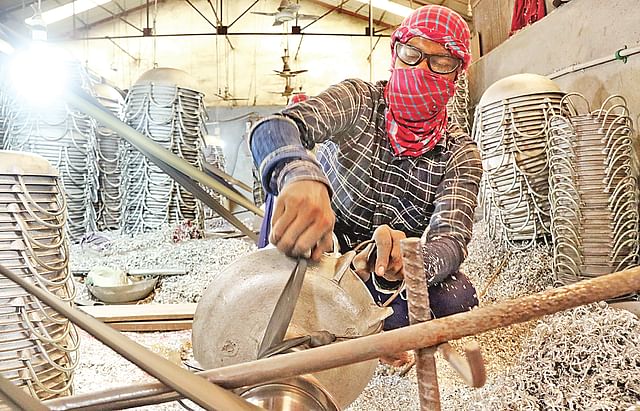 Bogra now has a wide reputation in agriculture and light engineering at home and abroad. This industry has changed the fortunes of many entrepreneurs in a very short time. Some have become millionaire businessmen from scratch. More than one lakh workers have been employed in their factories and workshops.

And at least five lakh families are directly and indirectly benefiting.

According to the entrepreneurs, the factories and workshops in Bogra, which have a financial value of one thousand crore rupees, meet about 80 percent of the annual demand of agricultural machinery in the country. As a result, the country’s import dependence for these equipments has decreased. Various equipments are also being exported abroad. They said that earlier agricultural machinery was imported from different countries including India, China, Japan, Korea and Vietnam. Now the traders here bring 80 percent of the total imported parts of the country.

The invention of agricultural implements and light engineering in Bogra was started by a handful of artisans doing repair work in the forge. They started this industry locally on a small scale by inventing and making small parts in the forties of last century. Some of the entrepreneurs said that the artisans behind the invention of agricultural machinery and light engineering equipment in Bogra used to repair the broken machinery by beating iron in the forge due to the scarcity of machinery. In this way, they invented agricultural and light equipment one by one while making parts by beating iron.

According to the organizers, at that time rice threshing machines made in Pakistan and Germany were used in the greater Bogra district. If those instruments broke down, they had to be taken to Yajneshwar Company in Calcutta for repairs. Or artisans were brought from Calcutta or Dhaka. These craftsmen used to come to the forges to make small parts for the broken machines. The blacksmiths also made parts with interest. In the sixties, the irrigation system came to the country. Although this machine was broken, it was brought to Bogra forge for repair.

In the seventies, the manufacture of small parts for irrigation started in the forge. During this time some artisans started inventing agricultural implements one after another. In the eighties, the invention of various types of light engineering equipment continued to grow rapidly.

At first a few artisans started inventing different equipments. After them, Md. Invented some agricultural machinery. Amir Hossain. He said that in the sixties, there was a blacksmith’s forge at Newmarket Pukurpara in the city, a small workshop of Afsar Mia at Railgate and another craftsman’s shop named Mojibar Rahman at Thanthania.

At one time lathes made in Germany and England came to the country. Only instruments were repaired in this lathe. Meanwhile, Dhalu artisans invented hand-made lathes. In 1966, he invented the first water centrifugal pump with a wooden structure. It is as if a revolution has taken place.

Entrepreneurs said, Dhalu artisan’s son from the nineties. Amir Hossain broke bricks and made bricks at the same time; He invented semai, chicken and fish feed, corn threshing, plastic pipes, cow feed and palm oil and jute peeling machines. At the same time, Azizar Rahman and a few other entrepreneurs started their journey with little capital. They are quite successful. Bogra’s agricultural and light engineering machinery business was revolutionized. In a short time they became millionaire businessmen.