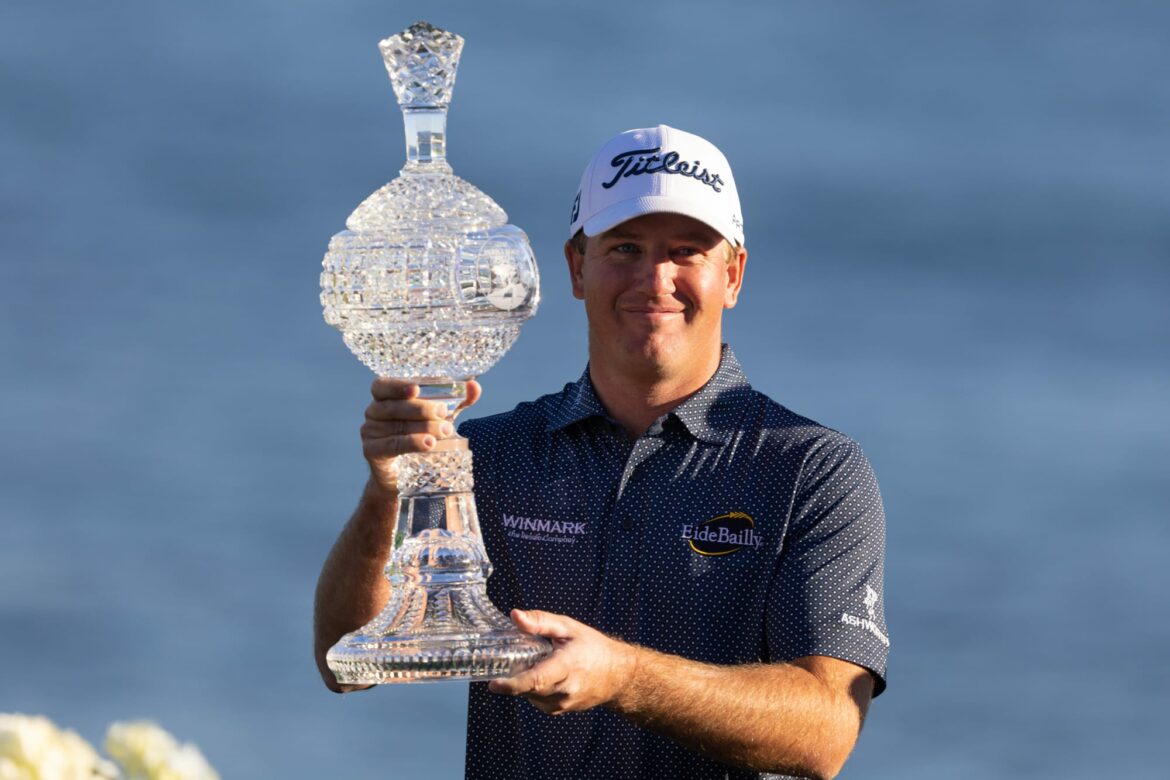 Tom Hoge, best known for being unknown, is now a PGA Tour champion after taking down Jordan Spieth at Pebble Beach on Sunday.

A 32-year-old journeyman, plodding along on the PGA Tour for the better part of a decade with only a few checks to show for it, finally getting his moment of glory not only against one of the best players of this generation but at iconic Pebble Beach? It’s the stuff dreams are made of.

That dream came true for Tom Hoge on Sunday. The North Dakota native won the AT&T Pebble Beach Pro-Am, blowing past Jordan Spieth by two shots for his first victory in 203 starts on the PGA Tour.

Before this week, Hoge’s claim to fame was his anonymity. In 2015, his rookie year on tour, he was tied for the lead heading to the weekend at the Wyndham Championship. His playing partner that day was someone a little more famous: Tiger Woods. Woods admitted at the time he didn’t know Hoge, didn’t even know who he was, had never even heard his name before.

The golf world knows who Hoge is now. Two shots back of Spieth and playing in the same group as World No. 4 Patrick Cantlay, Hoge hit his approach shot to the par-five 14th hole to 17 feet and made the putt for a birdie. At the 16th, where a year ago, with the pin in nearly the same location Spieth had holed out for an eagle, Hoge’s ball came up one roll short of falling in.

Hoge also birdied the par-3 17th, the location of many memorable moments on this idyllic backdrop along the Monterey Peninsula. He now led by two after Spieth bogeyed the same hole and finished at 19-under. He played the back nine in four-under to overtake Spieth. Who could’ve seen this coming?

Spieth could. Four years ago, Spieth told Doug Ferguson of the Associated Press about Hoge, saying, “When he gets in contention, he will not back down.” The statement was not about golf but about a game of craps they played at the John Deere Classic around 2015. But his words proved prescient.

Hoge didn’t have the same confidence. His experience playing in the final group with Woods, even with Spieth at this same event a year ago when Spieth’s caddie Michael Greller climbed a tree to help Hoge retrieve his ball, left him knowing he had to get into these moments more often.

“You really can’t practice for those moments. The energy, the excitement that you have in your body. For me the takeaway was that it’s hard to quiet my mind, quiet my hands, that sort of stuff,” Hoge said, the crystal glass trophy he’s chased for years sitting by his side.

“When you’re getting in that situation once or twice a year, it’s hard to play your best golf on those Sundays. I felt like for me to get a win and to be sitting here finally, I need to do it more often, get in the mix a little more often.”

He’s doing a better job of it so far in 2022. Two weeks ago, Hoge was runner-up to Hudson Swafford at the American Express. He was fourth at the RSM Classic in November. The man whose last win came at the North Dakota Open in 2017 had the experience he knew he needed.

Spieth knew all about Hoge coming into Sunday at one of golf’s meccas. Few others did. They won’t make the mistake of overlooking him again.