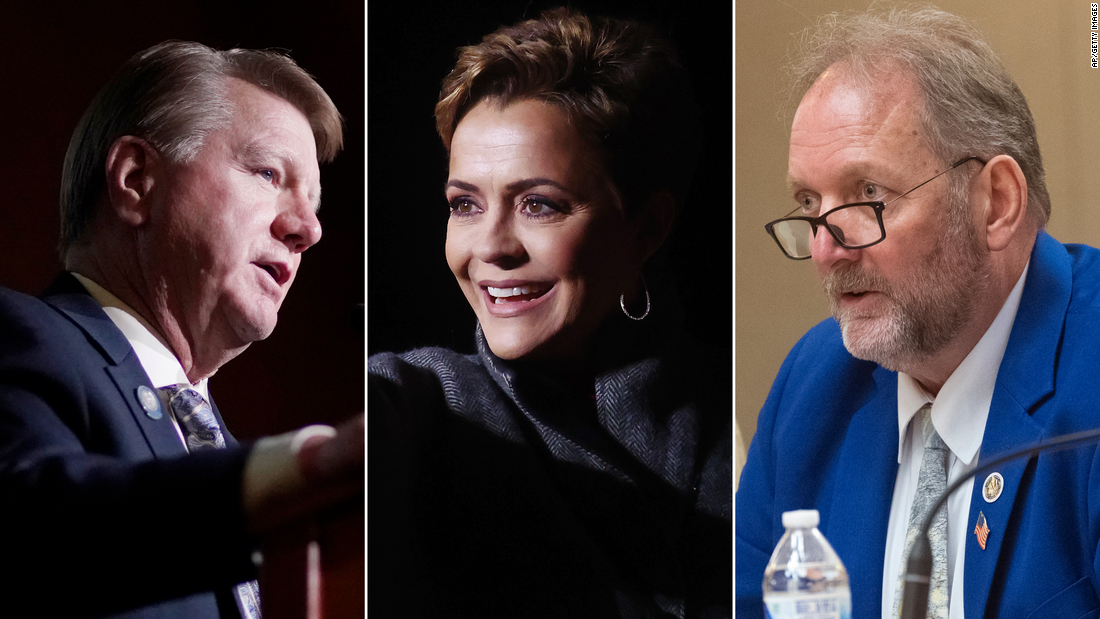 Some of these candidates are just plain lying that the 2020 election was stolen from former President Donald Trump or was rife with massive fraud. Others are professing to be merely asking questions. Still others are walking an evasive tightrope, trying to avoid angering Trump and his devotees while also not saying anything explicitly inaccurate.

All of that is dishonesty.

The same day earlier this month that Katie Arrington launched her Trump-endorsed campaign for a South Carolina congressional seat, she told The State newspaper, “I think Trump won the 2020 election.” Arrington cited “too many voting irregularities” — there is no evidence of any irregularities substantial enough to have changed the outcome in any state — and criticized “people like Nancy Mace,” the Republican incumbent she is challenging, for voting to certify President Joe Biden’s victory.

Arrington, who lost a 2018 race for this seat after ousting another Republican incumbent in the primary, even assigned partial blame to Mace and her fellow members of Congress for the January 6, 2021, riot at the US Capitol, which was perpetrated by a mob of Trump supporters.

Arrington told The State that the violence should never have occurred, before adding, “But then again, if, you know, people like Nancy Mace didn’t vote to certify the elections and they had sent them back to the states to be audited, we wouldn’t have had a January 6.” (The January 6 certification vote wasn’t held until after the Capitol was stormed, though Mace had made clear in the days prior that she would vote in favor of certifying Biden’s victory.)

State Rep. Timothy Ramthun, one of Wisconsin’s leading promoters of false election conspiracy theories, announced on February 12 — at an event attended by hundreds of people — that he is running for governor. Ramthun tried in January to get Wisconsin to withdraw the 10 Electoral College votes it delivered for Biden in 2020, though such a withdrawal is legally impossible. In addition, two other Wisconsin Republican gubernatorial candidates, former Lt. Gov. Rebecca Kleefisch and Marine veteran and businessman Kevin Nicholson, both refused to answer directly last week when asked in separate interviews on WTMJ radio whether they thought Trump had won Wisconsin in 2020, as The Associated Press reported, though Biden won the state by more than 20,000 votes. Nicholson called the 2020 election a smelly “mess,” while Kleefisch responded that she was waiting to see the results of ongoing Republican-led efforts to investigate the 2020 election in the state. Kleefisch had said categorically in a September 2021 interview that she thought Biden had won Wisconsin. A Kleefisch spokesperson claimed to the AP last week that the candidate’s position hadn’t changed; the spokesperson said Kleefisch knows Biden was the Wisconsin winner but can’t say whether he won the state “fairly.” Then, in a radio interview this week, Kleefisch said she thought the answer to the question of whether Biden the state won fairly is “going to wind up being no.”

The winner of the Republican primary will face incumbent Democratic Gov. Tony Evers.

Kari Lake, a Trump-endorsed candidate for Arizona governor, has been an aggressive promoter of lies about the 2020 election. Earlier this month, she joined Trump’s spokeswoman in promoting another dishonest claim — about Wisconsin. Lake tweeted on February 11, “Please share so we can wake people up: There are 4 million adults in Wisconsin, but 7.1 million voter registrations.” Her clear suggestion was that something nefarious was afoot.

There wasn’t. And her “7.1 million voter registrations” figure was highly misleading.

Wisconsin has a voting-age population of about 4.5 million people. It had about 3.5 million active registered voters as of the beginning of February, according to data published by the Wisconsin Elections Commission. You only get to 7.1 million voter registrations if you add in the state’s 3.6 million inactive registrations, as right-leaning website The Dispatch pointed out in its own fact check — except those inactive registrations, which include people who died, moved away or lost their right to vote because of a felony conviction, do not allow people to cast ballots. Lake was echoing a claim from a nonsense-laden presentation to Wisconsin state lawmakers from an amateur election analyst who quickly had some of his assertions and suggestions definitively debunked.

Hearst Newspapers journalists conducted a survey of the 143 Republicans running for Congress in Texas. The sobering results were published last week in the Houston Chronicle: Only 13 of these 143 candidates said the results of the 2020 election were legitimate.

“Of the 86 with discernible stances, at least 42 have said outright that the 2020 election was stolen, called the results illegitimate or said they would have voted not to certify,” the Chronicle reported. “Another 11 candidates have said there was enough fraud or irregularities to cast doubt on the results of the election.”

People running in “nearly every” competitive Texas race have “raised questions about the validity of the 2020 election or said outright that it was stolen,” the Chronicle reported — and of the five Republican congressional incumbents who voted to certify the election and are now seeking re-election, four are facing primary challengers who have denounced that certification vote.

At a Colorado debate earlier this month, eight Republicans seeking the party nomination to take on Democratic Sen. Michael Bennet were asked if they thought the 2020 election was stolen from Trump. Immediately after businessman Joe O’Dea offered the group’s only explicit no, state Rep. Ron Hanks, long a vocal promoter of false claims about the election, delivered an enthusiastic yes. “Here’s where I stand: Trump won this,” Hanks, whose comments were previously reported by Axios, said to loud cheers from a chunk of the audience. He went on to boast about how he had gone to Washington on January 6, 2021, visited the sham Arizona partisan election review its supporters have described as an “audit,” and even traveled to South Dakota for a “cyber symposium” hosted by Mike Lindell, the pillow businessman and wildly inaccurate election conspiracy theorist. In October, Hanks released a video ad depicting him firing a gun to blow up a device he labeled “Dominion Voting Machine.” Dominion machines have been the subject of false conspiracy theories from Lindell and other Trump allies; Dominion has filed a series of defamation lawsuits against people and right-wing television channels that have promoted the false claims.

Jim Marchant, a former Nevada state legislator who unsuccessfully tried to get a court to order a re-vote of his unsuccessful 2020 congressional race — though he lost by more than 16,000 votes — is now running for Nevada secretary of state, the job of top elections official, with rhetoric heavy on baseless election conspiracy theories.

At a debate earlier this month, Marchant vaguely and falsely argued that the conspiracies started well before 2020.

“Your vote hasn’t counted for decades,” he told Nevada residents in comments that were reported by The Nevada Independent. “You haven’t elected anybody. The people that are in office have been selected. You haven’t had a choice.”

Other candidates didn’t sound too different.

Candidate Socorro Keenan baselessly claimed the US was adopting “third-world country voting” of countries “where they know how to cheat,” casting aspersions on the legitimacy of both mail-in ballots and election “electronics.” (There is no indication of any significant fraud involving either mail-in ballots or anything electronic in 2020.) Candidate Richard Scotti, a former judge, made baseless claims about the Dominion machines that both Scotti and Marchant vowed to get rid of if elected.

Former Georgia Sen. David Perdue has put false claims and conspiracy theories about the 2020 election at the center of his Trump-endorsed candidacy for governor. Perdue is challenging Republican incumbent Gov. Brian Kemp, whom Trump and Trump allies have lambasted for refusing to go along with Trump’s attempts to overturn Biden’s victory in the state.

At the luncheon, Perdue blamed Kemp for what he claimed was the fact that “235,000 people showed up and voted in January that did not live in Georgia in November,” reported the Ledger-Enquirer of Columbus, Georgia. Perdue added, “And not one of those has been investigated.”

When CNN asked Perdue’s campaign for the source of his claim that there were 235,000 voters in the January runoffs who did not live in Georgia in November, spokesperson Jenni Sweat said Perdue had been “making reference to the 228,000 people who did not vote in November 2020 who voted in the January 2021 runoff,” according to an Atlanta Journal-Constitution article. But as the article made clear, that group of 228,000 does not only include people who had newly moved to the state — and there is no indication that this group did anything wrong.

There are various reasons why a Georgia voter could have voted in the January runoffs but not in the November general election. Some longtime Georgia residents simply turned 18 between Election Day in November 2020 and Election Day in January 2021, making them newly eligible to vote in the runoffs. And it’s easy to think of various other possibilities: A reliable Georgia voter could have planned to vote on November’s Election Day as usual, missed their chance because of a medical or work issue that day, and then resumed voting in the January runoffs; another resident could have been politically apathetic but persuaded to vote in the critical runoffs by a persistent friend or by one of the parties’ furious turnout drives.

And there is nothing improper about a new resident of the state voting in a runoff after arriving too late to register to vote in the general election.

This story has been updated to add additional comments from Rebecca Kleefisch about the 2020 election in Wisconsin.