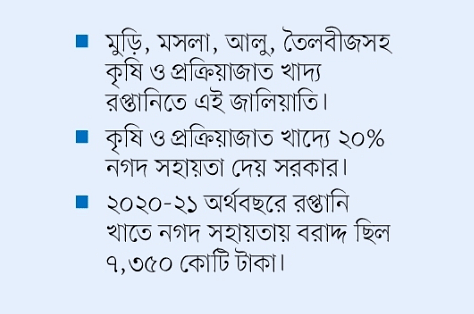 Mamun Enterprise, an exporter of agricultural and processed food products, has exported goods worth over Tk 53 crore through Chittagong port in the last five years. In return for these exports, they have also taken cash assistance of Tk 10 crore from the government. But now the customs investigation shows that no goods were actually exported. They have embezzled cash assistance from the government by showing fake exports.

The export documents of Mamun Enterprise give the address of the company’s office as Shatabdi Center on Inner Circular Road, Fakirapul, Dhaka. No organization named Mamun Enterprise was found in the building last Wednesday. Abdul Hai, who has been working as a security guard at Shatabdi Center for 15 years, told Prothom Alo that there has never been an organization by this name.

The name of the owner of Mamun Enterprise has been mentioned in the list of members of the Exporters Association. Elias Mamun Miyaji. He also has a mobile phone number in the list. However, it is found closed.

After this ‘fraud’ of Mamun Enterprise was caught, Chittagong Customs is looking into whether there have been any more such ‘fake’ exports. The investigation has so far revealed that in the last five years alone, there have been 800 fake shipments in the agricultural and processed food products sector. There are 16 exporters involved in this scam. Customs officials say they have begun investigating the shipments of a large number of suspicious export products from 41 other companies. At the end of the investigation, it will be known how much money was actually embezzled as opposed to how much money was actually exported.

This fraud is taking place in agricultural and processed agricultural products including turnips, spices, potatoes, oilseeds. Most of the shipments identified as counterfeit were destined for the United Arab Emirates and Malaysia. Analyzing hundreds of invoices, it is seen that each one has an average of 50,000 dollars worth of goods (Rs. 53 lakhs). At the rate of 20 percent, the cash assistance is 6 lakh rupees. The amount of cash assistance against 600 invoices is 6 crore rupees.

Chittagong Customs Commissioner Mohammad Fakhrul Alam told Prothom Alo that the irregularities found in the export of agricultural products or food products were mainly done to get subsidy money. Legal action will be taken in this regard at the end of the investigation.

The government provides assistance to various sectors to increase the country’s export earnings and increase exports of new products. Of these, agricultural and processed food products receive the highest assistance at 20 percent. In other words, if the government can bring export income for every 100 rupees, it gives a subsidy of 20 rupees. The government had allocated Tk 8,350 crore in the budget for the fiscal year 2020-21 for this export assistance. Some people are coming out with the image of fraud to get this cash assistance. According to the rules, in case of export of agricultural and processed food products, duty has to be levied at the designated depot. Then it is taken to the ship.

When contacted by Prothom Alo at several depots, the officials confirmed that the relevant consignment did not reach them. Nurul Qayyum Khan, president of Bangladesh Container Depot Association, an association of private depot owners, was asked about all the issues. He told Prothom Alo that the customs authorities had sent a letter asking for hundreds of consignments to know if they had been exported. We have seen that 98 per cent of these shipments did not reach the export depot.