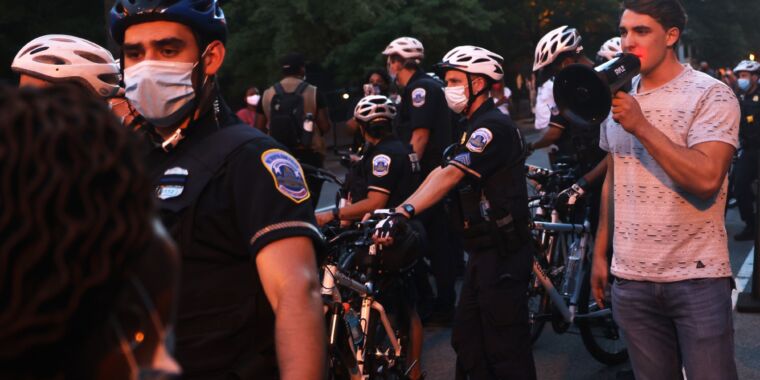 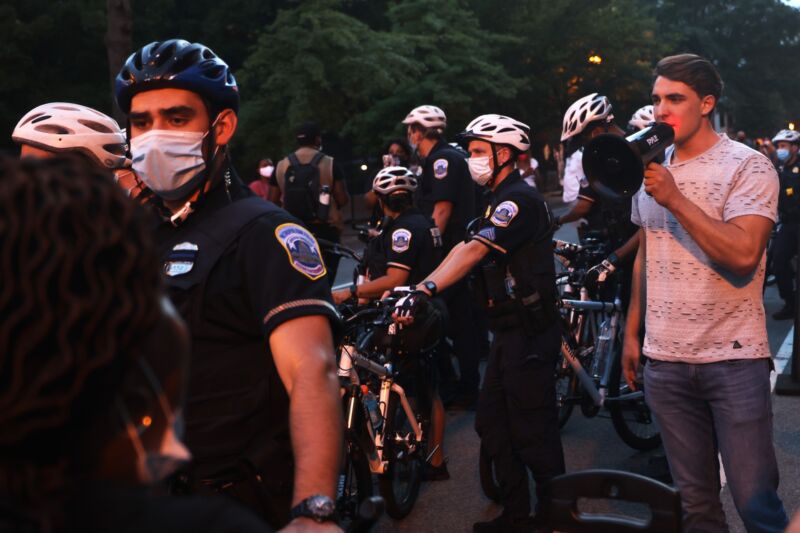 The Federal Communications Commission yesterday proposed a $5.1 million fine against two right-wing political operatives accused of making over 1,100 illegal robocalls. The calls were an attempt to convince people not to vote.

The recorded messages sent before the November 2020 election “told potential voters that if they voted by mail, their ‘personal information will be part of a public database that will be used by police departments to track down old warrants and be used by credit card companies to collect outstanding debts,'” the FCC said. Those messages were apparently targeted at Black voters and told them, “don’t be finessed into giving your private information to the man.”

John Burkman and Jacob Wohl were already facing felony charges in Wayne County Circuit Court for “orchestrating a robocall to suppress the vote in Detroit and other cities with significant minority populations,” as Michigan Attorney General Dana Nessel announced in November 2020. They were also indicted in Ohio, and New York Attorney General Letitia James is seeking fines that would add up to $2.75 million.

The felony election-law charges in Michigan carry combined maximum sentences of 24 years while the proposed FCC fine of $5.1 million would be the largest ever under the US Telephone Consumer Protection Act (TCPA). The FCC said this is “the first action where the FCC was not required to warn robocallers before robocall violations could be counted toward a proposed fine, per Congress’s recent amendment of the TCPA.”

Wohl and Burkman are widely known for being conspiracy theorists and supporters of former President Donald Trump.

“Wohl and Burkman have been involved in a number of deceptive practices to debase those they view as adversaries to conservatives,” Politico noted in an October 2020 article about the robocall charges in Michigan. “They fabricated sexual assault allegations against former Democratic candidate Pete Buttigieg, White House coronavirus task force member Anthony Fauci, and former special counsel Robert Mueller.” Amid their smear campaign against Buttigieg in 2019, Wohl apparently “staged a fake protest against himself, only to have it become immediately apparent that he was behind it,” The Daily Beast wrote at the time. Advertisement

The FCC issued a Notice of Apparent Liability accusing Burkman, Wohl, and J.M. Burkman & Associates of “apparently making 1,141 unlawful robocalls to wireless numbers without subscribers’ prior express consent, absent an emergency purpose, in violation of the Telephone Consumer Protection Act.” The calls were made between August 26 and September 14, 2020.

The FCC noted that the content of the messages wasn’t relevant to its determination that the calls were illegal, but the agency provided a transcript of the recording sent to voters:

Hi, this is Tamika Taylor from Project 1599, the civil rights organization founded by Jack Burkman and Jacob Wohl. Mail-in voting sounds great, but did you know that if you vote by mail, your personal information will be part of a public database that will be used by police departments to track down old warrants and be used by credit card companies to collect outstanding debts? The CDC is even pushing to use records for mail-in voting to track people for mandatory vaccines. Don’t be finessed into giving your private information to the man, stay safe and beware of vote by mail.

The FCC explained that “‘Project 1599’ is not a legal entity, but rather a branding name used to describe the activities of Burkman, Wohl, and Burkman & Associates.”

In October, a federal judge in New York ordered Burkman and Wohl to call voters back and inform them that the first message was false and violated US voting-rights laws. The judge’s order said the defendants’ actions were similar to those of the Ku Klux Klan except that instead of “guns, torches, burning crosses, and other dire methods perpetrated under the cover of white hoods,” they “carry out electoral terror using telephones, computers, and modern technology adapted to serve the same deleterious ends.”

“Send it to black neighborhoods”

In May, the New York AG’s office said its “investigation revealed that Wohl and Burkman clearly and deliberately targeted Black communities in carrying out their widespread robocall campaign. On August 25, 2020, the day before the robocalls were placed, Wohl emailed Burkman the audio file for the call and stated, ‘[w]e should send it to black neighborhoods…’ The next day, after the calls were sent and received by thousands of voters, Burkman emailed to congratulate Wohl, stating that ‘i love these robo calls…getting angry black call backs… win or lose… the black robo was a great [Jacob Wohl] idea.'”

The FCC said it received complaints in which “consumers expressed outrage at receiving the unsolicited robocalls.” The FCC investigation hit a slight roadblock because “many of the mobile phone customers declined to speak with [Enforcement] Bureau staff,” but “the two consumers who were willing to provide information stated that they had not given consent to the calls, and had not heard of Burkman, Wohl, or Burkman & Associates prior to receiving the robocalls. None of the consumers that the Bureau contacted stated that they consented to the calls,” the FCC said. Advertisement

FCC is bad at collecting fines

The FCC has a poor record of collecting robocall fines, so it is far from certain that Wohl and Burkman will pay $5.1 million or anything close to that. Wohl and Burkman have 30 days to pay the proposed fine or file an appeal seeking a reduction or cancellation of the penalty.

Cases can end in a settlement or with the FCC issuing a forfeiture order, which the commission would refer to the Justice Department if it isn’t paid. Acting FCC Chairwoman Jessica Rosenworcel issued a statement about the proposed fine in which she cited “the unanimous support of my colleagues,” suggesting that the commission’s 2-2 deadlock between Democrats and Republicans won’t be a roadblock in this instance.

As for the criminal charges, “Burkman and Wohl are awaiting trial in Wayne County Circuit Court after a failed dismissal attempt” and their next court date is on September 21, Nessel’s office said yesterday.

“This massive fine properly reflects the seriousness of the allegations these two political operatives face,” Nessel said. “Mr. Burkman and Mr. Wohl allegedly orchestrated a series of robocalls aimed at suppressing the vote in the November general election. While my office will continue to pursue the criminal case against these men, I applaud the FCC for its action today.”