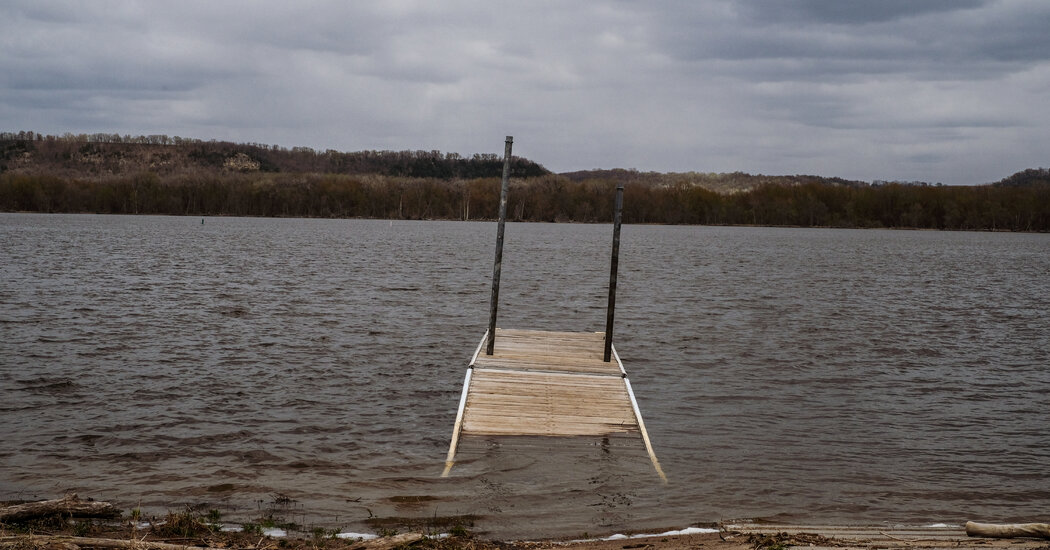 For decades, chronic flooding and nuclear waste have encroached on the ancestral lands in southeastern Minnesota that the Prairie Island Indian Community calls home, whittling them to about a third of their original size.

Two years after the tribe received federal recognition in 1936, the Army Corps of Engineers installed a lock-and-dam system just to the south along the Mississippi River. It repeatedly flooded the tribe’s land, including burial mounds, leaving members with only 300 livable acres.

Decades later, a stockpile of nuclear waste from a power plant next to the reservation, which the federal government reneged on a promise to remove in the 1990s, has tripled in size. It comes within 600 yards of some residents’ homes.

With no room to develop more housing on the reservation, more than 150 tribal members who are eager to live in their ancestral home are on a waiting list.

Cody Whitebear, 33, who serves as the tribe’s federal government relations specialist, is among those waiting. He hopes he can inherit his grandmother’s house, which is on the road closest to the power plant.

“I never had the opportunity to live on the reservation, be part of the community,” said Mr. Whitebear, who began connecting with his heritage after the birth of his son, Cayden. “In my mid-20s I had the desire to learn about my people and who I am and who we are.”

With no remedy in sight, the tribal community is asking Congress to put into trust about 1,200 acres of nearby land that it purchased near Pine Island, Minn., about 35 miles away, in 2018. That would allow the tribe to preserve its future by adding land farther away from the power plant to its reservation. In return, the tribe says it would give up the right to sue the government over flooding caused by the dam.

“Putting this land into trust for our tribe is crucial to righting the historical and current wrongs committed against our people,” said Shelley Buck, president of the Prairie Island Tribal Council. “The federal government put our tribe in this dangerous and untenable position, and it is the government’s responsibility to address the harm it has caused. The trust land would provide a safer alternative location for our members to live and work. The importance of that can’t be understated.”

Interviews and documents obtained by The New York Times show how the state of Minnesota and the federal government ignored warnings about potential dangers posed to the tribe as they kept allowing the amount of waste stored on the reservation to expand and did little to address annual flooding that harms the tribe’s economy.

“I mean, this is a classic environmental justice fact pattern,” said Heather Sibbison, chair of Dentons Native American law and policy practice at Dentons Law Firm. “We have a minority community, a disadvantaged community, bearing the brunt of two huge infrastructure projects that serve other people.”

The tribal community is home to descendants of the Mdewakanton Band of Eastern Dakota, who lived in the southern half of Minnesota. Unkept promises by white settlers led to the Dakota War of 1862. That year, the U.S. government hanged 38 Dakota men in Mankato, Minn., invalidated a land treaty and banished the Dakota from the region.

In 1934, the federal government recognized Prairie Island Indian Community as a reservation after members of the Mdewakanton Band spent decades returning to the region and buying parcels of land.

Today, much of the land that the government gave the tribe is underwater. But the tribe’s greatest fear is a nuclear plant disaster or toxic train derailment that would require evacuation, said Jon Priem, who oversees the small law enforcement and emergency service agencies on the island where the reservation sits. There is only one road in and out.

“We would be no match for anything of that magnitude,” Mr. Priem said. “Trying to get aid in here would be nearly impossible.”

As part of a temporary agreement that has become more permanent, waste from the power plant is stored within the borders of the Prairie Island Indian Community.

The waste is stored in pools before being transferred into massive steel canisters. Each one is eight and a half feet wide and weighs 122 tons when fully loaded. Forty-seven canisters are being stored on the island while the community waits for the federal government to transport them away.

A judge in the 1990s opposed putting nuclear waste on Prairie Island because of the government’s history of failing to find a permanent storage facility and record of broken promises to tribal communities. The state and the federal government allowed it anyway.

Documents show that in 1992, Judge Allan Klein recommended that the Minnesota Public Utilities Commission deny an application brought by Northern States Power Company, which later became Xcel Energy, to allow the waste to be stored on lands belonging to the Prairie Island Indian Community.

“Once the casks are in place, the path of least resistance is to leave them there indefinitely,” the judge stated in the documents.

Despite the judge’s caution, the Minnesota Public Utility Commission ruled that the power company could store the waste on the reservation. It capped the number of storage casks at 17, but in 2003 the cap was lifted.

Chris Clark, who oversees Xcel Energy’s Minnesota operations, said the nuclear waste was “an issue that we and the Prairie Island Indian Community have worked on together, obviously pushing the federal government to live up to their responsibilities to take that fuel and move it off the island.”

The Nuclear Waste Policy Act of 1982 assigned the responsibility of providing a permanent repository for spent nuclear fuel to the federal government. The government came to focus on a possible storage site at Yucca Mountain, in Nevada, but the plan is on hold.

Speaking of the residents who live 600 yards from the canisters, Mr. Clark said, “We know they’ve described themselves as the community who’s living closest to used fuel in the nation,” adding, “I have no basis to disagree with that and certainly, it is close.”

Xcel Energy pays the tribe for the land it uses, and together they lobby the federal government to fulfill its responsibility.

In 2003, as a condition of expanding the waste storage limits at Xcel Energy’s Prairie Island nuclear power plant, the State of Minnesota and Xcel Energy signed an agreement with the tribe to address some of its concerns.

It provided annual payments to the tribe of $2.25 million a year to, in part, help the tribe purchase up to 1,500 acres of new land within a 50-mile radius of the reservation to be taken into trust. The payments fell to $1.45 million in 2012, as the plant neared its original end-of-license dates, but rose again, to $2.5 million, when Xcel Energy’s operating licenses were extended and storage limits were increased.

The tribe used the money to purchase the second parcel of land for $15.5 million.

When Lu Taylor steps outside her home, the first things she sees are tall power lines and high-voltage electrical towers. Behind the towers is the nuclear power plant, which Ms. Taylor, 62, said has been the tribe’s top concern for generations. She grew up next to the plant; so did her children, and she believes her grandchildren will as well.

Members of Congress in 2019 introduced the Prairie Island Indian Community Land Claim Settlement Act, which would put into trust the nearby land that the tribe purchased, but the legislation has not moved.

A spokesman for the Department of the Interior said the agency is committed to working toward environmental justice in Indian Country and ensuring that tribal communities have the land they need to provide a safe home for their citizens.

In the meantime, though, Ms. Taylor, the tribe’s vice president, said the flooding and the stockpile of nuclear waste raised the risk of an accident taking everything away from them.

“It is a danger zone that can keep families away from their homes and keep us from our way of life,” she said. “It’s unthinkable.”