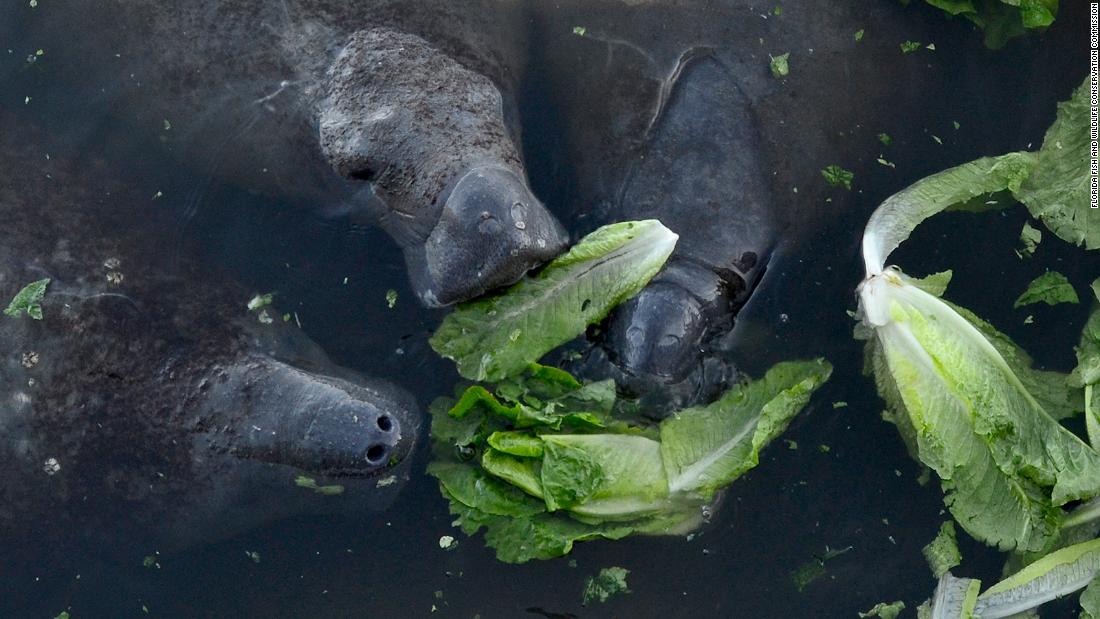 An average of 350 manatees a day are now coming to eat the greens being distributed at a temporary field response station in Cape Canaveral, along Florida’s east coast, officials from the Florida Fish and Wildlife Conservation Commission (FWC) said Wednesday.

State wildlife officials, along with the US Fish and Wildlife Service and in coordination with Florida Power & Light, set up the temporary feeding ground at the utility’s Cape Canaveral Clean Energy Center in Brevard County.

“The energy center is located in the northern Indian River Lagoon and is a critical stop-off point where manatees congregate as they migrate south during the winter,” Florida Power & Light wrote in a December news release.

On Wednesday, during a weekly video conference, officials said they have increased the amount of food they are distributing to roughly 20,000 pounds of vegetation a week, primarily romaine and butter leaf lettuce.

Both are known forages used in rehabilitation centers, according to Ron Mezich of the FWC. The produce has nutrients and digestible carbohydrates that the animals need, he added.

“At this point in time, we have been successful. Manatees are eating the romaine,” said Mezich. “We are exposing large amount of animals to this food source and we are making a difference.”

The number of animals per day has ranged from 25 to as many as 800, according to Mezich, and depends on the cold weather.

While officials have seen some success, commission spokesperson Tom Reinert said they have seen an uptick on moralities, likely a combination of the stress the animals are already under due to the lack of food resources and the cold temperatures.

This year there have been 261 manatee deaths in the state, according to FWC data updated February 11. Many of those deaths are pending necropsy for an official cause of death. There are currently more than 7,500 Florida manatees, according to FWC. Reinert said it will take years before any kind of impact to the manatee population as a whole will be known from this unusual mortality event. The feeding program is anticipated to continue through March, according to Mezich. The program has been funded greatly by donations from the public to the Florida Fish and Wildlife Foundation, which has paid for the produce shipments, according to Reinert.