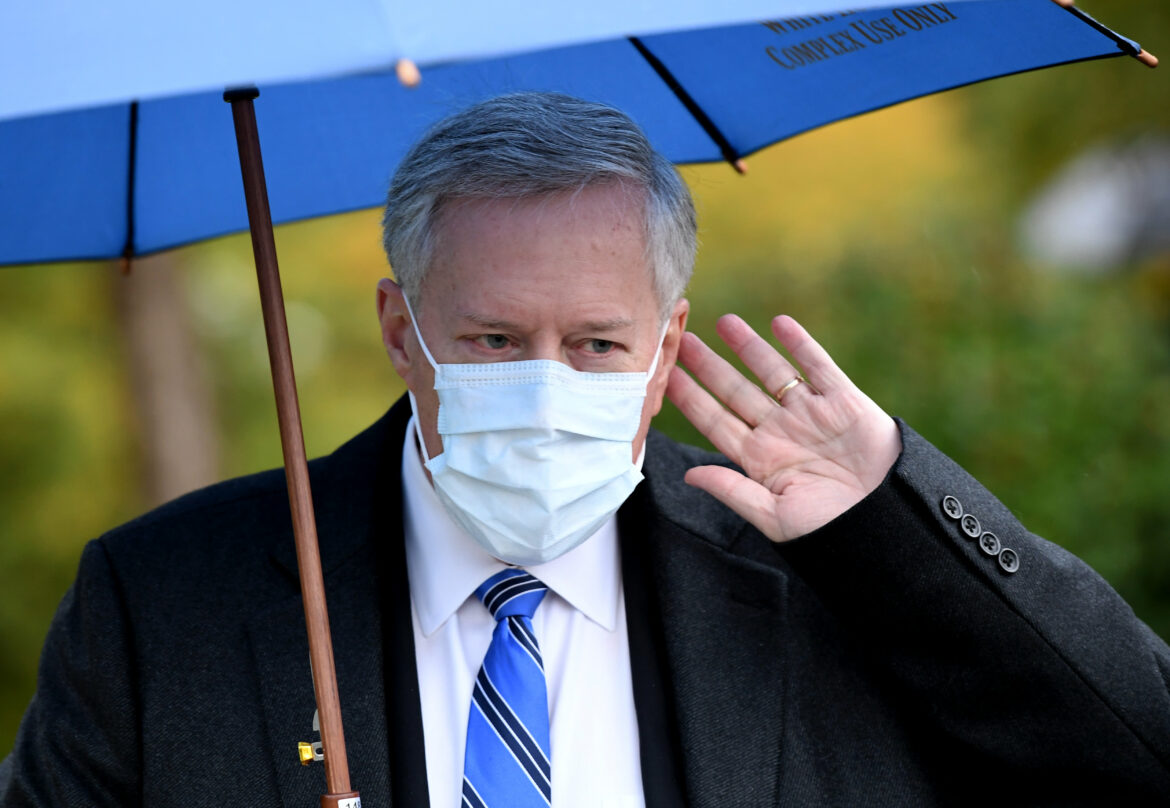 White House Chief of Staff Mark Meadows gestures as he walks back to the West Wing following an interview with FOX News outside the White House on October 25, 2020 in Washington, DC.

A stunning series of text messages to then-White House chief of staff Mark Meadows reveal that Donald Trump Jr., a trio of Fox News hosts and Republican members of Congress pleaded with him to get President Donald Trump to urge rioters at the Capitol on Jan. 6 to leave the complex.

The text messages, disclosed during the House’s ongoing contempt proceedings against Meadows, reveal a disconnect between how the writers of the messages privately feared the violence by Trump’s supporters, and how they later publicly minimized or rationalized the riot.

Fox News and a number of its hosts are among the most loyal media supporters of the Republican Trump, who before the riot had urged supporters to fight against the confirmation of the Democrat Joe Biden’s presidential election victory by a joint session of Congress.

Trump for hours resisted calls to publicly ask the thousands of his backers who invaded the Capitol complex to retreat, even as some of them battled with police, entered the Senate chamber and actively hunted for members of Congress.

“Mark, the president needs to tell the people in the Capitol to go home. This is hurting all of us. He is destroying his legacy,” Fox News host Laura Ingraham texted on Jan. 6, according to Rep. Liz Cheney of Wyoming, a Republican member of the House select committee investigating the insurrection.

Ingraham later on television that night suggested that the rioters were not supporters of the then-president, claiming, “I have never seen Trump rally attendees wearing helmets, black helmets, brown helmets, black backpacks — the uniforms you saw in some of these crowd shots.”

Among the rioters were members of right-wing, pro-Trump militia groups including Proud Boys and Oath Keepers. Some members of the mob carried weapons.

Another Fox personality, Brian Kilmeade of “Fox & Friends,” himself texted Meadows in language that echoed Ingraham’s fear of the effect of the violence on Trump’s purported legacy.

“Please get him on TV. Destroying everything you have accomplished,” Kilmeade texted, according to Cheney.

And Fox host Sean Hannity, a leading Trump booster, asked Meadows that day, “Can he [Trump] make a statement asking people to leave the Capitol,” according to Cheney on Monday night as she revealed evidence Meadows had given the committee before he abruptly stopped cooperating.

Like his colleagues, Hannity never told his viewers that he had asked Trump’s chief of staff get the president to say something that might stop the riot, even when he had Meadows on his show Monday evening, after the texts were publicly revealed.

Instead, Hannity after the attack on the Capitol downplayed the actions of the rioters, saying on TV that “the majority of them were peaceful.”

A Fox News spokeswoman did not immediately respond to a request for comment from CNBC.

Among the bluntest messages to Meadows beseeching him to get the president to act on Jan. 6 were ones from Trump’s eldest son, and Republican members of Congress, where Meadows had served seven years as a GOP House member from North Carolina.

“We need an Oval Office address,” Trump Jr. texted Meadows, Cheney said, noting that the younger Trump had texted the chief of staff “again and again.”

“He’s got to condemn this shit ASAP. The Capitol Police tweet is not enough,” Trump Jr. wrote in another message.

Trump Jr. has not responded to requests for comment by NBC News.

One Republican member of Congress wrote Meadows that day: “It is really bad up here on the hill.”

Another text to him from a Republican said, “The president needs to stop this ASAP,” Cheney revealed Tuesday.

A third text from a GOP member said, “Fix this now.”

With very few exceptions, Republican members of Congress have opposed the formation of the select committee investigating the Jan. 6 insurrection. In addition, 147 Republicans voted against certifying the election of Joe Biden on that day.

Hours after the riot began, Trump eventually asked his supporters to leave the Capitol, but even as he did so he justified their actions as warranted by their and his false claim to have lost the election to Biden as the result of ballot fraud.

In a subsequent tweet, he wrote: “These are the things and events that happen when a sacred landslide election victory is so unceremoniously & viciously stripped away from great patriots who have been badly & unfairly treated for so long,” he wrote. “Go home with love & in peace. Remember this day forever!”