With an undefeated 16-0 record, the 25 year old Chris “PrimeTime” Colbert was in position to move on to big things. In fact, he was supposed to fight for the WBA lightweight title at the Cosmopolitan in Las Vegas Saturday night, but his opponent, Roger Gutierrez , came down with Covid. Therefore, the widely unknown – but undefeated – Dominican Republic native Hector Luis Garcia, 14-0, stepped in and grasped the opportunity of a lifetime. The fight between he and Colbert was a scheduled 12 round title eliminator. 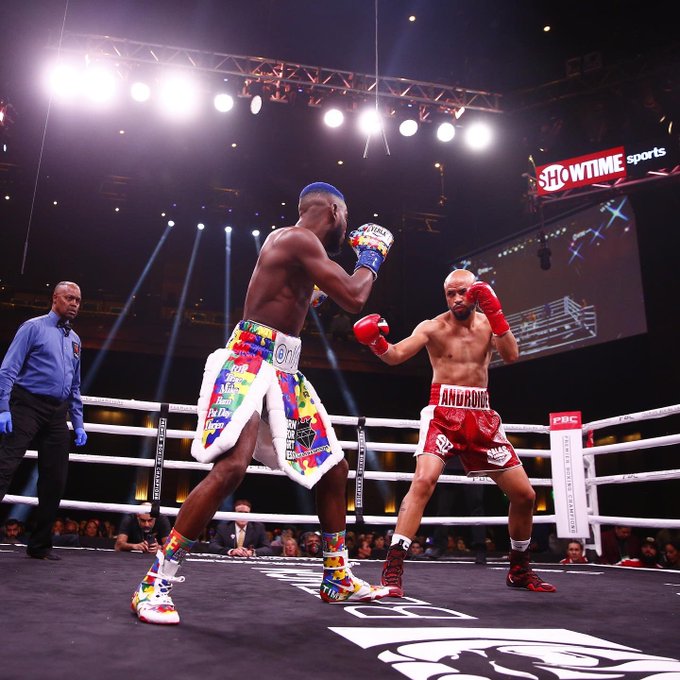 Colbert showed lightning fast speed in the first. Garcia fought aggressively in the second, making it clear that – though he was a replacement opponent – he was to be no pushover. Both men traded blows in the third. It was a closer battle than some may have expected beforehand. Garcia employed a hit and hold strategy in the fourth. The underdog also applied effective pressure. By the fifth, it was obvious Garcia’s aggression, combined with his southpaw style, was giving Colbert trouble. Colbert tried staying away from his man in the sixth. Garcia, however, was still able to corner him.

Garcia then dropped his man in the seventh. Colbert got up, but he had to avoid Garcia in order to survive the round. Getting Colbert in a corner, Garcia fired away. Yet Colbert, to his credit, was able to weather the storm. In the eighth, it looked once again like Garcia might stop Colbert in the corner. Again, however, Colbert survived. Colbert came out energized in the ninth, no doubt in the hopes of turning the tide on his man. Again, though, Garcia was able to batter away at Colbert in the corner.

By the tenth, Colbert was literally just holding on. He was taking a pounding and essentially offering nothing in return. Colbert clearly had nothing left in the eleventh, except his legs, which he used to avoid his aggressive opponent. At one point, Garcia threw up his arms in frustration. Colbert came out furiously in the twelfth, but went on to spend much of the round in retreat. Needless to say, the judges awarded Garcia the unanimous decision win.

Without a doubt, this was a huge upset in the fight world.