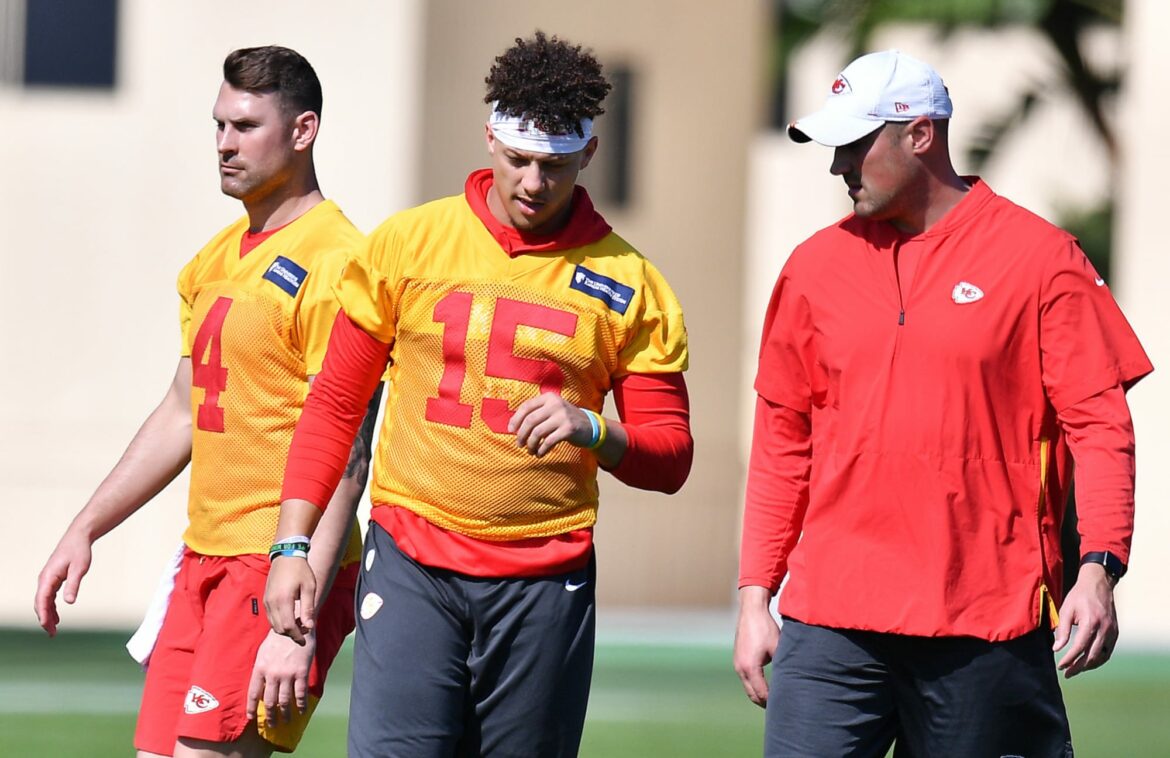 With the Giants rebuilding their offensive coaching staff, it seems they will steal away Chiefs quarterback coach Mike Kafka away from Patrick Mahomes.

When a situation is “kafkaesque”, it denotes a surreal, nightmarish landscape similar to the worlds  Franz Kafka created in his writing.

Losing a quarterbacks coach may not seem that dramatic, but for Patrick Mahomes, losing Mike Kafka to the New York Giants could affect his development in the 2022 season.

The #Giants are expected to hire #Chiefs QB coach Mike Kafka as their offensive coordinator, sources tell me and @RapSheet. Deal not done yet but that’s the way it’s headed.

The hiring of Kafka is good news for Giants quarterback Daniel Jones, who is now surrounded by the coaches who developed Mahomes and Bills quarterback Josh Allen.

The new head coach and new quarterbacks coach help develop Josh Allen. The new offensive coordinator helped develop Patrick Mahomes. The Giants are surrounding Daniel Jones with guys who can help him develop and save his career. https://t.co/KbcPpfTd3u

Kafka is a former NFL quarterback who played on the Philadelphia Eagles, Tampa Bay Buccaneers and Minnesota Vikings, among other teams. Working with the Chiefs since 2017, Kafka is the one who has helped the Chiefs offense flourish under their prolific signal-caller.

Mike Kafka has been with the #Chiefs since 2018, and helped groom Patrick Mahomes into what he is today. As the passing game coordinator the numbers speak for themselves. Still, Kafka has done an extraordinary Job

Mike Kafka was the passing game coordinator for the #Chiefs since 2018. Worked with Patrick Mahomes and helped that offense become one of the best in the league. He did not call plays but was a big part in the offensive game planning

The Chiefs have valued Kafka and his role in developing Mahomes greatly, evidenced by their decision to block him from being poached in the past. However, the Chiefs decided to let him be considered for a role with the Giants.

Mike Kafka has been blocked several times in the past, but there was a thought that this offseason that wouldn’t be the case. He’s been extremely valuable to Patrick Mahomes’ growth in KC and deserved an OC position. https://t.co/LgBSoVd4eG

Mahomes credits Kafka with his development and success.

“He came in at the same time as I came into this locker room,” Mahomes said. “Even before he came in as quarterbacks coach, he already had a big imprint on what I did in developing me to be the player that I am. He continues that. He stays on me.”

Although Kafka may be ready to move on, his expertise is needed after Mahomes and the Chiefs lost the AFC Championship to the Cincinnati Bengals. Despite Mahomes’ athleticism and mobility out of the pocket, the powerful Chiefs quarterback often tries to make passes on unnecessarily broken plays and aborts the pocket unnecessarily.

Mahomes needs to smooth his fundamentals and work on his in-pocket plays and reads this offseason, and Kafka would have been an important key to that development. Without him, the Chiefs will need a strong replacement to help Mahomes become and even more elite quarterback.