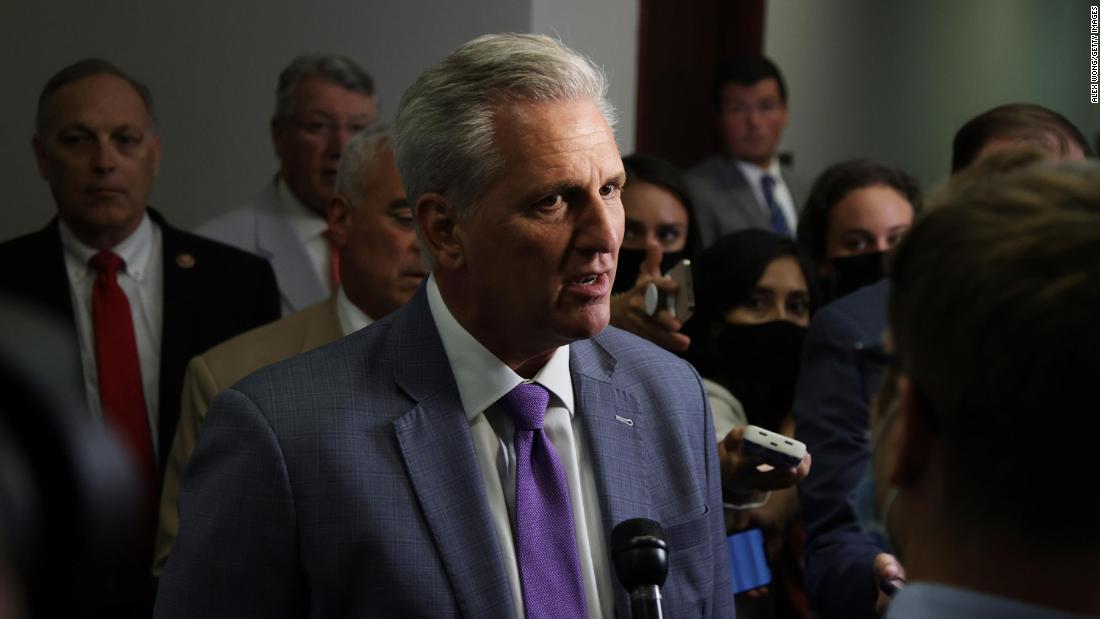 Emerging from her meeting, Greene told CNN that both she and former President Donald Trump would back a primary challenge to Mace in 2022.

And after she met with McCarthy, Mace had this to say when asked about Greene’s threat: “All I can say about Marjorie Taylor Greene is bless her f***ing heart.”

At the center of the feud: McCarthy, a California Republican who typically avoids public condemnation of his colleagues and opts instead to hold private conversations with his members — all in a bid to keep the peace between the warring wings of his conference and bolster his own chances of becoming speaker after the 2022 midterm elections.

But his failure to tamp down the attacks — largely from the right wing of his conference against his more moderate colleagues — is causing growing concern in the ranks, with one GOP lawmaker calling Greene in particular “poisonous” to the party.

“If Kevin McCarthy does not get Marjorie Taylor Greene in line somewhat, either through the conference disciplining her, or privately, it is going to undermine our efforts,” the lawmaker said. “And this is where leadership can step up. And I think if he doesn’t, you’re going to have a bit more of a civil war on your hands.”

The tension comes after Greene repeatedly called Mace, a Republican from a swing district, “trash.” The reason why Greene bashed Mace: The South Carolina freshman had condemned another conservative Republican, Lauren Boebert of Colorado, for saying that Rep. Ilhan Omar, a Minnesota Democrat who is Muslim, could be mistaken as a terrorist.

McCarthy, who has been struggling to keep his party focused on its ultimate goal next year, seems to be recognizing that it’s time to redirect members’ focus. Moments before Mace entered his office Tuesday evening, McCarthy told CNN he had a message for both Mace and Greene: “Stop it.”

But despite McCarthy’s efforts to privately cool the intraparty tensions, his tactics don’t seem to be having much of an effect on the far-right conservatives.

After leaving the meeting with McCarthy, Greene told CNN that she and Trump would back a primary challenge against Mace, the first woman to graduate from The Citadel military college, who had been seen by party leaders as a top recruit last cycle.

“Obviously, I love that man,” the Georgia Republican said of Trump, whom she had spoken with earlier in the day. “And I have his support 1,000%. And unfortunately, Nancy Mace doesn’t.”

“I will be very supportive of a primary challenger (to Mace), along with President Trump,” Greene added.

Returning to session Tuesday after the Thanksgiving recess, senior Republicans said the focus of their party must change immediately in order to capitalize on the major advantages they currently enjoy in the fight for the House majority next year. If not, they said, self-inflicted wounds could give Democrats an improbable victory.

“Yeah, I do,” Rep. Fred Upton, a veteran Michigan Republican, said when asked whether he thought the most recent eruption over Boebert and Greene hurts their chances at taking back the majority. “It’s uncalled for.”

Upton added: “It’s tit for tat. Where’s the shovel? This needs to end.”

“Have you ever seen a team where they should be winning, and you’ll just look on the sidelines and then coach is yelling at a player, players yell at the coach and it doesn’t show they’re on track to win,” said Rep. Brett Guthrie, a Kentucky Republican. “Anytime we’re not focusing on what they’re doing and what we want to do, I think it’s not a good thing.”

The aggressive attacks against fellow Republicans also have come from Trump’s most loyal supporters, putting McCarthy in an awkward spot as he tries to stay in the good graces of the former President while also trying to focus his party to stay unified against President Joe Biden’s sweeping agenda.

That dynamic was in full display earlier in November when another member of the hard-right faction, Rep. Paul Gosar of Arizona, tweeted an animated video where he acted violently toward Democratic Rep. Alexandria Ocasio-Cortez of New York and Biden himself. That earned him a rare censure from the House, which also stripped him of his committee assignments. But McCarthy chose to deal with Gosar privately — and rallied his conference to reject the efforts by Democrats to punish him.

In the most recent episode involving Boebert and Greene, McCarthy tried to work behind the scenes to tamp down intraparty tensions. He tried to broker a meeting between Boebert and Omar, while later calling Greene on Friday after she criticized his leadership. McCarthy also spoke on the phone with Mace on Tuesday after the South Carolina Republican fired back at Greene, whom she characterized as “bats*** crazy” in a series of emojis on Twitter.

Louisiana Rep. Steve Scalise, the GOP whip, who could be the majority leader next Congress, told CNN that it’s time for House Republicans to refocus on issues — something he said would be a focus of a Wednesday meeting with his full conference.

“Inflation crisis, border crisis, energy crisis, confidence crisis and Joe Biden’s policies — that’s what the focus needs to be on, and how we can solve these problems that they’ve created,” Scalise said. “Everybody’s been away for Thanksgiving. And now that we’re back, we’ve got to get back focused on the things that matter to families back home.”