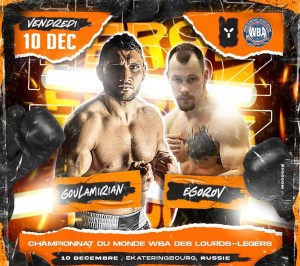 The Frenchman of Armenian descent, Arsen Goulamirian, will fulfill his mandatory defense of the World Boxing Association (WBA) Super Cruiserweight Championship against Russian Aleksei Egorov, in Ekaterinburg, Russia, this Friday.

The bout was ordered by the Championships Committee months ago and the bout was auctioned as part of the pioneer organization’s ongoing world title reduction plan. These are two undefeated, hard-hitting fighters who will go toe-to-toe in the ring.

Goulamirian will reappear after a significant time without fighting due to different circumstances and will face the former Gold champion of the division, who won the right to challenge the champion for having held that belt.

It will be the second defense for Goulamirian, who is 30 years old and has an impressive power, in addition to a very neat boxing and a remarkable physical strength.

The 27-year-old Egorov, last fought in March 2020. The Obninsk native will be facing the most important challenge of his career but with the advantage of being at home and having the public on his side.

The event will be organized by World of Boxing, the company that won the bidding held last August and promises to be a great show.