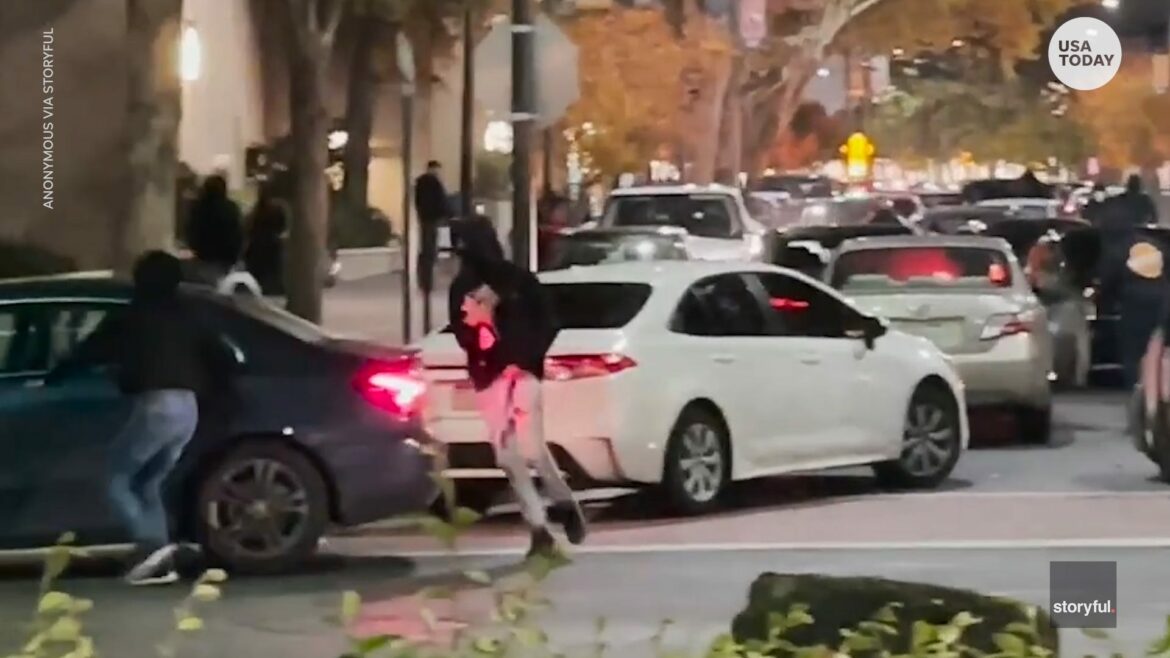 Five people rushed into a Nordstrom store in Southern California the night before Thanksgiving and fled with several purses, the latest incident in a string of grab-and-go thefts and organized robberies plaguing luxury stores.

Los Angeles police said a security guard was sprayed with an irritant meant to deter charging bears at the Westfield Topanga & The Village shopping center in Canoga Park. The stolen bags were estimated to be worth $25,000, local media reported.

The LAPD was also investigating a similar incident in which groups entered several stores in the Beverly Center on Wednesday, grabbed merchandise and ran out. And on Monday, about 20 people took roughly $5,000 of merchandise from a Nordstrom store at Grove mall.

Police have described the incidents as “flash mob thefts,” and they’ve been happening in several other cities across California.

In the San Francisco Bay area last week, more than 80 people stormed another Nordstrom armed with crowbars. Donning ski masks, the mob ran off with thousands of dollars of merchandise. Three people were arrested.

Here’s what to know about these recent thefts:

What is a ‘grab-and-go’ theft?

These incidents, which have been dubbed “grab and go” or “smash and go” thefts, involve people taking expensive items and running off, rather than traditional shoplifters who snag items here and there while shopping around.

Some of these thefts are also considered organized retail crime, which refers to professional shoplifting rings. They have cost U.S. retail stores and companies as much as $30 billion a year, according to the FBI.

Retailers and experts from the National Retail Federation say thefts have gotten more violent amid the pandemic and have moved from cities to the suburbs. With Black Friday and the start of Christmas shopping season, retailers say they’re worried more robberies may be on the horizon.

Where have they been happening?

There have been several thefts in major cities across California, including the San Francisco Bay area.

In San Jose on Sunday, about $40,000 of items was stolen from a Lululemon store, the Mercury News reported. In Palo Alto, police said two women were arrested after 30 to 40 people tried to break the glass door to a downtown boutique Sunday night.

Then on Wednesday, four men fled with $20,000 of merchandise from an Apple store in Santa Rosa, according to police.

“These brazen acts will not be tolerated in San Francisco,” said District Attorney Chesa Boudin in a Tuesday statement. “But the problem is bigger than our city.  Last weekend, there were similar incidents in Walnut Creek, Hayward, Oakland and San Jose.”

The thefts are also not specific to California. Police said over a dozen people in Chicago stole about $120,000 of items from a Louis Vuitton store on Nov. 17.

String of organized thefts:After Nordstrom robbery in California, will other retailers be next? Experts say yes.

Police in affected areas have increased patrols as stores have ramped up security.

Lynda Buel, president of Ohio-based security consulting firm SRMC, told CNN the decriminalization of low-level offenses in some states mean fewer consequences for people accused of participating in grab-and-go thefts. She said in California, a 2014 ballot measure raised the threshold for felony theft from $500 to $950.

“The threshold for a misdemeanor offense is $950 – meaning that a person can steal up to that amount and only be charged with a misdemeanor,” Buel said.