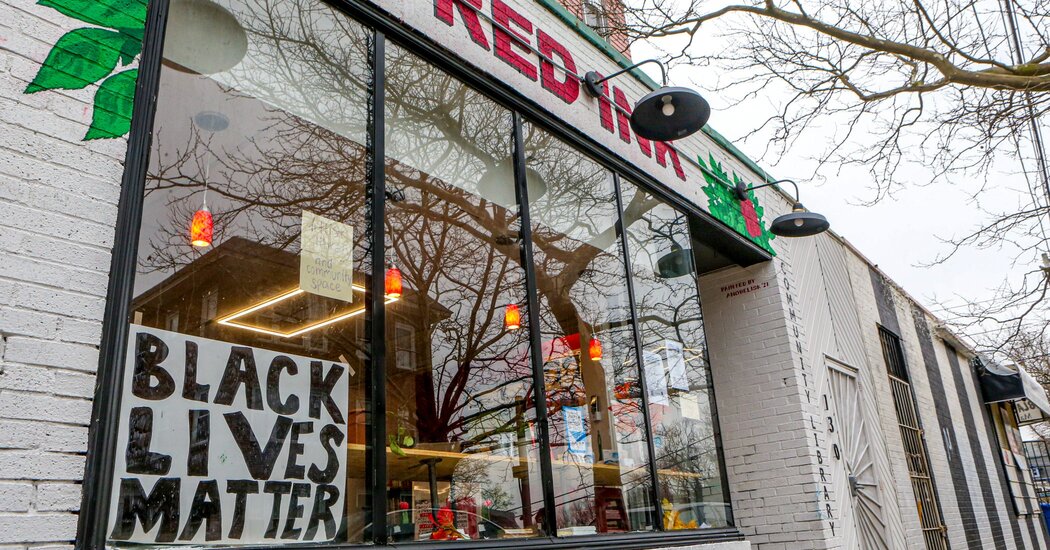 A reading at a storefront library in Providence, R.I., was interrupted on Monday night, when a group of people carrying a flag with a swastika banged on the windows of the building, shouted slurs and chanted “white power.”

The Red Ink Community Library, which describes itself as a “nonprofit community library, reading room and organizing space,” was hosting a reading of “The Communist Manifesto” by Karl Marx and Friedrich Engels for Red Books Day, celebrating the 174th anniversary of the day the manifesto was published.

In a video stream of the event, someone is seen reading from the manifesto when a sudden banging is heard offscreen, followed by a number of slurs being shouted. The person tries to continue reading, while a group is heard outside shouting slurs and “white power.”

After several interrupted attempts to continue reading, another person steps in front of the microphone and wraps up the event.

“Thank you everybody for joining us,” he says. “Fifty Nazis just ascended outside, so we’re going to finish this.” He continues reading briefly then steps out of the video frame right before the stream ends.

In a series of posts on Twitter, the library said its event was “interrupted by a crowd of fascists and Nazis.”

“They showed up on our sidewalk, banged on our glass windows, shouted horrible slurs, and attempted to assault our members,” the library said. “As they outnumbered us at maybe 10:1, there was little we could do other than tell them to go home and try to stay safe indoors.”

The Providence Police Department did not immediately respond to requests for comment on Tuesday night. The Providence Journal reported that about 15 to 20 people were gathered outside the event, and that no one was injured or arrested.

The library said on Twitter that the group outside “continued to put on their show” until Providence police officers arrived.

“While we didn’t ask for help from the police, it was only the threat of state violence that ended this disruption,” the library said. “While we knew of and wanted to highlight the relevance and importance of the Manifesto today, we did not want it to be so stark, so ugly.”

At times, the group outside the building is heard shouting “131,” which refers to the 131 Crew or the Nationalist Social Club, which the Anti-Defamation League describes as a neo-Nazi group with chapters across the United States. The group’s members, “see themselves as soldiers at war with a hostile, Jewish-controlled system that is deliberately plotting the extinction of the white race,” according to the anti-hate organization.

Other videos of the event show the group carrying a red and white flag with a black swastika.

“There is no place for hate in our communities or state,” Gov. Dan McKee of Rhode Island said in a post on Twitter. “The video showing a group waving Nazi flags last night in PVD is unacceptable and disgusting. I stand with those condemning last night’s acts.”

In a statement on Tuesday, Jorge Elorza, the mayor of Providence, said the city was “home to diverse people, cultures, and ideas and our city has no room for hate-filled actions meant to intimidate and cause fear.”

“My administration is committed to making every resident feel safe and protecting the rights of people who are gathering peacefully,” Mr. Elorza said.

Members of the Nationalist Social Club participate in demonstrations and counter-protests and appear at mainstream events, according to the Anti-Defamation League.

The group, which started in 2019 as the New England Nationalists Club, “seeks to form an underground network of white men who are willing to fight against their perceived enemies through localized direct actions,” according to the anti-hate organization.

In a joint statement, the Jewish Alliance of Greater Rhode Island, the Board of Rabbis of Greater Rhode Island and the Sandra Bornstein Holocaust Education Center said that the demonstration outside the library was an “alarming incident” and that similar episodes are occurring more frequently in the state and the region.

“This is abhorrent,” the statement said. “Our shared humanity relies on a society that does not hate or discriminate. We must respond collectively with conviction, exposing hatred to the light.”