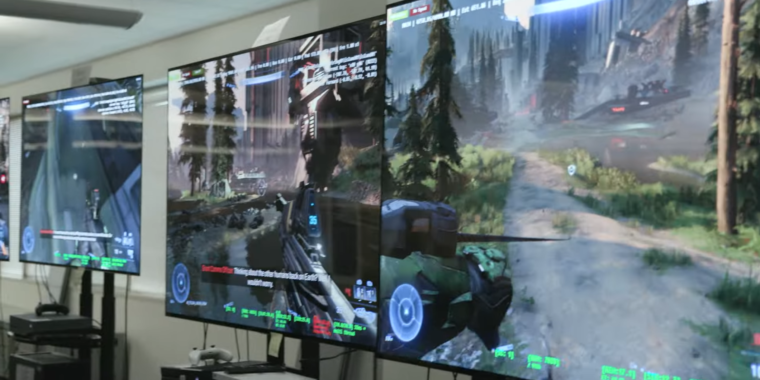 The latest Halo Infinite development update has confirmed that the highly anticipated shooter sequel is still slated to land in the vague time window of “Holiday 2021.” But the latest news confirms that the game will ship with a bit less content than series fans might have expected. For the first time in the series’ history, a Halo shooter game will launch without multiplayer co-op as an option for its “campaign” half.

Joseph Staten—a longtime Halo writer and producer who currently serves as Creative Lead of the 343 Industries studio—presented the bad news in an update video on Friday, after going so far as to assert that “campaign co-op is fundamental to the Halo experience.” Though Infinite will eventually get co-op, it won’t be ready as part of the product being sold (or included in paid Xbox Game Pass subscriptions) later this year. The technical reasoning behind the mode’s delay is unclear, but fans may be able to read between the lines of Staten’s explanation about why co-op has yet to reach his team’s “quality bar.”

[The campaign] is this wonderful, wide-open nonlinear take on a Halo campaign. It’s gonna offer so much more flexibility: take down Banished [enemy] bases from different angles and progress through the game in your own way. At the same time, that’s complicated when you think about save systems and all the technology that’s needed to drive this nonlinear experience. In a co-op scenario, that’s even more complicated.

Staten doesn’t go into further detail than that, though other parts of the presentation confirm the studio’s current efforts to scale the game’s campaign and versus modes on everything from a base Xbox One to a high-end PC. And the presentation doesn’t include a firm confirmation that co-op will eventually arrive on every compatible device, either locally or online.

The presentation does confirm that “split-screen” options will land in the final game on all consoles, though this news came as part of a conversation about the free-to-play versus-multiplayer side of the Halo Infinite package. As Halo producer Bonnie Ross confirmed years ago, all future first-person Halo games will include split-screen options for local multiplayer; that decision was made after the company was hammered for dumping split-screen support from Halo 5.

However, this is only for console players, as the game’s PC version won’t have split-screen options at launch. Staten’s carefully worded statement doesn’t inspire confidence that split-screen will ever arrive. “It’s something the team is absolutely excited about exploring post-launch,” he said. (That is the opposite of a commitment to PC split-screen modes.)

Like the Halo Master Chief Collection, Halo Infinite will revolve around a “season” philosophy of regular updates, each lasting “about three months.” Staten says that his team is “targeting” a campaign co-op launch with Infinite’s second season, followed by another delayed feature coming in the game’s third season: the “Forge” customization suite.

This news is less surprising, as Halo 5 also delayed its Forge mode until roughly two months after its October 2015 launch. All Halo shooters since Halo 3 have included Forge modes to let players create and share custom multiplayer levels and rulesets. Staten assured fans that they can expect Forge testing access a bit earlier than the launch of the game’s third season if they take part in Halo Infinite’s “flight” series of prerelease tests. (Hopeful co-op fans did not get the same assurance about flight access.)

After clarifying those content delays, Staten insisted that 343 Industries and Xbox Game Studios are “100 percent committed” to launching Halo Infinite’s single-player campaign mode and free-to-play multiplayer by the end of 2021. The video confirmed that the team had mulled delaying the entire game, once again, to have co-op ready at launch. However, Staten insisted that this staggered release fits the game’s release philosophy. “Halo Infinite is a live game,” he said. “It’s never really done. It’s going to progress and evolve from season to season. To have a beginning, we need to pick a moment and actually begin.” That moment, then, is one without co-op.