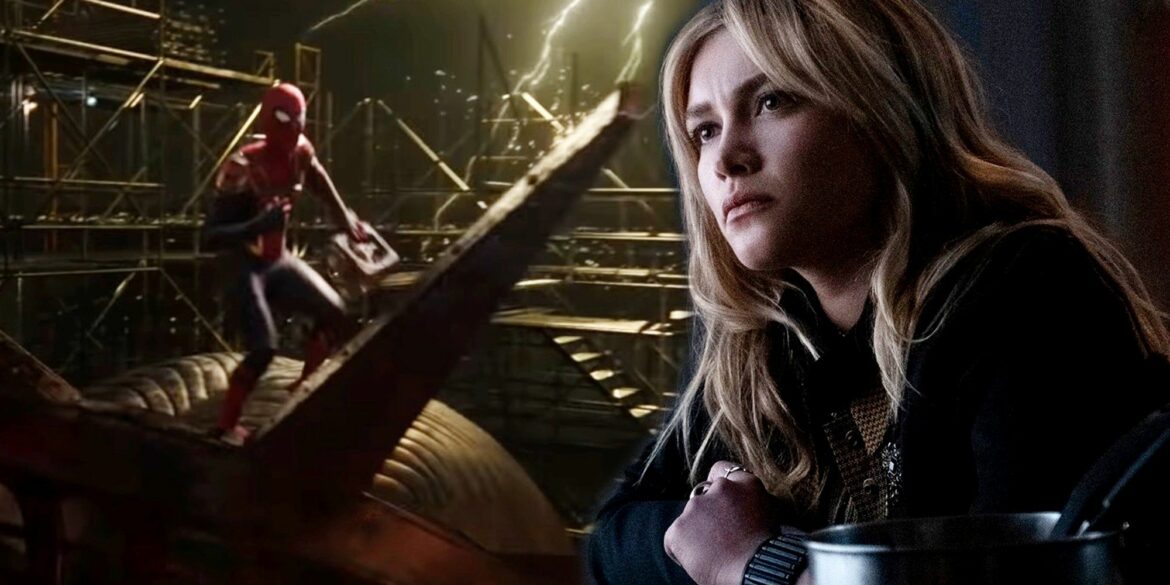 Hawkeye directors Bert and Bertie reveal how they referenced Spider-Man: No Way Home in the Disney+ series during Yelena and Kate’s talk.

Warning: This Article Contains Spoilers For Spider-Man: No Way Home.

Hawkeye directors, Bert and Bertie, reveal details on how they referenced Spider-Man: No Way Home in the Disney+ series during Yelena and Kate’s talk. The latest episode of the Disney+ Marvel series starring Jeremy Renner and Hailee Steinfeld included many wider connections to the MCU. Alongside Renner and Steinfeld, the series stars Florence Pugh, Vera Farmiga, Linda Cardellini, and Vincent D’Onofrio.

In Hawkeye episode 5, “Ronin,” Yelena ambushes Kate (Steinfeld) at her apartment after the young hero is pushed away by Clint (Renner) once he feels their mission is too dangerous to involve her. The two discuss Yelena’s mission over mac and cheese with hot sauce that the assassin has prepared, attempting to understand one another better. During the conversation, Yelena mentions her own personal sightseeing list of things to see while she was in New York, mentioning the “New and improved Statue of Liberty.” Fans quickly picked up on Yelena’s line, pointing out Spider-Man: No Way Home featured a redesigned Statue of Liberty lifting Captain America’s shield that was the setting for the film’s final battle, where the three Spider-Men lured the remaining multiversal villains to cure them. Following both the recent episode and the film’s release, Bert and Bertie have revealed how the reference came to be.

Related: MCU Theory: Spider-Man Will Appear In The Hawkeye Finale

As reported by ComicBook.com, both Bert and Bertie were asked in a recent interview with THR whether they were aware of the No Way Home set-piece in advance when working on the Disney+ series. Bertie revealed that they were told about the Statue of Liberty improvements, but things were kept on a need-to-know basis. The director then expressed that they like knowing the small details, as well as being able to weave aspects of the MCU together. Check out Bertie’s answer below:

“We did. There’s a need to know basis. Things like that, there may have been a slightly larger reference to it in the original scripts. We love knowing that stuff. “Oh! That’s so cool.” Just how things weave together. That’s one we were aware of,”

Spider-Man: No Way Home is set before the events of Hawkeye, with No Way Home taking place largely in the summer/autumn of 2024, while Hawkeye takes place at Christmas. In No Way Home’s climax, the iconic landmark is still being worked on and surrounded by scaffolding, while Yelena’s dialogue suggests that the monument is open for tourists. Spider-Man: No Way Home also contains a nod to Hawkeye in the form of “Rogers: The Musical” posters, referencing the show that Clint and his children watch in the season premiere.

The Statue of Liberty’s presence in these MCU stories not only connects the two projects, but can be used to explore the universe. In Avengers: Endgame, Liberty Island is used as a marina for survivors of the Blip, while Spider-Man: No Way Home and Hawkeye use it to build on the post-Endgame world. Each appearance has helped show how these heroes’ actions would change the world, creating a truly lived-in universe.

Next: Hawkeye Reveals The Disturbing Truth Of Superhero Worship

Nathan is a young writer whose interest in film started when watching behind-the-scenes features on DVDs as a kid. He graduated with a degree in Film Studies. He has an interest in stories, how they can affect people and inspire. Nathan also has a fondness for comics and games, doing his best to keep up to date.