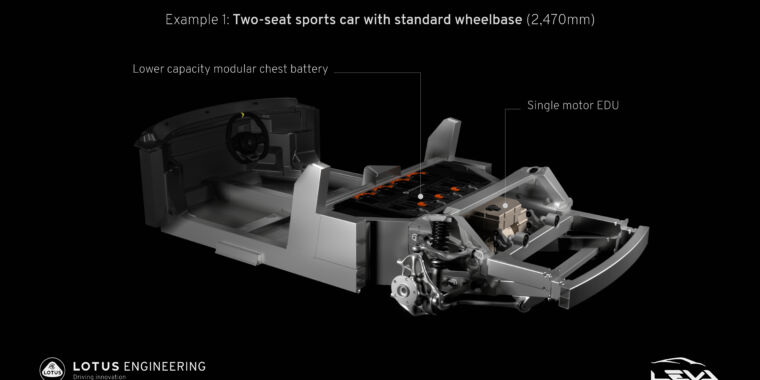 Lotus Cars is developing a lightweight electric vehicle architecture for sports cars. It uses a die-cast rear subframe that packages the drive unit. For two-seaters, the battery pack goes behind the passenger compartment.

This architecture can also create larger two-seaters with a bigger mid-mounted battery pack. In this application, the rear subframe contains a twin-motor electric drive unit.

For EV sports cars with small back seats (known as 2+2s), Lotus will use a more conventional skateboard layout for the battery pack.

Of all the automakers that are undergoing the transformation from internal combustion to electric propulsion, few have my interest quite like Lotus. Partly that’s because I first became a car nerd after discovering the Lotus Seven. But it’s also because light weight has always been a core Lotus attribute, and while electric vehicles have much to recommend them, “light” they typically are not.

This would be immaterial until relatively recently, because the small British sports car company didn’t have the resources to consider a switch to electric. But in 2017 Lotus was bought by Geely, also the owner of a freshly revitalized Volvo. As is the Geely way, Lotus got some much-needed investment and has been set to work on electrification.

In April of this year Lotus revealed that its plans now include four new platforms, three of which are entirely electric. This week we got a glimpse into the way the company is thinking about EVs, as it released some details about its lightweight electric vehicle architecture (or “Project LEVA” in Lotus-speak). The key is a newly developed rear subframe that’s far lighter than the one in the V6-powered Emira (unveiled in July as the last internal combustion engine-powered Lotus).

The rear subframe is made from die-cast aluminum and cleverly supports more than one kind of powertrain layout. There is the conventional skateboard approach, where a big slab of batteries fills the floor of the car between the axles, as seen on basically every battery EV on sale today. Lotus says in this configuration it can build 2+2s with wheelbases of at least 104.3 inches (2,650 mm), with 66.4 kWh battery packs and either a single motor drive unit with a maximum output 470 hp (350 kW) or a twin-motor drive unit with a maximum of 872 hp (650 kW).

A skateboard isn’t always the answer

But for pure two-seat sports cars, the skateboard layout is not entirely ideal. In these applications, a lower ride height and lower overall vehicle height is important, and so instead of putting the cockpit on top of a big slab of batteries, Lotus will use what it’s calling a “chest” layout.

Here, the battery pack is mid-mounted, like the engine in one of Lotus’ current cars. (This is the same powertrain layout Porsche went with for the Mission R concept, and it’s also employed by most of those unobtanium electric hypercars with telephone number price tags.) Advertisement

Lotus says that mid-mounting the battery leads to two possible layouts. For the smallest and lightest electric sports cars, that means a wheelbase of at least 97.2 inches (2,470 mm); for context, a Lotus Elise has a wheelbase of 90.6 inches (2,300 mm). These small EVs would carry a 66.4 kWh pack, and use a single electric drive unit of up to 470 hp.

For larger two-seat sports cars (think Lotus Esprit rather than Lotus Elise), the wheelbase can be extended to at least 104.3 inches. These cars would feature the twin-motor drive unit and a 99.6 kWh battery pack.

“Project LEVA is as revolutionary now as the Elise architecture was in 1996. In true Lotus spirit, significant weight savings have been achieved throughout, with a focus on ultimate performance, efficiency and safety being engineered into the structure from the outset—for example, by utilizing the vehicle structure as the battery enclosure, having an integrated EDU, eliminating subframes and optimizing the multi-link suspension components,” said Richard Rackham, head of vehicle concepts at Lotus and the lead engineer on Project LEVA.

Unfortunately, we’re still in for a bit of a wait for the first lightweight Lotus EVs, which aren’t due until 2026. But we may well see the architecture used much sooner by other OEMs—Lotus will offer it to third parties via the Lotus Engineering consultancy.