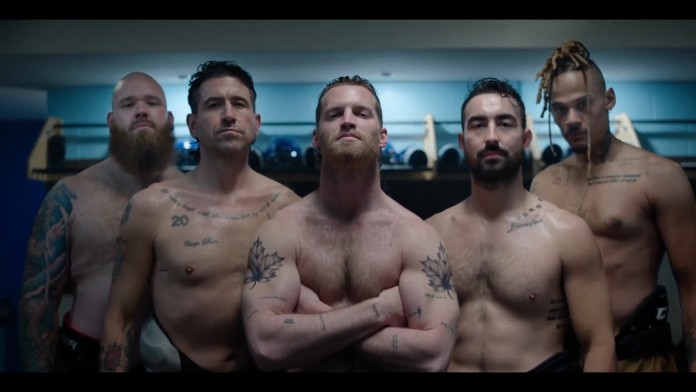 Shoresy is the foul-mouthed, chirp-serving, mother-loving, fan-favorite character, and this show sees him join a senior AAA hockey team in Sudbury on a quest to never lose again. Of course, you may already know this new series is a Letterkenny spin-off that will soon premiere, and we will be able to watch it online quite easily. We have all the information you may need on the cast, plot, and release date, so let’s see when, where, and how to watch Shoresy online from anywhere in the world.

Shoresy is played by Jared Keeso, but within Letterkenny, he is only seen in contexts that obscured his face, as Keeso simultaneously plays the leading role of Wayne. During the Season 10 Letterkenny episode called “VidVok”, Tanis explains to Wayne that she got Shore on the Sudbury Bulldogs and will be moving soon, and this episode sets up the spin-off series. The plot here follows Shoresy trying to prevent his team from folding, and together with his new recruits, attending a team mixer at Nat’s. The Bulldogs face off against the Timmins Timber Kings and the infamous Apeldoorn brothers, Shoresy attends his family reunion, and the Bulldogs play the North Bay Norsemen.

“In the spirit of Letterkenny, the humor is funny, mad, droll, childish, and spiky. Full of salty Canadian vernacular, it soars. There are more visual jokes than you might find in the average episode of Letterkenny, but the flavor is the familiar tone of boldly irreverent, and it is sometimes slashing satire with more puns than you can count. In an expected but delightful way, Shoresy is Letterkenny refreshed,” The Globe and Mail praised the show.

Shoresy is set to premiere on Friday, May 27, 2022, and you will be able to see it on Hulu. Season 1 will have six episodes, and we will get two per week every other week. As it usually happens with new content on streaming services, new episodes usually sometime after midnight PT (03:01 am ET).

How to Watch Shoresy Online From Anywhere

If you want to watch content online in your home country right now, things are pretty easy as long as you subscribe to one of the many streaming platforms available nowadays. However, as you may already know, things change if you plan to travel abroad or even to some other states since these services have geo-restrictions in place. This means you may not be able to access some of the titles in your library and will need to watch Shoresy using a VPN to lift the geo-blockades. These tools change your IP address, making it seem like you are back home.

We recommend you use ExpressVPN if you don’t know what service to choose since it’s extremely easy to use and can easily unblock a lot of streaming services such as Netflix, Hulu, BBC iPlayer, and several more. It has a no-questions-asked money-back guarantee included, so you should consider this tool because you can try ExpressVPN for 30 days RISK-FREE. This VPN is one of the best tools and most reliable one on the market right now, it has fast and stable connections and strong encryption to protect your data online, and you will get access to over 3,000 servers in countries all around the world.

To get started with your risk-free subscription and take advantage of a nice deal for the annual, you need to subscribe to ExpressVPN (49% Discount and 3 Months FREE) on their website. The process has a few easy steps that take a few minutes of your time. Start by filling in your details to create an account, then make the payment, and download and install the native app for your device or system. Finally, open the VPN app, select a server from a location back home, and turn on the tool. Once it’s running, you can open the streaming service to watch Shoresy online from anywhere after it premieres on the platform since all geo-blocks are lifted.

How to Watch Shoresy Online in the US

Since this title is a Hulu original series, the best and easiest thing you can do is subscribe to the Hulu On-Demand service and access Shoresy from the library. You just need to fill in your details to create an account on the platform and then select one of the two base plans available: the ad-supported Hulu plan is $6.99 per month or $69.99 per year, and the commercial-free Hulu plan costs $12.99 per month, and both of these plans have a generous 30-day free trial on Hulu.

However, there’s a special promotion running for a limited time that offers the ad-supported plan at $1 per month for the first three months and takes the free trial off the table.

Hulu includes thousands of hit shows, movies, and more, and you can also customize by selecting Premium or Partner Add-ons such as HBO Max, Showtime, STARZ, and others, for an additional monthly fee.

Watch Shows and Movies Anytime, Anywhere from current episodes and original series, to kids shows and hit movies, we have something for everyone.

There’s another option besides the standalone service for the United States customers, who have a pretty sweet deal on offer right now: The Disney Bundle offers three services, and you save 25% if you subscribe to this bundle compared to the monthly cost of subscribing to these three services separately. With this bundle, you can get Disney Plus, ESPN Plus, and Hulu with or without ads at a discounted price, and you can get The Disney Bundle with the ad-supported Hulu plan for $13.99 per month, and the Hulu (No Ads) plan for $19.99 per month.

If you’re traveling away from the US, you may lose your access to your library or service in some countries or states due to geo-restrictions. However, you can circumvent this issue by using a reliable VPN that can unblock the streaming platforms abroad. More details are in the segment above.

How to Watch Shoresy Online in Canada

If you live in Canada, Shoresy Season 1 is hosted exclusively on the Crave service, which offers HBO Max, HBO, and also Starz, and Showtime. You get a 7-day free trial upon creating your account with the service if you’re a new customer, and the subscription price is $19.99 a month after that. You can also log in with tour TV provider credentials.

This service is geo-restricted due to licensing deals, and you won’t be able to access your subscription if you decide to travel abroad when the episodes air. We recommend you use a good VPN set to a Canadian server simultaneously with the streaming platform to easily lift the geo-blocks.

How to Watch Shoresy Online in Australia

The Letterkenny spin-off will also be available in Australia. Fans will see the series on SBS On Demand for free as long as you create a free account on the platform, where it will premiere on Saturday, May 28, and it will also air on SBS Viceland starting Wednesday, June 8.

Since almost all streaming platforms are geo-restricted, you won’t be able to access this service while traveling abroad. You will be able to bypass this issue if you decide to use a strong VPN to lift the blockade for you. Just set your VPN server to Australia and turn it on before accessing the streaming service.

How to Watch Shoresy Online in the UK

Even though we have no official news on the release date here, we know it will become available in the UK later on. However, we expect the streamer that will host it to be the Disney Plus Star service. The subscription here costs £7.99 per month (or £79.90 per year) and offers access to the entire library, which hosts various titles from Disney, Marvel, Star Wars, Pixar, National Geographic, and The Simpsons, among others.

Almost all the streaming services out there are geo-blocked, so you may not be able to access some titles on the Star service of Disney Plus while abroad. We recommend you get a capable VPN to lift geo-restrictions. For this to work, select a server located in your home country and then access the streaming platform.