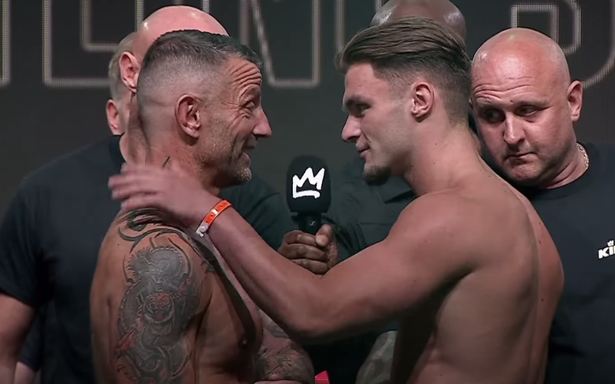 TikTok star ‘Simple’ Simon Colbran, 52, and fellow internet celebrity Ed Matthews, 19, both make their ring debuts as the pair meet in the main event of a Kingpyn event tonight in London.

Colbran, who has over 400,000 followers on TikTok, clashed heads with Matthews earlier this year on the social media platform after collaborating with ‘Cal The Dragon’. Matthews mocked the 52-year-old for making videos with 21-year-old OnlyFans star Astrid Wett because of their age disparity, which eventually setup a fight between the pair.

Matthews has involved Colbran’s 18-year-old daughter Keeley in the build-up to the fight, producing a sex toy for Colbran to gift her at their press conference last month. Colbran snapped back at Matthews during their weigh-in on Friday by releasing a cringeworthy ‘diss track’ aimed at him. So here’s all you need to know about their grudge fight tonight…

How to watch via TV and live stream

The ‘Settling Scores’ event is being broadcast exclusively on Kingpyn’s website. All seven fights will be available to watch on the pay-per-view which will cost fans in the UK £6.99. You can purchase the pay-per-view here.

Where is the fight and what time will it start?

The fight takes place tonight at The O2 Indigo in London. The event is scheduled to begin at 7pm UK time. Colbran and Matthews’ fight is the main event meaning it will likely get underway between 9:30pm and 10pm, depending on how long the six undercard fights last before it.

Paddy Murphy vs Dave The Other Guy