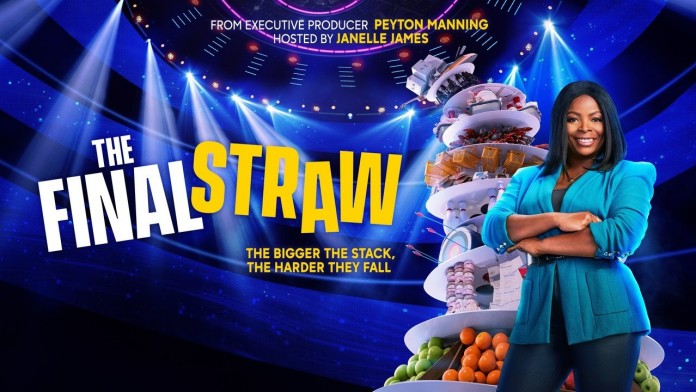 Are you ready for another competition show? Well, this time, you’ll get to wind off and have a laugh with this new show that will soon premiere. All the episodes will be available online as well, so let’s see where, when, and how to watch The Final Straw online from anywhere.

The Final Straw pits teams against each other as they try to remove items from a giant stack (you’re right to think about the Jenga game) – and the whole situation is accompanied by hilarious commentary from host Janelle James.

This “larger-than-life” competition series sees 4 teams of colorful contestants compete in an epic battle against gravity and physics as they attempt to remove things from enjoyably themed stacks.

The fun part of this new format is that each life-sized themed tower is chock full of various objects, ranging from basketballs to small kitchen appliances.

That’s quite an incentive, right?

The Final Straw premieres on July 10, 2022, on ABC at 9 pm ET. There are 6 episodes that we know of at this point, and one new episode will air each week on Sundays. The series will join a fun lineup of game shows that will air on Sunday, July 10, on ABC, such as Celebrity Family Feud and The $100,000 Pyramid.

How to Watch The Final Straw Online From Anywhere

Nowadays, streaming movies and series online is easy because of the numerous live TV and streaming services available in your home country. When you leave the country, things change because these services are geo-blocked due to licensing deals. To bypass geo-restrictions, we recommend you watch The Final Straw with a VPN subscription. A VPN can help change your IP address by routing your internet connection through several VPN servers, making it seem like you’re at home.

One of the most popular VPNs these days is ExpressVPN, a very straightforward tool, even for beginners. We recommend it because it can easily unblock streaming services such as Netflix, Hulu, and Sling TV, as well as live TV platforms, and it has thousands of servers worldwide to help you with that. ExpressVPN offers a no-questions-asked money-back guarantee, which means you can try ExpressVPN for 30 days RISK-FREE before deciding whether you need a refund.

So head to its website and select the annual plan if you want to get a big discount when you subscribe to ExpressVPN (49% discount + 3 months FREE). Enter the requested details and follow the instructions to create an account, then download the native app for your device. After the installation is complete, pick a server from back home, and you’re good to go. Finally, just load the streaming service to watch Final Straw online from anywhere.

How to Watch The Final Straw in the US

The Final Straw is an ABC show, which means this is the only channel that has it. ABC is actually easy to live stream through several live TV services, so let’s see how you can watch the show online in the US.

How to Watch The Final Straw Without Cable

You can find ABC in the channel list the fuboTV service offers, and it is featured in all the fuboTV plans. Subscription prices start at $69.99 per month, and you can also qualify for a 7-day free trial if it’s the first time you subscribe to the platform.

Hulu + Live TV is a great option right now, as it has ABC in its single plan, and it also offers Disney Plus and ESPN Plus for free with the subscription. Prices start at $69.99 per month, and you also get access to Hulu’s on-demand library and the Live TV service.

YouTube TV is also home to ABC, as the channel is featured in the service’s single plan. The subscription is $54.99 for the first 3 months, and the price goes up to the regular $64.99 a month after that. YouTube TV comes with a 10-day free trial, and you also have a few customization options.

You will also find ABC in all the plans offered by the DirecTV Stream service. Prices start at $54.99 a month for the first 2 months and $69.99 monthly after that, and you will get Cinemax, Starz, Epix, and Showtime for free for the first 3 months with all of them. There’s also a free trial included for new members.

You may also be able to see the show’s episodes on the ABC website or the ABC app, later on, so we recommend you use one of the services above if you want to watch The Final Straw sooner.

Keep in mind that live TV and streaming services are geo-blocked whenever you travel abroad, so you will have to turn on a reliable VPN when traveling. Just pick a US server and switch on the VPN app.

Can I Watch The Final Straw in the UK, Canada, or Australia?

Unfortunately, we didn’t find any information regarding when this US show will be available to watch in the United Kingdom, Canada, or Australia. However, you will be able to watch The Final Straw online if you use a VPN subscription, and it’s pretty easy to do so. Take a look at how to watch ABC outside the US.