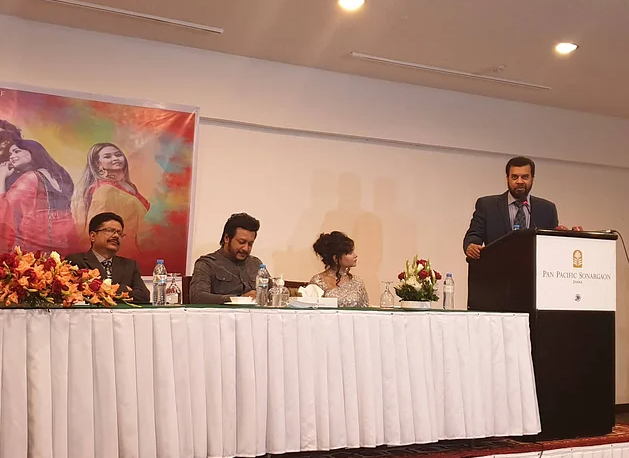 After becoming the president of Bangladesh Film Artists Association, Ilyas Kanchan went to a function as a guest. “If I can’t bring the producers back, I won’t have a face,” he said. He was speaking at the opening ceremony of a music video at a five-star hotel in the capital on Saturday night.

Speaking as the chief guest, Elias Kanchan said, “Our once famous producers have left the cinema. Before the election of the artist association, I said, we will all take this place forward together. Now that I have been elected, if I can’t bring back those producers now, if they don’t make at least one movie, I won’t have a face. Ananya Mamun is a director, producer. I want him to announce at least one new movie on this occasion. ‘

Kamal Mohammad Kibria, former leader of Chitranayak Nirab and Producers’ Association, was present as a guest at the inaugural function of a music video titled ‘Mayay Bendhech’ directed by Ananya Mamun. Also present were Parna, model Emon and Sabrina Rima. Elias Kanchan added, “The way new stars are presented in movies in our neighboring countries, they are not lost. That’s how we have to work with newcomers to the film. Then we will make good artists, good films will be made. ‘

Emon said, ‘I have never done a music video before, despite the opportunity. I did this because of the unique Mamun. Because, I have faith in his work. Speaking of which, starting from the melody, the video making of the song has been beautiful. ‘ Former Lakstarka Sabrina Rima, a song model, said, “I have never had the privilege of seeing a talented actor like Kanchan Bhai face to face. I met him face to face for the first time. I am grateful to him, he has come to congratulate us on our work. We have to move forward with the blessings of talented artists like them.