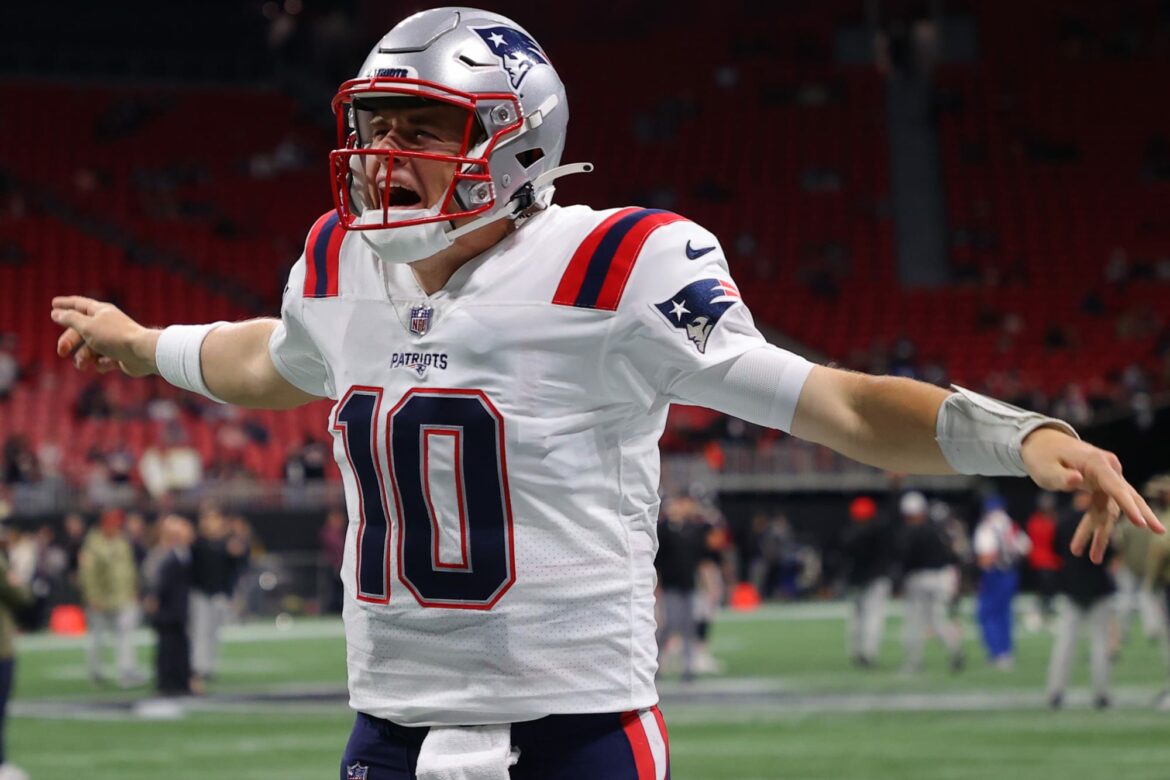 That phrase, or some variation of it, has been floating around NFL circles since Jones was drafted — and even before.

For some, it was a joke, as memes cropped up comparing the pre-NFL physicality — or lack thereof — of Jones and Brady in their early 20s.

Well @TomBrady if you were tired of seeing your shirtless pictures on Draft Day this year, I can only imagine how fun it will be once they start making Patriots Mac Jones comparisons pic.twitter.com/CgMzJDjJMo

But lately the comparison have had to do less with lankiness and more to do with the oft-mentioned “intangibles” that elite quarterbacks possess.

While many NFL fans laughed when Bill Belichick selected Jones with the 15th overall pick instead of trading up for someone like Justin Fields or Trey Lance, the cold take has now turned to mockery for those who underestimated Jones.

As the NFL season enters its homestretch, the Patriots are 7-4. Two games were lost by two points or less, and one of game was lost in overtime. Narrow defeats that had they gone differently, the Patriots may be 10-1. An optimistic imagining, of course, but it’s a point that demonstrates how competitive this team has been all year.

The curiosity of the team doesn’t end there; the Patriots scored 63 unanswered points in their last 7 quarters of football, and just 13-points have been allowed over their last 3 games. The team now has as many wins now as they finished with in 2020, and Jones has more wins than all other 2021 rookie quarterbacks combined.

Jones is the first rookie quarterback with an 80 percent completion percentage in two consecutive games. He’s also only the third quarterback in NFL history to win five or more consecutive road starts.

Stats abound demonstrating just how different Mac Jones is, but there are also stats that indicate Jones could be more alike one former Patriot quarterback than anyone could imagine.

No, it isn’t Tom Brady (at least, not yet). Rather, it’s not her former Patriots quarterback Jones bares a striking resemble to: 2008 Matt Cassel.

Mac Jones isn’t the first quarterback to step in for Tom Brady in New England. Brady was lost in Week 1 of the 2008 season to an ACL injury, which meant backup Matt Cassel needed to fill his shoes.

Mind you, this was the Patriots offense a season after their historic 2007 run, so the shoes were mighty.

Cassel finished his first game completing 13 of 18 passes for 152 yards and a touchdown. A safe, conservative start that gave them 17 points and a win over Kansas City.

Looking at Jones’ current stats and projecting them over his next five games draws an eerily similar comparison to what Cassel did in 2008.

The similarities don’t end here. Mac Jones is 7-4 through 11 games, which is exactly where Cassel stood after Week 11 of 2008.

If the 16-game projection isn’t convincing enough, looking at the first 11 games of the season reveals that Cassel and Jones stood shoulder to shoulder stat-wise through these weeks.

In 2008, Cassel finished the season with 11-5, meaning that if Jones did the same from this point, he would go 4-1. With two games against the Bills and a Titans matchup, it’s unlikely the Patriots escape 2021 with just one more loss. A 17th game and a weakened AFC still allows the Pats to pave a path to the playoffs.

Besides the difference in experience, there’s one significant difference between Matt Cassel and Mac Jones: these two quarterbacks inherited entirely different teams.

Cassel stepped into an offense with the best wide receiver in recent history, Randy Moss, and the prototype for the NFL slot receiver, Wes Welker. The Patriots innovated the spread offense we see today, but in 2007 and 2008, NFL defenses catered more to the run than the pass, significantly benefiting Cassel.

Jones, on the other hand, stepped into an offense where Jakobi Meyers had replaced Julian Edelman alongside a decent Nelson Agholor and reliable tight ends Hunter Henry and Jonnu Not exactly the caliber of offense Cassel has in 2008.

The common thread here isn’t the quarterback, it’s the man pulling the strings. No better case could be made to argue Bill Belichick is the reason for the Patriots success than the one he’s laying out right in front of our eyes.

Twice Belichick has created an offense where the quarterback is the foreman and not the machine — an experiment that creates historically great offense when the foreman is Tom Brady and fails when it’s Cam Newton.

Mac Jones is putting up Matt Casssel numbers, but that’s not an insult. If anything, it’s a credit to Cassel, reason to pump the brakes on already putting Jones in Canton, and further confirmation that Belichick is the greatest NFL head coach of all-time.