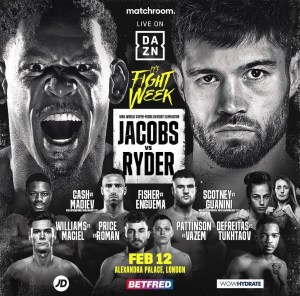 Daniel Jacobs and John Ryder will fight on Saturday for the World Boxing Association (WBA) super middleweight eliminator. The American and the British fighter will meet at the Alexandra Palace, London, England, for the Matchroom Boxing feature fight.

It will be a good fight between two contenders who are looking for a new title shot and need this victory to get it.

Both come into the fight having won two straight fights, after losing in WBA championship fights.

In Jacobs’ case, he defeated Julio Cesar Chavez Jr. in December 2019 and Gabriel Rosado in November 2020, two fights that came after falling to Saul “Canelo” Alvarez in May 2019 for the WBA world belt. The 35-year-old fighter has a little over a year without fighting  but is one of the top fighters in the division.

Ryder is last defeated Mike Guy in December 2020 and Josef Jurko in September 2021. He had previously lost to Callum Smith for the WBA title in November 2019. At 33 he wants another world title fight but must get past Jacobs to stay on that path.

Various promotional activities will take place this week and on Friday they will step on the scales to mark the division’s 168-pound. Jacobs has 37 wins, 3 setbacks and 30 knockouts, while Ryder has 30 wins, 5 losses and 17 knockouts.