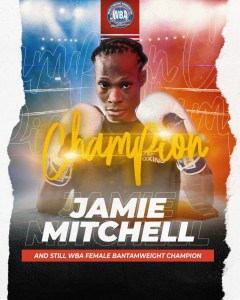 With an outstanding physical-technical performance, Mitchell, who is called “The Miracle”, used her boxing tools to win in four rounds the fight that reaffirmed her as the WBA World Champion at 118 pounds.

Skelly received the first right cross at the end of the first round, and the champion continued with a combination of punches in a flurry of seconds that ended with a precise left cross that led Skelly to sit on the canvas with the round closing bell.

In the second round, a string of straight punches put Skelly back in check and the referee gave her the protection count and then continued the fight. The third round also made the representative of Liverpool unstable, whom at 35 years old bravely had her first title shot against a voracious fighter like Mitchell.

The actions came to an end when in the fourth episode Mitchell put Skelly on the ropes with the one-two combination and repetitions of precise crosses. The referee stepped in and hugged Skelly to announce the knockout.

This is how Jamie Mitchell maintained her black and gold crown at 118 pounds and has a record of 8 wins with 5 KOs and 2 draws that keep her undefeated.