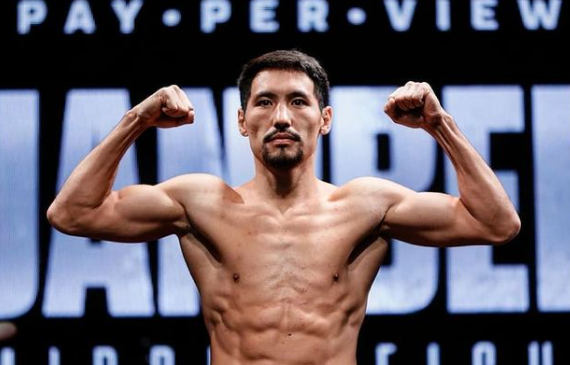 By and large, Jaime Munguia is viewed as a bonafide contender at 160 pounds. The Mexican product and former 154-pound belt holder made it look incredibly easy this past weekend, stopping journeymen D’Mitrius Ballard in his tracks in the third round.

Just a few days removed from said victory, Munguia has already been informed on who his next opponent will be. The WBO sanctioning body has formally ordered both Munguia and highly ranked contender, Janibek Alimkhanuly, to begin negotiations for an interim title fight.

Despite Munguia being a former titleholder and undefeated through 39 professional fights, Alimkhanuly views their likely clash as a walk in the park.

The 28-year-old wrecking machine from Kazakhstan has left body after middleweight body sprawled on the canvas as he makes his way up the 160-pound ladder. Most recently, Alimkhanuly punished former world champion Hassan N’Dam N’Jikam, en-route to an eighth-round stoppage win.

One fight prior, Alimkhanuly brutally stopped another former 160-pound titlist in Rob Brant. The victory for Alimkhanuly was somewhat prophetic. Considering how loudly he shouted beforehand, the powerful southpaw was unsurprised with how their showdown played out. With Munguia seemingly up next, Alimkhanuly wants to make it clear that the 25-year-old’s fate will follow a similar pattern.

“Guys, I don’t like jokes. If I said easy work, it will be easy work inshallah. I beat two former world champions. Before I beat them, I said that I will knock them out. And I did it. I know myself well.”

The overall picture at 160 pounds is a cloudy one. Current WBO titlist Demetrius Andrade, is in the process of negotiating an interim super middleweight title fight against Zach Parker. At the moment though, it’s unclear if Andrade will defend his 160-pound title against the winner of Alimkhanuly vs. Munguia, or opt to face bigger men at 168 pounds.

Regardless of what ultimately happens, whether it’s a date with Andrade, a showdown against Munguia, or a matchup against anyone up and down middleweight landscape, Alimkhanuly isn’t worried.

“I am very confident in myself. I’ll beat anyone.”