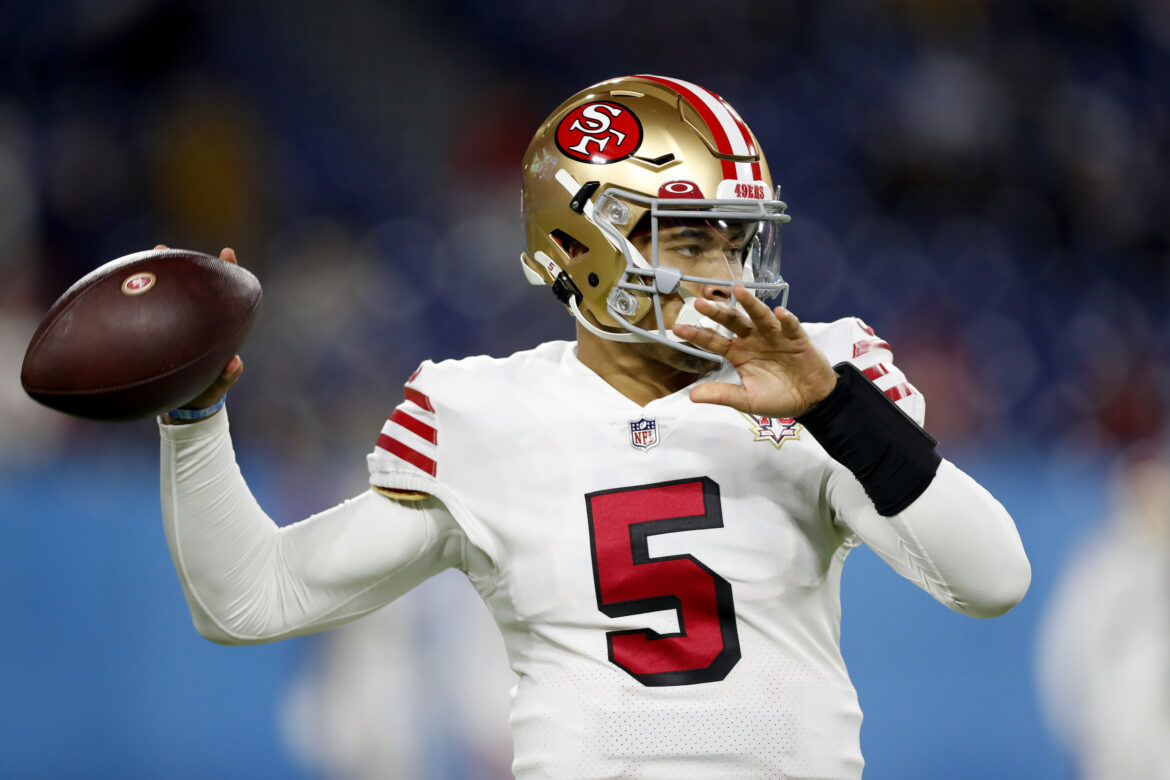 The quarterback vacancies are seemingly all filled just before training camp, but one name that remains with their team is Jimmy Garoppolo. Expected to be moved this offseason, Garoppolo is still with the San Francisco 49ers, after the team moved up to the No. 3 spot in the 2021 NFL Draft to select Trey Lance. Now, it is seemingly Lance’s time to shine with the 49ers as the starter.

Former 49ers great Jerry Rice has had high praise for Lance this offseason, and he continued to do so during an appearance on NFL Network’s NFL Total Access this week.

“The sky’s the limit for him, to be honest,” Rice said, h/t NFL.com. “I was shooting a commercial with him … and I was running routes for him. It didn’t take me long to be on the same page with him, he’s got that rocket arm, but he’s also got that mobility and that vision where he can extend plays and throw the ball downfield. So I’m sure with repetitions on the field, the players really just building around him, he’s going to have a successful year this year.”

While praising Lance, Rice said that the 49ers need to name the starter heading into the 2022 regular season, and not go back-and-forth between the second-year signal-caller and Garoppolo.

“I don’t know what the Niners are going to do with Jimmy G and Trey Lance. I know one thing: We don’t want that carousel of back-and-forth during the season,” Rice said h/t NFL.com.

Lance did get starting time last season after Garoppolo sat out due to injury. In his six appearances (two starts), Lance completed 57.7-percent of his passes for 603 yards, five touchdowns, and two interceptions.

Garoppolo started in all three of San Francisco’s playoff games, where they defeated the Dallas Cowboys in the Wild Card Round and the Green Bay Packers in the Divisional Round, and lost to the Los Angeles Rams in the NFC Championship Game.

This past March, Garoppolo underwent shoulder surgery. NFL Network’s Mike Garafolo said recently that Garoppolo’s shoulder is “healing as expected,” and that he is on schedule to throw at the start of 49ers training camp.

All eyes will be on the 49ers regarding their quarterback situation, specifically what they end up doing with Garoppolo. Do they keep him on the team for the final year of his contract? Or do they wait and see if a team suddenly becomes in need of a quarterback?

One thing is for certain, Rice is all-in on Lance being San Francisco’s starting signal-caller for the upcoming season.