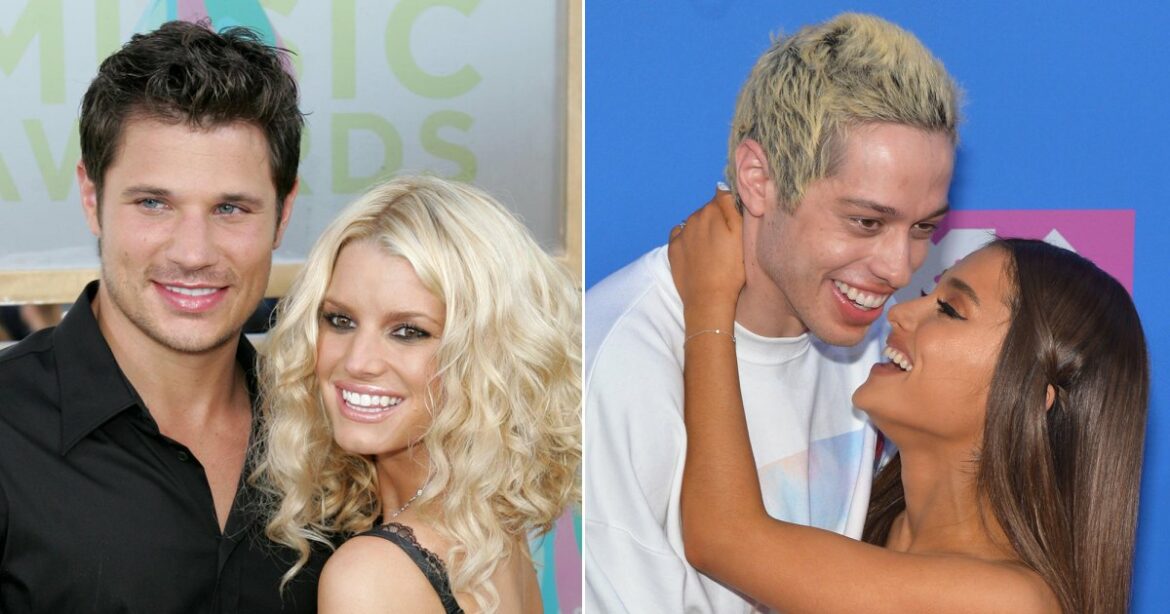 In the early 2000s, celebrity couples including Dave Navarro and Carmen Electra, Pamela Anderson and Kid Rock, and Nick Lachey and Jessica Simpson were the talk of the festivities.

After exchanging vows in 2002, Lachey and Simpson attended the awards show together for the next three years as they promoted their MTV series, Newlyweds. However, the 98 Degrees band member and the “I Wanna Love You Forever” songstress’ marriage ended when Simpson filed for divorce in December 2005. The paperwork was finalized in 2006.

More recently, Ariana Grande and Pete Davidson made their red carpet debut at the 2018 VMAs. The relationship milestone came nearly three months after Us Weekly broke the news of their whirlwind engagement, just weeks into their romance.

While the “God Is a Woman” singer and the Saturday Night Live star couldn’t keep their hands to themselves at the event, two months later, they called it quits.

“They realized it happened too quick and too early,” an insider told Us in October 2018.

Davidson wished his former flame the best one year later, telling Paper magazine, “I don’t ever make public statements about relationships ‘cause I just don’t think it’s right, you now? I usually express how I feel about anything through work. … I hope she’s well. I hope she’s very happy. And that’s pretty much it.”

The 2018 VMAs also showed Jennifer Lopez and Alex Rodriguez packing on the PDA shortly before the former professional baseball player popped the question in March 2019.

“We just support each other. It’s just how we do it,” Lopez told Us of their relationship one month before the proposal.

Eventually, the power couple hit a snag in their relationship and they ended their two-year engagement in April 2021.

“We have realized we are better as friends and look forward to remaining so,” the now-exes told Today in a statement at the time. “We will continue to work together and support each other on our shared businesses and projects. We wish the best for each other and one another’s children. Out of respect for them, the only other comment we have to say is thank you to everyone who has sent kind words and support.”

Scroll through to revisit the classic PDA moments: