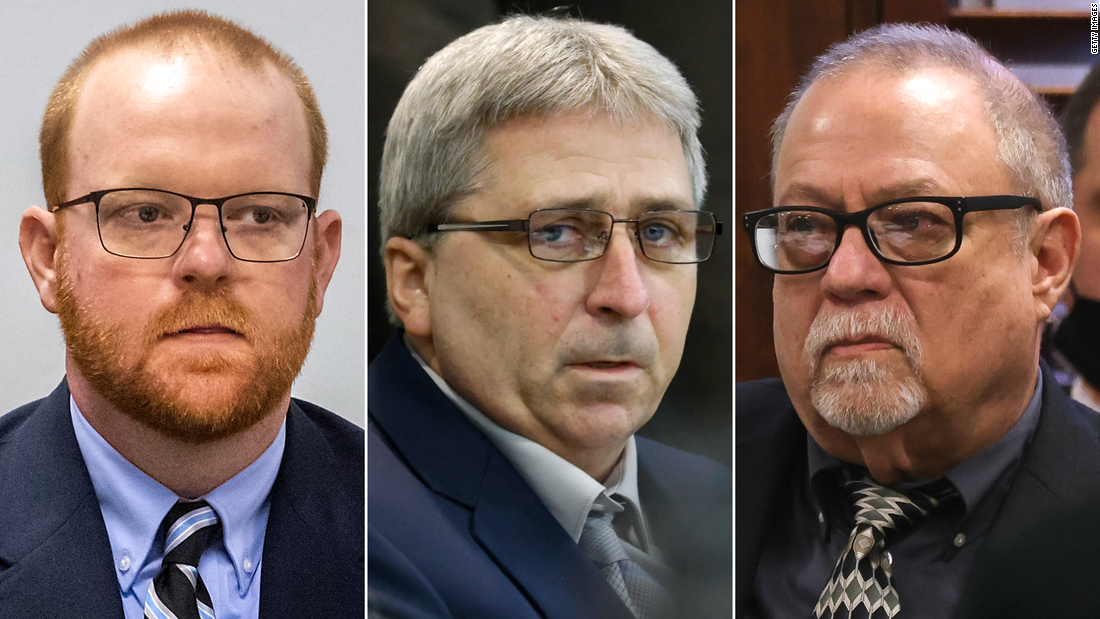 “This wasn’t about trespassing. This wasn’t about neighborhood crimes, either. … It was about race — racial assumptions, racial resentment, and racial anger,” Justice Department civil rights division counsel Christopher J. Perras told a jury in court Monday morning in Brunswick, Georgia.

Defendants Travis McMichael, his father Gregory McMichael, and their neighbor William “Roddie” Bryan knew only this for certain when they saw Arbery running in their neighborhood in February 2020 outside Brunswick — that Arbery “was a Black man running down a public street,” Perras said.

“(The McMichaels didn’t pursue) because they were concerned about trespassing, unless something extra was motivating them. … (It was) pent-up racial anger,” Perras said.

The McMichaels and Bryan were convicted in a state court in November of felony murder and other charges for the killing of Arbery, a Black man, after they chased him in a neighborhood outside Brunswick.

The three men are each charged with interference with rights — a hate crime — and attempted kidnapping. The McMichaels also face charges related to the use of firearms during a violent crime.

Defense attorneys rejected arguments that their clients acted because of race.

Bryan, who joined the pursuit in his own truck after seeing the McMichaels follow a running Arbery in their pickup, and who recorded video of the shooting, would have done so regardless of skin color, Bryan’s attorney, Pete Theodocion, said.

“This (Bryan’s pursuit) would have happened regardless of (Arbery’s) race,” the attorney said.

Amy Copeland, a defense attorney for Travis McMichael, said in her closing statement there is no evidence her client used a racial slur on the day Arbery was murdered, no evidence he was part of a hate group, no evidence of racial violence committed by McMichael and no evidence that he talked about Arbery’s death in racial terms.

The defense attorney for Greg McMichael told the jury that his client had tenants who were people of color.

The defendants, who pleaded not guilty in this trial, are already serving life sentences in prison for the murder convictions, though Bryan is eligible for parole after serving 30 years. Convictions in this trial could bring steep fines and more life sentences. Federal prosecutors and Arbery’s family have said he was out for a jog when he was killed. Defense attorneys in both trials contended the McMichaels, suspecting Arbery of trespassing multiple times at an under-construction home, pursued him through neighborhood streets to stop him for police. Travis McMichael argued he shot Arbery in self-defense as they wrestled over McMichael’s shotgun.

Arbery’s mother, Wanda Cooper-Jones, broke down in the courtroom Monday, when Balbo detailed the moments leading up to the fatal attack.

“He described Ahmaud as turning toward Travis and attacking Travis, which we all know now that wasn’t true,” she told reporters outside the courthouse. “When Ahmaud turned to Travis, Travis already had that shotgun pulled toward him.”

Prosecutors at both trials conceded Arbery was at the construction site several times including the day of the shooting, but always without breaking in or taking anything, and never doing anything that would allow the men to pursue or stop him. They argued that White people visited the site apparently without being chased, and that the pursuers did not actually see Arbery at the site that day and had no knowledge he’d committed a crime. Monday’s closing arguments came after four days of testimony from 21 witnesses — only one of which was for the defense.

Perras contrasted the defendants’ actions to others in the neighborhood, including a neighbor who, instead of chasing Arbery, simply called a nonemergency police line after seeing him at the construction site.

That was vigilance, whereas the defendants were vigilantes, Perras said.

Arguing the McMichaels acted out of racial resentment, Perras pointed to testimony about the way they talked about African Americans.

Perras brought up a witness who testified that Gregory McMichael, after she brought up the death of a civil rights leader, said in 2015, “All these Blacks are nothing but trouble; I wish they’d all die,” before going on a longer rant about Black people. The prosecutor also pointed to Travis McMichael’s use of social media. Testimony had included that Travis McMichael commented under a Facebook video appearing to show a group of primarily Black teenagers beating a White teen, referring to them as “monkeys,” and writing: “I say shoot them all.”

There was no evidence any such person had taken McMichael’s gun, and he ignored evidence that a White person had allegedly stolen a gun from a vehicle down the street weeks beforehand, Perras said.

Travis McMichael’s attorney argued that the jury can’t use his racist comments “to judge his character. The case isn’t to punish belief even if you think they’re wrong. But you can use these messages … to determine if Mr. McMichael acted with the motive and intent required of this particular element,” Copeland said.

Perras also pointed to evidence that Bryan posted racial slurs, and disapproved of his daughter’s relationship with a Black man. Perras argued Bryan’s pursuit of Arbery — after seeing Arbery running from the McMichaels’ truck — was based on race, citing testimony that Bryan didn’t know precisely what was happening or asked what the pursuit was about.

“He didn’t ask Ahmaud, ‘Are you OK.’ … (He assumed) the Black man was in the wrong and the White guys were in the right. … That’s how hard-wired his racial assumptions were,” Perras said.

Theodocion, Bryan’s attorney, countered Monday that Arbery never asked for help. What Bryan saw was two people — in a truck he recognized from the neighborhood — asking Arbery to stop, and Arbery wasn’t stopping.

“It was entirely reasonable” to assume the person being chased did something wrong, Theodocion said. Bryan “absolutely” had “enough evidence” to follow in his own vehicle at a slow speed and record video, the lawyer said.

Addressing Bryan’s messages, he said that while the slurs were “nothing to be proud of” and his disapproval of his daughter’s relationship may be unfortunate and ignorant, there’s nothing showing he was obsessed with race or that it was a factor in the pursuit.

“The point in this trial is not whether he has opinions we don’t approve of. … He was not shown through this evidence to have a hatred of African Americans (or) a want of violence,” toward them, Theodocion said.

The jury is made up of eight White jurors, three Black jurors and one Hispanic juror, according to details provided in court. Three White people and one Pacific Islander have also been selected as alternates.

The defense argued at the state murder trial that the pursuit began when the elder McMichael saw Arbery running from the direction of the under-construction home, and that he believed he matched the description of someone who had been recorded there previously — and of someone Travis McMichael had encountered and called police about 12 nights earlier. Unbeknown to the McMichaels on the day of the shooting, a neighbor had just called police to report that Arbery was at the construction site alone, and that Arbery ran as the neighbor called, according to testimony.

The prosecution in the murder trial conceded surveillance videos did show Arbery at the construction site multiple times, including the day he was killed, but said that he never broke in or took anything.

Perras on Monday argued the defendants, after Arbery’s killing, falsely told police Arbery had been caught breaking into houses. That was part of a pattern, Perras said, showing the defendants knew what they had done wrong and were trying to get away with it.

What a former US attorney says the prosecution has to show

It isn’t clear whether evidence of the defendants making racist comments prior to Arbery’s killing will be sufficient to meet the prosecution’s burden in a hate crime case, former US Attorney for the Middle District of Georgia Michael Moore told CNN before the trial began.

Though the men’s texts and social media posts contain “very unsavory and just disgusting commentary,” he said, that alone will not suffice.

“They’ve got to go in and say, ‘We have this evidence of racial bias and race-related motivation, and that is one of the reasons that (Arbery) was killed,’” the former federal prosecutor said. “The question is: Does the fact that somebody may be a racist — can you say that is what led to this killing? And I think that’s a tougher burden on the government.”

At the same time, the evidence of past racial slurs provides context for the alleged crimes, Moore said. That may be ample to secure a conviction, he said, because “race doesn’t have to be the sole motivator in a hate crimes case.”

Arbery’s mother pointed out that the second anniversary of his death will be Wednesday.

“Hopefully we’ll have a good verdict by the 23rd,” Cooper-Jones said.