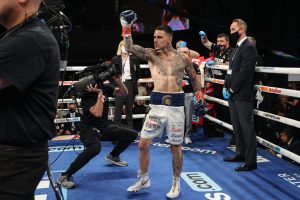 The pioneer organization published its ranking lists corresponding to the month of November and with them the awards for that period, in which Saúl Álvarez was awarded as Boxer of the Month.

Against all odds, the Australian of Greek descent dominated Teofimo and stripped him of the Super Lightweight Championship of the oldest boxing body in the world, which came with the WBC, WBO and IBF belts.

Kambosos imposed his authority from the very first round when he knocked down Lopez with a right hand to the face. That helped him gain confidence and improve as the rounds went on.

The 28-year-old fighter took advantage and although he found himself in trouble in the last part of the fight, he was able to win by split decision. He got up from a knockdown in the tenth and showed that he knows how to deal with pressure at key moments.

The WBA congratulates Kambosos for this great victory and looks forward to his return to the ring to give another great fight to the boxing fans.