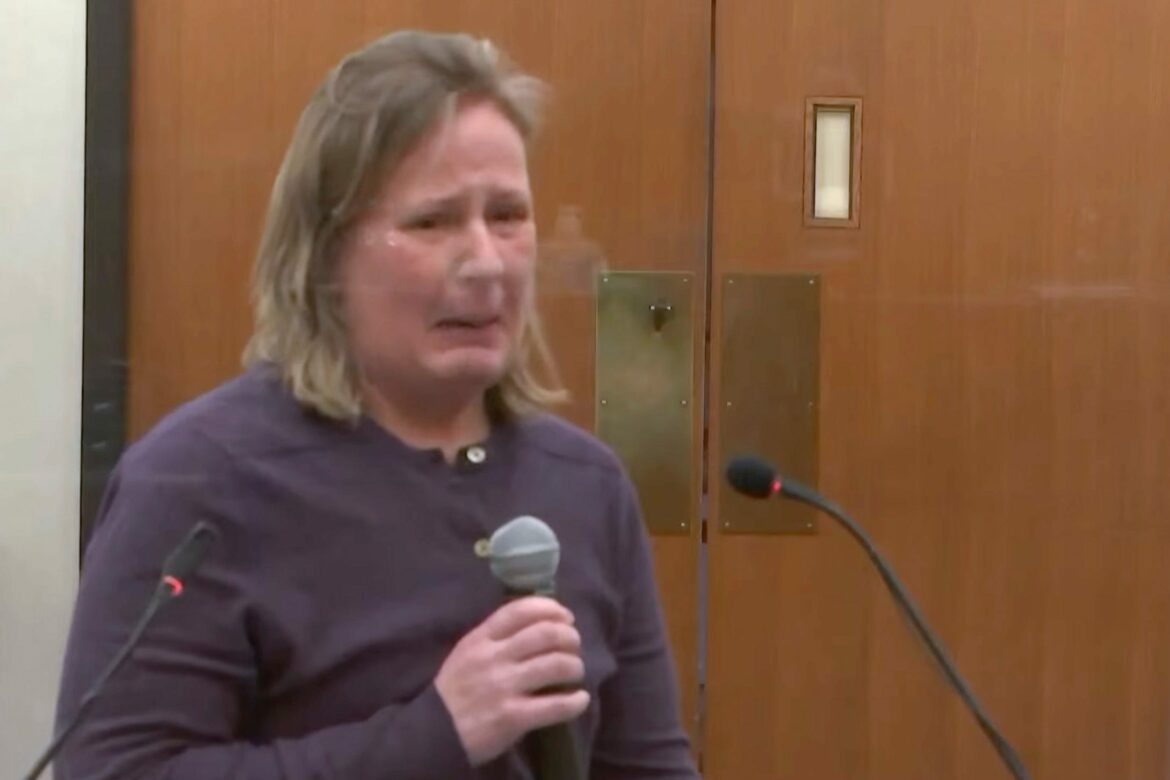 The former Minnesota police officer who fatally shot Daunte Wright while yelling “Taser” during a traffic-stop-turned-arrest outside Minneapolis was sentenced Friday to two years in prison.

The first-degree manslaughter charge carried a maximum sentence of 15 years in prison and/or a $30,000 fine and a presumptive sentence of six to eight-and-a-half years. But Hennepin County District Court Judge Regina Chu opted to give Potter a lighter sentence than recommended by state sentencing guidelines.

Katie Wright, Daunte Wright’s mother, said the family was “very disappointed” in the ruling. “Today, the justice system murdered him all over again,” Wright said. “This isn’t okay. This is the problem with our justice system today. White women tears trumps justice.”

“We actually thought we was gonna get a little justice,” he said.

Attorney Ben Crump said Wright “did not get the consideration that he deserved.”

“We saw Derek Chauvin get convicted. We saw Kim Potter get convicted. So I think we all allowed ourself to believe for a moment that there could be an equal justice system,” Crump said. “When we have sentences like this, it makes it difficult to make those arguments.” 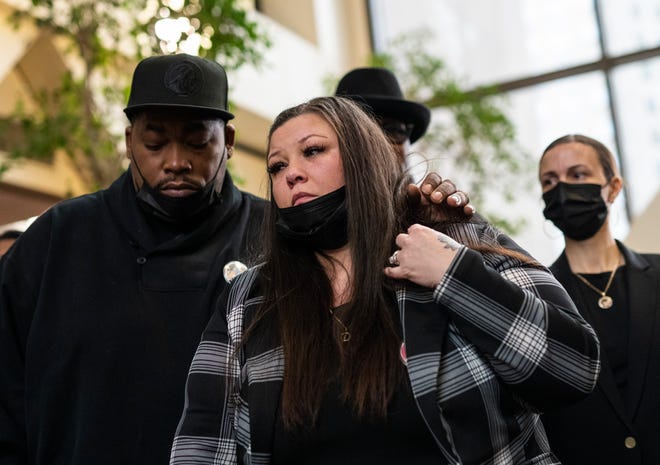 In her ruling, Chu said “there will be those who disagree” with the sentence. She called on people to “try to empathize” with Potter.

“This is a cop who made a tragic mistake. She drew her firearm thinking it was a Taser and ended up killing a young man,” Chu said, adding, “She never intended to hurt anyone. Her conduct cries out for a sentence significantly below the guidelines.”

Chu, choking up, said the sentencing was “an extremely difficult decision.” She called the case “highly unusual” and “one of the saddest cases I’ve had on my 20 years on the bench.” Chu said she received “hundreds of hundreds” of letters on Potter’s behalf that “paint a portrait of a woman who touched a lot of people in a good way.”

Prosecutors had argued there were aggravating factors in the case that merited harsher sentencing. They said Potter’s actions endangered other people and that she abused her position of authority as a police officer. But Chu said the state did not prove the aggravating factors.

‘SHE DID COMMIT A CRIME’:Juror says Kim Potter made a mistake but was still responsible

Family members of Wright, who was 20 years old, spoke before Chu’s ruling. “I will never be able to forgive you for what you’ve stolen from us,” Katie Wright said before the court as she cried. “My life and my world will never, ever, be the same.”

Wright’s mother said Potter “failed Daunte, our family and our community.” She noted Potter did not render aid to her son, whose car was held at gunpoint for more than five minutes as he bled out. “She didn’t try to save him. You should have done better,” Wright said.

Arbuey Wright said his son was “every man’s dream.”

“I would watch Daunte as he slept for many years, thinking, wondering, how his future would be – what he would become,” he said, adding, “All we have is memories left of our son.”

Two of Wright’s siblings and Chyna Whitaker, the mother of Wright’s 2-year-old son, Daunte Jr., also spoke. “Kim Potter took my son’s best friend away from him,” Whitaker said. “I am now a single mother, not by choice but by force.” 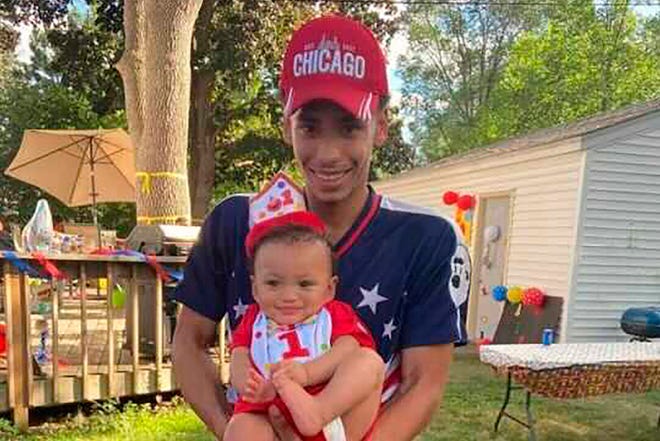 Potter, who had been with the police department for 26 years, faced Wright’s family as she spoke Friday. “I am so sorry that I brought the death of your son,” Potter said, adding, “Katie, I understand a mother’s love, and I am sorry I broke your heart. My heart is broken for all of you.”

Defense attorneys filed a motion late last month asking the court to sentence Potter to probation instead of prison, based on her “exemplary career,” “crime-free life” and “evident contrition.” They also argued Wright is to blame for creating a situation where Potter needed to use force and said Potter “will be a walking target in prison.”

“This is beyond tragic for everyone involved,” defense attorney Paul Engh told the court Friday.

Engh said Potter “has enormous community support” and has received “thousands” of cards from supporters while in prison. He held up a cardboard box full of cards and a stack of letters submitted on Potter’s behalf and read from several of them, including some from Potter’s family. 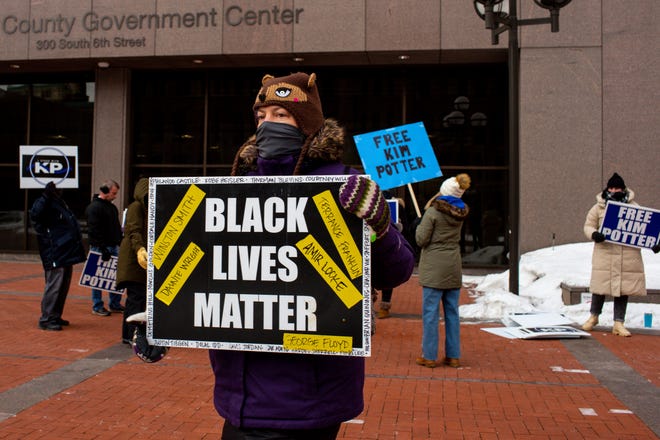 Potter, who is white, fatally shot Wright, a Black man, on April 11. She and a trainee officer said they pulled Wright’s vehicle over that day because he had a blinker on in the wrong turn lane, expired tabs and an air freshener hanging from his rearview mirror.

The officers discovered Wright had a warrant for arrest on a weapons violation and an order of protection against him, and they attempted to detain him. During the struggle, Potter shot Wright, who drove down the street and crashed into an oncoming vehicle, injuring the passenger in his car as well as two others.

At trial, defense attorneys argued Potter mistook her firearm for a Taser but was justified in using deadly force to prevent another officer from being injured. Potter testified at the trial and said she was “sorry” and “didn’t want to hurt anybody.”

Prosecutors said Potter recklessly handled her firearm and caused Wright’s death through her “culpable negligence” – a conscious and disregard of a substantial and unjustifiable risk.

Potter has been in state prison since the conviction nearly two months ago. A predominantly white jury deliberated for more than 27 hours in the case.

One juror who spoke anonymously to KARE-TV following the verdict said: “We felt like she was a good person, we felt she made a mistake, and that a mistake does not absolve you from the fact she did commit a crime.”

Potter has been segregated from the rest of the prison population and hasn’t had contact with other incarcerated women, said Sarah Fitzgerald, spokesperson for the Minnesota Department of Corrections. 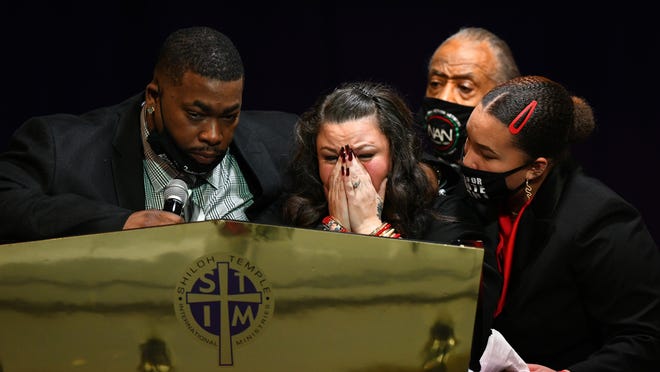