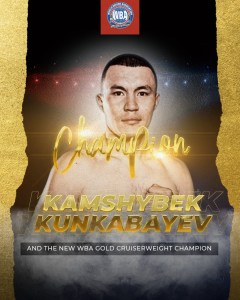 Kamshybek Kunkabayev defeated Steven Ward by technical decision this Saturday in Kazakhstan, and won the Gold belt of the World Boxing Association (WBA) at Cruiserweight.

A cut on Ward’s face did not allow him to continue into the seventh round and the victory was granted the home fighter, who kept his undefeated record.

The referee determined that the impact was accidental and for that reason the victory was decreed in favor of Kunkabayev, who continues in his vertiginous rise in world boxing.

The Kazakh remains undefeated in four bouts, while this was Ward’s second career loss, who has won 13 fights.