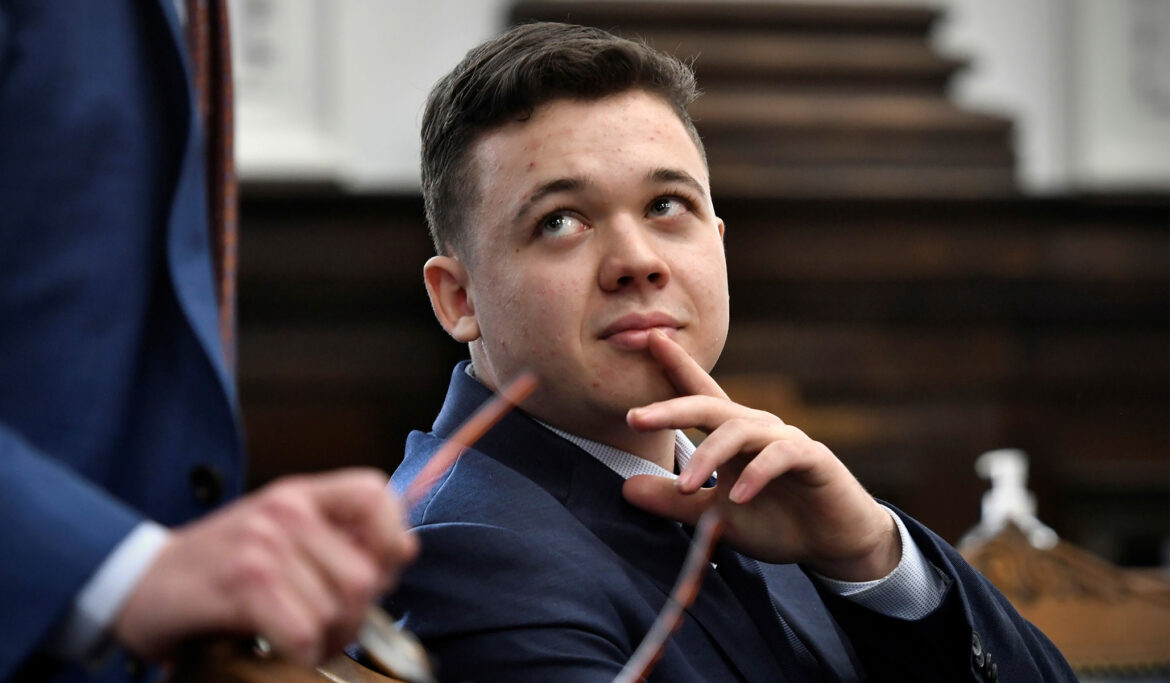 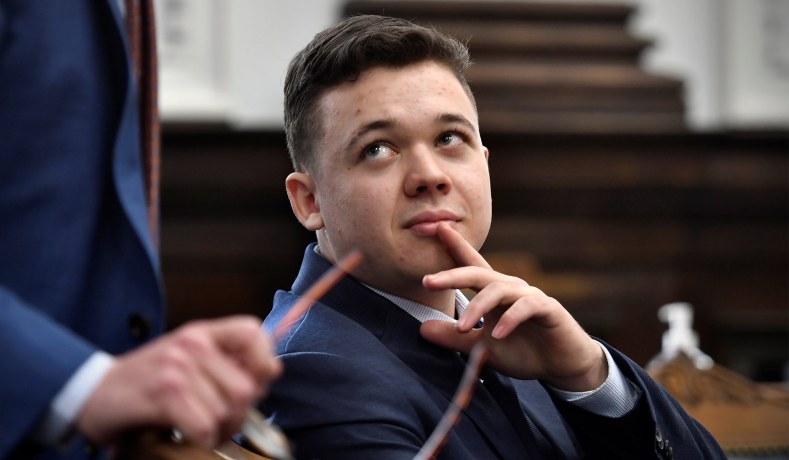 Kyle Rittenhouse waits for his trial to begin for the day at the Kenosha County Courthouse in Kenosha, Wis., November 10, 2021. (Sean Krajacic/Pool via Reuters)

Kyle Rittenhouse was found not guilty on all charges after after shooting three people, killing two, during the riots in Kenosha, Wis., last August.

As the verdict was announced, Rittenhouse, overwhelmed with emotion, burst into tears and dropped to the ground, struggling to breathe. After collecting himself, he embraced the defense counsel who represented him throughout the trial.

Kyle Rittenhouse’s reaction to the not guilty verdict: pic.twitter.com/1sW2QPPFPb

Rittenhouse was arrested on August 26, 2020, after shooting three people during the riots that followed the police killing of Jacob Blake, a black man who was brandishing a knife and in the process of violating a restraining order when police arrived on scene. He was initially indicted on charges of first-degree intentional homicide, first-degree reckless homicide, attempted first-degree intentional reckless homicide, failure to comply with an emergency order from a local government, and possession of a dangerous weapon.

Blake’s shooting occurred months after the killing of George Floyd in Minneapolis, which sparked massive protests and rioting in cities nationwide. Rioters looted and burned multiple businesses to the ground in Kenosha following the Blake shooting, with many rioters traveling in from outside Wisconsin.

The prosecution in his trial sought to portray Rittenhouse as a “wannabe soldier” who went to Kenosha looking for an opportunity to use violence, while the defense argued that he came to Kenosha to protect property and acted in self-defense after being attacked by the three men he ultimately shot.

Rittenhouse testified that Joseph Rosenbaum, the first man he shot and killed, chased him while a bystander shouted “get him and kill him.” According to Rittenhouse, Rosenbaum grabbed the barrel of his gun, at which point Rittenhouse shot him four times.

Gaige Grosskreutz, who was shot in the arm by Rittenhouse but survived, revealed under cross-examination that he pointed his own gun at Rittenhouse before he fired.

Judge Bruce Schroeder dismissed the misdemeanor weapon charge, which held that Rittenhouse was too young to be carrying an AR-15, on Monday before the court heard closing arguments. Schroeder commented earlier in the trial that the law on which the misdemeanor charge relied was too vague for an “ordinary citizen” to understand.

“I have been wrestling with this statute with, I’d hate to count the hours I’ve put into it, I’m still trying to figure out what it says, what’s prohibited. I have a legal education,” Schroeder said.

Schroeder also berated Assistant District Attorney Thomas Binger on November 10, after Binger apparently implied that Rittenhouse’s silence on the charges against him prior to the trial could be incriminating.

“This is a grave constitutional violation for you to talk about the defendant’s silence, you’re right on the border line, you may be over. It better stop…This is not permitted,” Schroeder said.

Wisconsin Governor Tony Evers deployed roughly 500 National Guardsmen to Kenosha in the event that the verdict results in rioting.