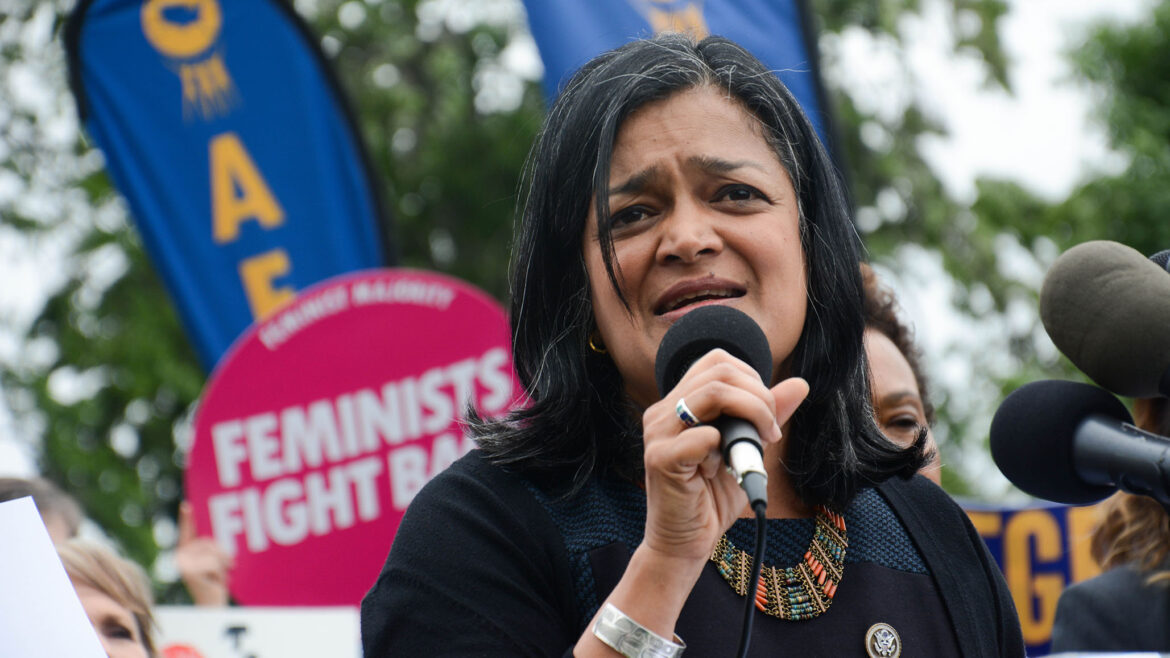 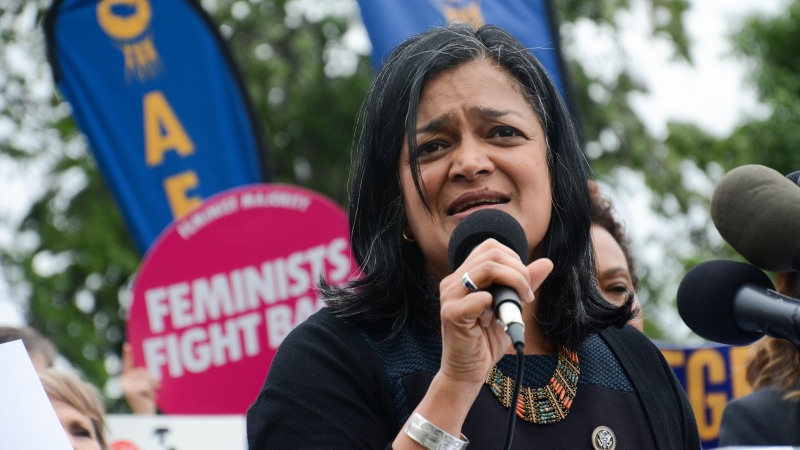 Pramila Jayapal on the grounds of the Capitol to voices concerns about the President’s proposed budget. Washington, 24 May 2017.
(AFGE/Wikimedia)

Representative Pramila Jayapal (D., Wash.), chair of the progressive caucus, said Sunday that she will not support Democrats’ massive social-spending package if it includes the Hyde Amendment, a stipulation that prohibits taxpayer money from funding abortions.

Jayapal’s comments came during an appearance on CNN’s State of the Union days after Senator Joe Manchin (D., W. Va.) told National Review that the bill would be “dead on arrival” if the Hyde Amendment were not included.

“Yeah, we’re not taking the Hyde Amendment off. Hyde’s going to be on,” he said Wednesday.

On Sunday, CNN anchor Dana Bash noted that Jayapal had shared her experience with abortion in congressional testimony last week. She asked the congresswoman if she would be able to vote for a bill that has the Hyde Amendment included.

“So what happens?” Bash asked.

Jayapal responded that “this is a negotiation” and then claimed that the Hyde Amendment is a measure that “the majority of the country does not support,” despite the fact that a January 2021 Marist Poll showed that 58 percent of Americans oppose taxpayer funding of abortion, while 38 support it. The poll’s results were largely consistent with polling on the Hyde amendment in recent years.

She added that one-in-four American women have had an abortion and are in need of reproductive care during a time “when those protections are being rolled back.”

“That is nobody’s business,” Jayapal said. “It is our business as people that carry the babies. And we have to be able to make the choices during our pregnancy.” Bash then questioned whether Jayapal was suggesting federal money should be spent on abortion in the spending package.

“No. None of the dollars here are going for that,” the congresswoman said. Jayapal added that she thinks Manchin is asking for “something more than” just the Hyde Amendment.

Meanwhile, the Washington state Democrat said a $1.5 trillion figure for Democrats’ reconciliation bill that Manchin had offered as his topline is “not going to happen” because it is “too small to get our priorities in.”

“It’s going to be somewhere between 1.5 and 3.5, and I think the White House is working on that right now because, remember, what we want to deliver is childcare, paid leave and climate change, housing,” Jayapal said.

Manchin and Senator Kyrsten Sinema (D., Ariz.), both of whom are moderates, have refused to support the bill’s suggested $3.5 trillion price tag. The bill would need the support of all 50 Senate Democrats to pass via the budget reconciliation process.

The congresswoman’s comments come after the House delayed a vote on the $1 trillion bipartisan infrastructure bill on Thursday, as progressive Democrats refused to support the bill until Congress acts on the reconciliation package.

House speaker Nancy Pelosi (D., Calif.) said Friday that Democrats need more time to pass both measures. “While great progress has been made in the negotiations to develop a House, Senate and White House agreement on the Build Back Better Act, more time is needed to complete the task,” Pelosi wrote in a Dear Colleague letter on Friday evening.