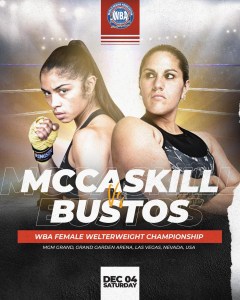 The undisputed welterweight champion, American Jessica McCaskill, will return to the ring to fight against veteran Victoria Bustos this Saturday at the MGM Grand in Las Vegas.

“Caskilla” will put her World Boxing Association (WBA) crown on the line, in addition to her WBC, IBF and WBO versions. The bout will be on the undercard of the event that will feature Devin Haney vs. Joseph Diaz in the main event.

It will be the second defense for the 37-year-old American, who shocked the world in August 2020 when she defeated legend Cecilia Braekhus and won the crowns. The immediate rematch came in March of this year and McCaskill repeated the dose against the Norwegian to confirm that she is the best fighter in the category.

Now she will face Bustos, who has been in great battles and has faced several of the greats in recent years. The Argentinean comes with three wins in a row and with an important record in which she has faced fighters like Braekhus and Katie Taylor.

The weigh-in ceremony will take place on Friday and on Saturday they will step into the ring in the boxing mecca. McCaskill comes in with a record of 10 wins, 2 losses and 3 knockouts, while Bustos has 22 wins and 6 losses.