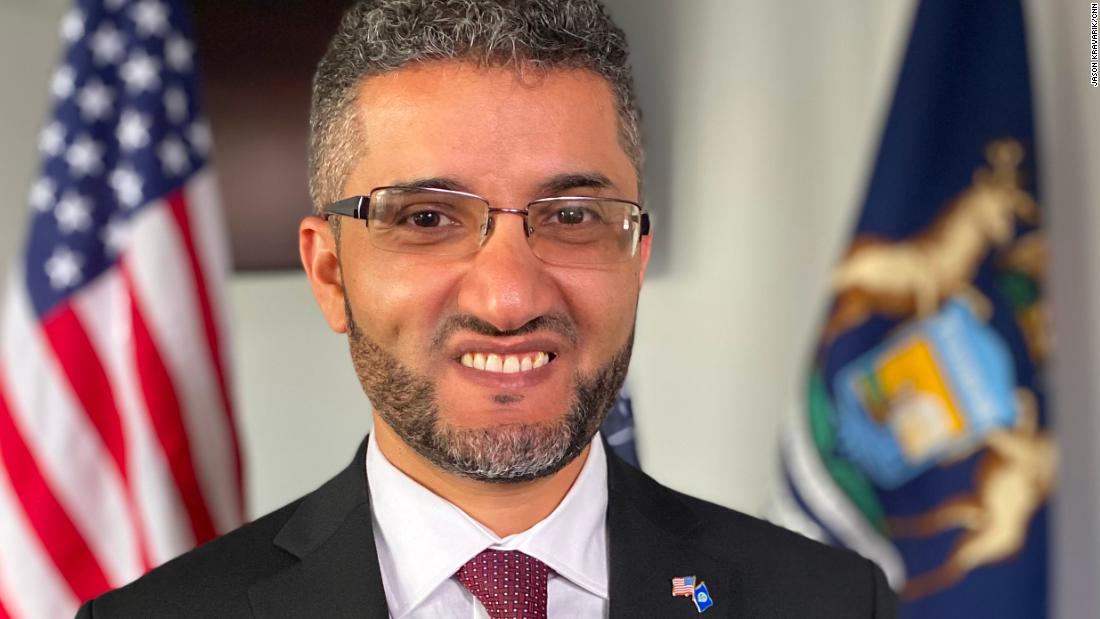 The Polish Cardinal Karol Wojtyla visited once, back in 1969, before he became Pope. A statue of Wojtyla, arms outstretched, still casts a shadow over what’s now called Pope Park, where a huge mural of Polish folk dancers stretches almost an entire city block.

Mayor-elect Ghalib was born in Yemen and came to the United States alone as a young man, with a smattering of broken English and little else. He’s now 42, works in the medical field and is studying to become a doctor.

Hamtramck’s heyday had apparently passed. The city was decaying. Many factories had closed. Many second and third-generation Polish Americans had moved to the Detroit suburbs and beyond in the past two decades. Immigrants, largely from Yemen and Bangladesh, took their place and Hamtramck, locals say, is now majority Muslim.

Hamtramck is a palimpsest — where new immigrants have laid layers of culture and society on top of what was already there. You can enjoy a sizzling Yemeni foul — a spicy bean stew — and flatbread for breakfast, and still find a kielbasa or a pierogi for lunch. And Hamtramck is now back on the rise, one of the fastest growing cities in Michigan, census figures show. The new immigrants are fixing up dilapidated houses, opening stores and restaurants, putting down roots. And what could be more American than diving into local politics?

“Tonight is a real example that the American Dream is alive and well in the land of opportunity,” Ghalib told the excitable crowd, gathered to celebrate his landslide victory in the early-November election. He defeated the incumbent, Karen Majewski, who had held the post for 16 years.

There is just one American-born member on the new council: Amanda Jaczkowski, a lifelong Michigander. Her Polish American family has worshiped for five generations at the same nearby Catholic Church. She converted to Islam in 2012.

That view was echoed by the mayor-elect.

“We are Muslims,” Ghalib said, sitting in the council chamber at city hall where he will soon preside. “We are proud of our beliefs and values. But we are not going to try and impose them on others.”

The mayor-elect and his council promise a separation of mosque and state. That’s the law, they say, and also their intent.

“I think it’s gonna be good!” Mara Popovska told us as she washed an elderly customer’s hair at the salon she’s run for decades on the main drag in town. But Popovska’s husband wants to up and leave. “He doesn’t have his own friends anymore,” she told us. “So, he doesn’t want to stay.”

The percentage of Polish Americans in Hamtramck has now dwindled into the single digits.

“Who’s got friends anymore?” her customer, Theresa Smith, exclaimed. “Mine are all dead!” Smith, a Polish American, was born in Hamtramck, has lived in the same house all of her 85 years, and says she plans to die here.

“There’s change all your life and you gotta go with it,” said Smith as Popovska pinned her shock of wet, white hair. “I mean, everybody might have a complaint of something or other. We’re human.”

Popovska complains her new neighbors aren’t as neat as she’d like. “I clean every day, they just throw!” she said. But as a business owner, she agrees Main Street is livelier since new immigrants moved in.

Smith says she welcomes the changing faces of her city. “They came into the city. They are fixing up the homes beautifully,” she told us. “When somebody says something against them, I get angry. Because all of our parents came from someplace at one time.”

When Muslim immigrants first arrived in Hamtramck in large numbers a decade or two ago, some locals didn’t like the call to prayer, playing from loudspeakers from the roofs of the mosques.

The goal, says Jaczkowski, is to make Hamtramck welcoming and safe for all. There are no plans, for example, for the council to make all women cover their hair around town, she volunteered. “There’s no reason for it!” she said.

But there was some disquiet when not a single Yemeni American woman attended Ghalib’s victory celebration late on election night.

“My campaign had six girls working in it, six females,” he said. But none of them were there.

“The result was announced late at night, you know, around 10 or 11,” he explained. “And part of culture, females don’t go out at night mostly. And, you know, there is still some segregation at events even when they attend.”

Jaczkowski was there that night. “One of the things that people need to understand is that Yemeni women here do not need saving,” she said. “I messaged a bunch of my friends and said, ‘Do you wanna be there?’ And they’re like, ‘No, we don’t want to be there.’”

Another potential point of friction between Middle Eastern culture and modern America came this past summer when Hamtramck’s Arts and Culture Commission proposed flying a gay pride flag outside City Hall.

“I am not with or against. I am with everyone’s right to practice what they want. But they shouldn’t make it a government issue,” Ghalib told us. “They can do it anywhere else they want, in their houses, in the street. I’m not against that. It doesn’t bother me.”

Ghalib does not want the issue brought before the council again. “It shouldn’t be discussed because it will be divisive, it will increase the division in the community,” he said, before conceding he never wants to be forced to vote on the issue. It is worth noting the US military does not allow the pride flag to fly on military bases. And the City Council of Roseville, California, voted this summer not to fly the pride flag or other non-governmental flags at their city hall. And there appear to be no Muslims on the council in Roseville.

Lynn Blasey of Hamtramck’s Arts and Culture Commission supported flying the flag. She ran for city council in the fall and lost. “We decided we wanted to do a little bit more for pride besides just read a declaration at the beginning of the month in the City Council meeting,” she told us. “Our goal was to let the LGBT community here in Hamtramck know that they’re not alone and there are services available to support them.”

Blasey said despite her defeat, she will continue to work with the council, with the candidates who beat her, for the good of the community. “I think that was an important message to send to the community,” she says. “Politics don’t have to be cutthroat.”

Mayor-elect Ghalib knows the national spotlight on Hamtramck’s all-Muslim city council will make his job more difficult. He’s trying to block it out.

“People are like, ‘What do you think about this being a first?’” said council member Jaczkowski. “I’m like, ‘Firsts are great. And now we have to prove it doesn’t matter.’”