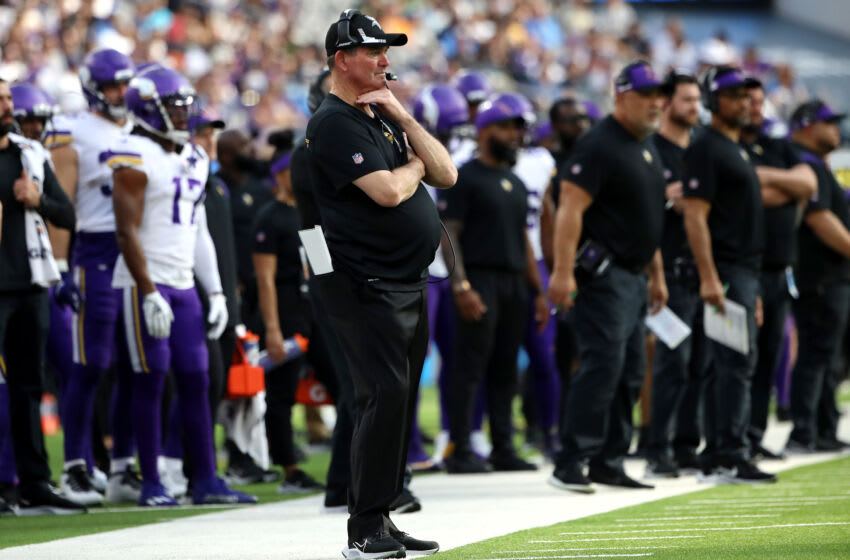 INGLEWOOD, CALIFORNIA – NOVEMBER 14: Head coach Mike Zimmer of the Minnesota Vikings looks on during the second quarter against the Los Angeles Chargers at SoFi Stadium on November 14, 2021 in Inglewood, California. (Photo by Katelyn Mulcahy/Getty Images)

The Bears should fire Matt Nagy after that mess vs. Ravens by John Buhler

The Minnesota Vikings managed to pull out an unlikely win at home against the Green Bay Packers. That should save Mike Zimmer’s job for a little while.

What will the future hold for Mike Zimmer and the Minnesota Vikings? Well, we’ll see, because Zimmer almost certainly saved his job (for at least little while longer) with the incredibly unlikely Vikings win over the Green Bay Packers Sunday afternoon.

The Vikings didn’t exactly look like the best team in the NFL against the Packers, but they did make Green Bay (one of the actual best teams in the NFL this season) look pretty mediocre in Minnesota.

Vikings quarterback Kirk Cousins was able to efficiently move through Green Bay’s defense and his success will help keep his coach around.

Vikings fans should still be critical of Zimmer for the way his teams have underachieved and struggled to find consistent success throughout his career.

This win won’t exactly end Zimmer’s time on the hot seat this season, but it will likely buy him some more time and give him an opportunity to prove that he belongs as the head coach in Minnesota for the foreseeable future.

It’ll be intriguing to see how that unfolds. If the Vikings are able to go on a run this season, maybe Zimmer will actually save his job for good.