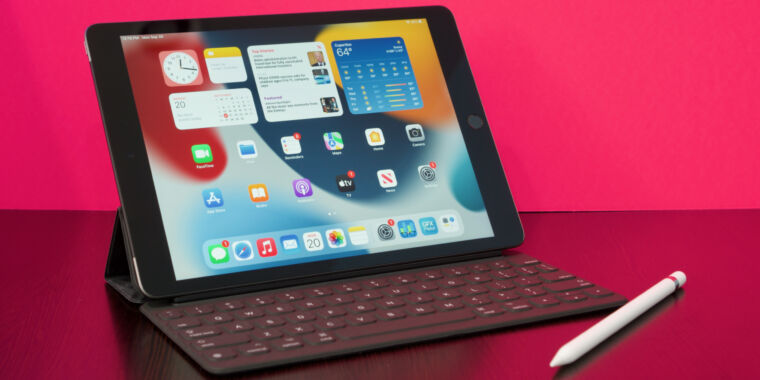 The new 9th-generation iPad looks just like the last one (and also the one before that).

The 10.2-inch screen is smaller than the iPad Air 4’s 10.9-inch screen, even though the Air is a shade smaller overall.

This is the first-gen Apple Pencil, with all its foibles.

The Smart Keyboard still has no trackpad and uses Apple’s stiff butterfly keys; consider Logitech’s Combo Touch keyboard instead, which feels nicer to type on and adds a trackpad.

The front-mounted Home button and TouchID sensor are unchanged, as usual.

As a rule, Apple doesn’t focus on budget-friendly gadgets. And that strategy has worked well over the last two decades—the company’s predilection for premium products at premium prices (not always unreasonable or uncompetitive prices, but premium ones) has paid off in the form of consistently extraordinary revenue and profit margins.

(Ars Technica may earn compensation for sales from links on this post through affiliate programs.)

But the handful of explicitly price-conscious devices Apple does sell, including the $329 10.2-inch iPad and the $399 iPhone SE, are some of the most quietly excellent devices it makes. They use processors that were in Apple’s flagship phones just a couple of years ago, rather than mediocre cut-rate chips that were purpose-built for cheap devices. You get years and years of software and security updates, unlike the paltry two years that Google wrings out of phone makers who participate in the Android One program (to pick one example). And while Apple cuts costs by recycling years-old designs and parts, it usually doesn’t skimp on construction and materials, so your hardware still looks and feels nice despite being a bit dated.

That’s all you need to know about Apple’s 9th-generation iPad, which you can still pick up for $329 starting September 24. I am sure that more people are going to read our review of the 6th-generation iPad mini, because it has a brand-new design and a cutting-edge processor in it. There’s certainly more to say about that device. But a whole lot more people are actually going to buy and use this ho-hum, workaday, plain-old iPad.

The 9th-generation iPad’s biggest improvement bar none is the upgrade from 32GB of storage to 64GB, the first capacity bump ever for a $329 iPad. Whether you intend to use the iPad as a cheap laptop replacement, a large-screened extension of your iPhone, a portable smart TV, or a tablet for your kid, 64GB of storage is livable in a way 32GB just isn’t in 2021. That’s 32GB of additional storage for apps, photos, games, and locally downloaded TV shows and movies to get you through long plane or car trips.

I would almost always tell anyone considering the 8th-generation iPad to spring for the $429 version with 128GB storage instead (and a new $479 256GB model also improves on that, if you know you need more space). But for the more casual users that the cheapest iPad appeals to, 64GB should be enough that you’re not constantly needing to clear out space or juggle large apps.

Apple is using its A13 Bionic processor in the 9th-generation iPad, a chip that was first included in the iPhone 11 and 11 Pro series back in 2019. Like the A12 it replaces, the A13 includes a pair of high-performance CPU cores and four low-power “efficiency” CPU cores, plus a four-core GPU.

The 8th-gen iPad’s jump from the Apple A10 to the A12 was a major improvement that made a meaningful difference in day-to-day use. The jump from A12 to A13 isn’t as big. You’re looking at a 20 or 30 percent improvement in processor speed and between 25 and 40 percent faster performance in games and other 3D-heavy apps. That’s a nice generational bump, but it’s not transformative—the A12 and A13 both feel like a big jump if you’re upgrading from an older iPad with an A9 or A10 in it, though.

We’ll add the other results for the iPad Pro when we’re able to run the benchmarks.

The 9th-gen iPad has the same 3GB of RAM as the 8th-gen version, which is the minimum amount required to support the full range of iPadOS multitasking features (3GB iPads will let you use two apps in Split View mode and a third app in Slide Over mode at the same time; on a 2GB iPad, using Slide Over with Split View freezes the apps underneath until you dismiss the Slide Over window again). Compared to a more expensive iPad with more memory, you may find that the 9th-gen iPad has to pause to reload apps or Safari tabs more frequently when multitasking, but that will depend a lot on what apps you’re running and how you’re using them.

The resolution, size, refresh rate, and quality of the new iPad’s screen hasn’t changed, but it does pick up support for True Tone, which subtly shifts the color temperature of the display to match the temperature of the ambient lighting. If you don’t like this feature, you can still turn it off in the display settings.

Apple lists “sRGB” color gamut coverage as a feature of the 9th-gen iPad on its spec sheet, where the gamut field on the 8th-gen iPad’s spec sheet is blank. The screen hasn’t improved—previous iPads already covered the full sRGB color gamut. Apple has just added the gamut listing to help distinguish the entry-level iPad from the more expensive models that support the wider DCI-P3 gamut.

The 1.2MP front camera on older iPads is now a 12MP wide-angle camera. This doesn’t really improve image quality—this is still a camera meant for FaceTime and Zoom calls, not for flawless selfies. But the wide-angle camera mode can capture a much larger field of view than the old camera could as long as you don’t mind the noticeable distortion around the edges.

The wide-angle camera also adds support for Apple’s “Center Stage” feature, first seen in the 2021 iPad Pros. When you’re using FaceTime or another video app that supports it, Center Stage enables a pseudo-panning effect that can track you as you move around, keeping you in the center of the frame as you do so. It’s not an essential feature, but it’s kind of neat, and it works as well here as it does in the iPad Pros.