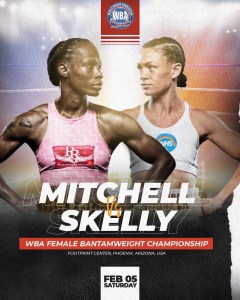 Jamie Mitchell is ready for her return to the United States. Her first appearance as World Boxing Association (WBA) bantamweight champion will be at the Footprint Center in Phoenix, Arizona, where she will defend her title against Carly Skelly from England.

Mitchell achieved a complicated goal, which was to travel to Liverpool to take the championship from Shannon Courtenay on October 9, 2021. The Los Angeles native shocked the world with a majority decision and will now return home to defend her belt.

Her opponent is Skelly, a British fighter who has proven to be tough despite the few professional fights she has made. She was born in Liverpool, is 35 years old and has been a regional champion in the past. It will be her first time out of her country, so the challenge becomes more complicated, but she has the motivation and the tools to surprise.