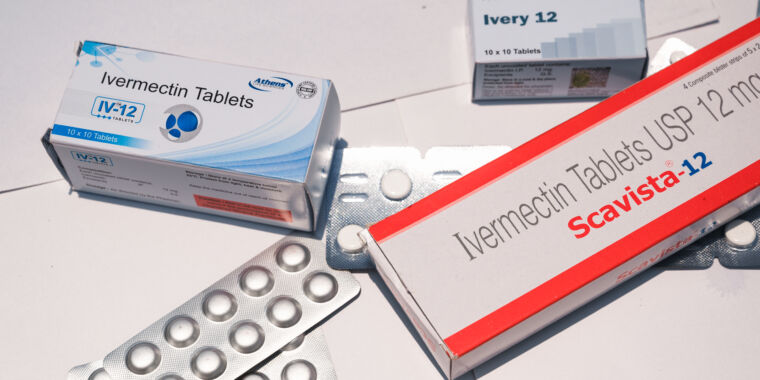 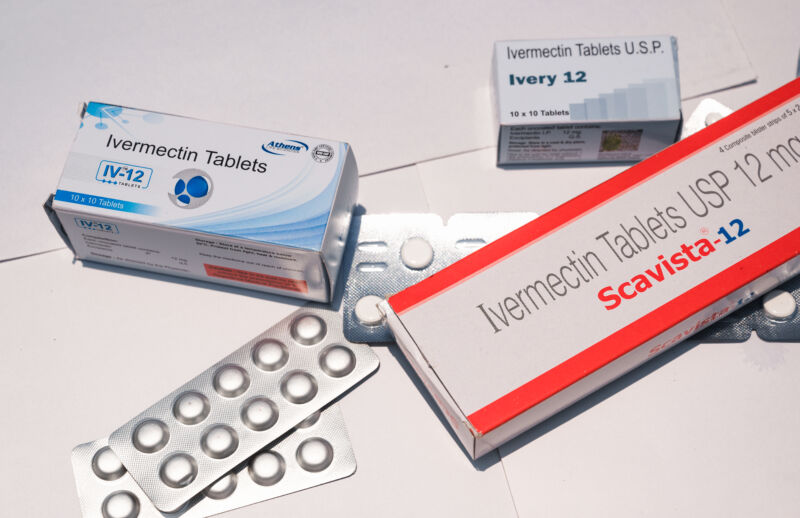 Enlarge / tablets of Ivermectin drugs in Tehatta, West Benga, India on 19 May on 2021.

Amid the current delta-fueled wave of COVID-19, officials have noted a dangerous surge in the misuse of a deworming drug routinely used in livestock. The result is an uptick in calls to poison control centers, empty shelves in farming supply stores, and pleas from regulators.

In an attention-grabbing tweet over the weekend, the Food and Drug Administration wrote bluntly: “You are not a horse. You are not a cow. Seriously, y’all. Stop it.”

The agency stressed that the drug, ivermectin, is not FDA-approved to treat or prevent COVID-19 and, so far, there is no evidence that it does either of those things. However, it can cause serious side effects and overdoses, which can be life-threatening, the agency warned. Overdoses can result in nausea, vomiting, diarrhea, hypotension (low blood pressure), allergic reactions (itching and hives), dizziness, ataxia (problems with balance), seizures, coma, and even death.

Prior to the pandemic, ivermectin had been used for decades to prevent and treat parasitic infections in people and animals. At low concentrations, the drug interferes with specific ion channels that are found in parasitic nematode worms, but not in people or animals. The ion channel disruption in nematodes results in paralysis and keeps the worms from feeding and reproducing. As such, ivermectin is routinely used in small animals, such as dogs and cats, to prevent heartworm infections. In large livestock animals—including cattle, horses, pigs, and sheep—it’s used as a deworming drug.

In humans, the FDA has approved ivermectin tablets to treat conditions caused by parasitic intestinal worms as well as topical formulations for some external parasites, like head lice. But it’s critical to note that the ivermectin drugs available to people involve relatively small doses and are in formulations known to be safe for human use. The over-the-counter livestock drugs, on the other hand, are not formulated for human use and have much larger doses for the animals’ much larger bodies. At higher concentrations, ivermectin begins to interfere with not just nematode ion channels, but other types of critical channels in humans and animals, like neurotransmitter channels. This can be extremely dangerous.

Amid the pandemic, researchers highlighted data suggesting that ivermectin might also have antiviral activity. And preliminary data suggested that the drug could thwart the pandemic coronavirus, SARS-CoV-2—at least in petri dishes. Specifically, ivermectin appeared to block critical intracellular transport proteins that SARS-CoV-2 uses to invade human cells. The drug may also interfere with the virus’ ability to latch onto human cells with its spike protein.

But the petri dish data has yet to translate into any convincing clinical data that the drug is actually useful against COVID-19 in whole people. Clinical trials have been small and produced inconsistent results. Meta-analyses aimed at weeding out potential clinical benefits have struggled with faulty data, and some have been retracted.

Additionally, researchers have reason to doubt that further research will prove ivermectin is effective against COVID-19. As the National Institutes of Health notes in its clinical guidance, drug studies suggest that getting blood concentrations of ivermectin high enough to replicate the SARS-CoV-2-thwarting effects seen in petri dishes would “require administration of doses up to 100-fold higher than those approved for use in humans.”

All of this hasn’t stopped COVID misinformation mills on the Internet from promoting the drug—and people from buying into it. The FDA has been warning of misuse for months. But amid the surge in the delta coronavirus variant, ivermectin misuse has escalated to alarming levels.

In a health alert Thursday, the Centers for Disease Control and Prevention warned that prescriptions for ivermectin have skyrocketed this month. And people unable to get a prescription for the drug have resorted to buying the over-the-counter livestock drugs, clearing out supplies in farming stores. In turn, poison control centers have seen a spike in ivermectin-related calls in recent weeks, and reports of serious illnesses from overdoses have also increased.

With the drug booms came booms in poisonings. In January, poison control centers across the US received three times the number of ivermectin-related calls compared with the prepandemic baseline, the CDC reported. In July, ivermectin calls have continued to increase sharply, reaching a fivefold increase from baseline. The calls have also been linked to a rise in ivermectin-related emergency department and hospital visits.

The CDC alert highlighted two cases, one in which an adult drank an injectable ivermectin formulation intended for use in cattle in an attempt to prevent COVID-19 infection. The person experienced confusion, drowsiness, visual hallucinations, and tremors and spent nine days in the hospital. Another adult was hospitalized after taking ivermectin tablets of unknown strength that were bought off the Internet. The person took five pills a day for five days and developed an “altered mental status,” in which they were disoriented and unable to answer questions or follow commands.

In Arkansas, officials also noted an increase in ivermectin-related calls to the state’s poison control center. One official in Arkansas’ Washington County was particularly alarmed to learn that the medical provider for a county detention center has been prescribing ivermectin to inmates and county employees. Since the start of the pandemic, over 500 inmates at the center have tested positive for COVID and an unknown number of them received the drug.

Dr. Rob Karas, the medical provider for the center, told a local CBS affiliate that he had taken ivermectin himself and given it to many of his family members. The Arkansas Medical Board has since opened an investigation into the case.

Likewise in Alaska, Kenai Peninsula Borough Mayor Charlie Pierce continued to promote and defend ivermectin use, saying in a radio interview: “Let the doctors experiment with perhaps some things that haven’t been signed off by the Food and Drug Administration.”