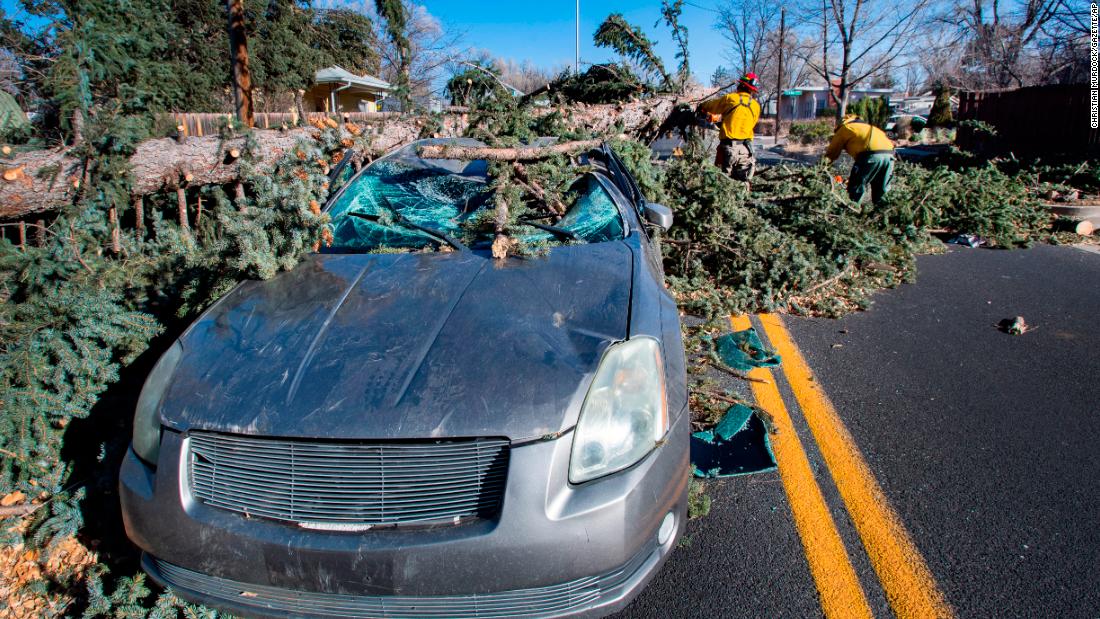 Nearly 20 tornado reports were documented Wednesday across Minnesota, Iowa and Nebraska. A tornado in southeastern Minnesota was the first ever reported in the state in the month of December, according to National Oceanic and Atmospheric Administration data.

Severe thunderstorm watches and warnings expired overnight, though strong winds — with gusts up to 70 mph — remain Thursday for parts of the Great Lakes area.

Wednesday’s storm outbreak comes days after an eight-state tornado outbreak that included the deadliest December tornado ever recorded in the United States.

Damage reported from Colorado to Michigan

In the west-central Wisconsin city of Stanley, a storm that hit Wednesday evening severely damaged several homes and other buildings, pictures posted by city police Thursday morning showed. Streets and yards were littered with debris in the city of about 3,500 people. One building’s brick wall was obliterated, falling onto a street. “We are relieved to report that the storm that swiftly swept through” the city “only resulted in property damage,” Stanley police said in a Facebook post. No injuries were reported. In northern Michigan, where most of the state’s power outages were reported, concerns about strong winds prompted officials Thursday to temporarily ban high-profile vehicles like tractor-trailers from traversing the Mackinac Bridge connecting the Upper and Lower peninsulas, the state transportation department said.

Several places in Colorado, including the US Air Force Academy in Colorado Springs, reported wind gusts of 100 mph or greater Wednesday, according to the weather service. Winds gusting up to 107 mph in Lamar toppled tractor-trailers, ripped off roofs and downed trees, Mayor Kirk Crespin said.

Air traffic controllers briefly evacuated their workspace at Kansas City International Airport on Wednesday due “to wind and the fact that it is a glass box 256 feet up in the air,” spokesperson Joe McBride said. Planes resumed departures about one hour after controllers were forced to head to safety, the airport announced. Parts of Interstate 70 in western Kansas were shut down Wednesday afternoon due to blowing dust, reduced visibility, and crashes, according to the Kansas Department of Transportation.

Strong winds also exacerbated concerns about wildfires in parts of the southern Plains and Southwest. The combination of 35- to 55-mph winds, with gusts of 75 mph, as well as low relative humidity and temperatures in the 70s and 80s, led the Storm Prediction Center — for the first time in its history — to warn of an “extremely critical” fire threat in December in the southern and central Plains. Certain areas are also facing an ongoing drought.

An evacuation order was in effect Wednesday for the town of Guymon, Oklahoma, due to one of nine wildfires in western and northwestern Oklahoma, according to the Oklahoma Department of Emergency Management.

In northern Texas, several hundred people were told “to evacuate or be prepared to evacuate” in the city of Iowa Park in Wichita County, where two fires are ongoing.

“The fire has changed direction a couple of times,” Wichita County Sheriff’s Deputy Melvin Joyner said, adding, “We’re working as hard as we can to keep residents safe.”

A 2,500-acre blaze is burning west of Amarillo, the Texas A&M Forest Service reported, and the agency is responding to the fires in Texas’ Wichita County.

A wildfire damaged six homes and two other structures in the Texas Panhandle city of Pampa, city officials said Wednesday. No injuries were reported.

As the storms swept across the central US, Kentucky and other states are still picking up the pieces from last week’s tornado outbreak. The damage rating for Friday night’s deadly tornado that tore through Mayfield and Dawson Springs in Kentucky has been upgraded to an EF-4 in intensity, with estimated peak winds of 190 mph, based on continuing damage surveys from the National Weather Service.

The tornado had a maximum path width of a mile or more and was on the ground for at least 128 miles, tracking across the entire area of responsibility for the weather service’s Paducah office. The tornado took more than two hours to move through western Kentucky.

The tornado length will likely increase as weather service offices near Paducah continue their surveys in the coming days, and the rating could be increased as well as more damage is surveyed.

President Joe Biden toured the areas hit on Wednesday and said he was shocked by the amount of damage wrought.

“The scope and scale of this destruction is almost beyond belief,” he said in Dawson Springs. “These tornadoes devoured everything in their path.”

Biden pledged federal funding for the recovery effort for the next 30 days, including “debris removal, cost of overtime and law enforcement, emergency service personnel and shelter, and that will get you through.”

Kentucky’s confirmed death toll from the tornadoes has been updated to 71 from 74 due to duplicate reporting, according to Kentucky Emergency Management. At least 14 others died in four other states.