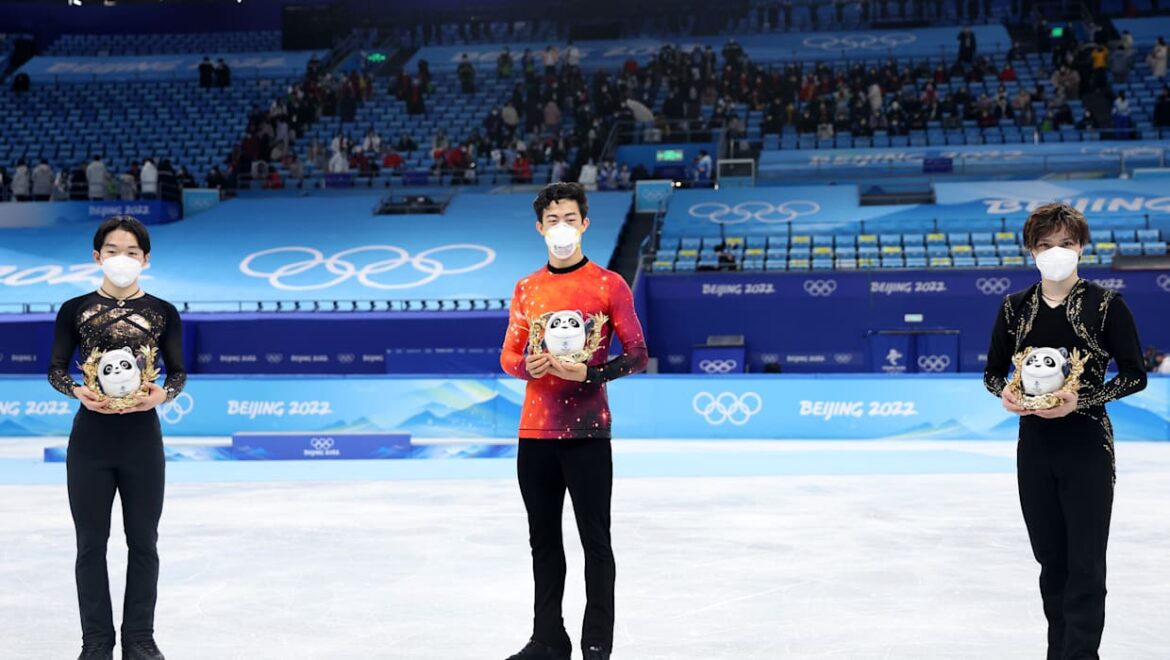 Nathan Chen has rocketed to the top of the figure skating world.

Out of this world, actually.

The three-time and reigning world champion was near his stirring best on Thursday (10 February) inside the Capital Indoor Stadium at the Olympic Winter Games Beijing 2022, skating to Elton John’s “Rocketman”for his free skate and blasting to a score of 218.63 for the program, which launched him to 332.60 points overall.

Japan’s Kagiyama Yuma (310.05) and Uno Shoma (293.00) rounded out the podium, going two-three to give their country two men’s singles medals at the Games for a second Olympics in a row.

Chen, 22, had set the world record in the short program, skating to a five-point lead over Kagiyama, the Youth Olympic Game Lausanne 2020 champion, who was skating in his first Games.

Chen becomes the seventh U.S. man to win an Olympic gold in figure skating, Evan Lysacek being the most recent at Vancouver 2010. It’s the eighth for Team USA in the discipline overall, with Richard Button have won two – in 1948 and 1952.

“I mean it’s a whirlwind right now – everything is happening so fast,” a breathless Chen told U.S. broadcaster NBC. “That program is really fun to skate. At the end, I really just had a blast out there. When I finished the last jump, I thought I was pretty close [to the win].”

“You can’t imagine how it feels,” he said of his Olympic-winning moment. “This means the world to me. I have the family connection [to Beijing, where his mother was born]. It’s amazing to have this opportunity to do it here.”

The American Chen had won three world titles leading up to Beijing, in 2018, 2019 and 2021, the world championships being cancelled in 2020 due to the global pandemic. His 10-event international win streak lasted from March 2018 through to October 2021, when he placed third at Skate America.

The blip played part in Chen moving back to his programs from the 2019-20 season, including “Rocketman” – as well as “La Boheme” in the short program.

His gold is a redemption of sorts: He finished 17th in the short program at PyeongChang 2018, rebounding to win the free skate and place fifth overall. Much of his Olympic quad leading up to Beijing he was surrounded by chatter of, “Can he win the Olympic gold?”

Meanwhile, It had been a disappointing short program here for Hanyu, where he finished eighth after popping his opening quadruple Salchow attempt. The Japanese superstar staged a comeback in the free, however, scoring a 188.06 and holding onto the lead into the final three skaters, but ending up fourth place, scoring a 283.21 total.

In the opening jump of his free, Hanyu, 27, fell on his historic quadruple Axel attempt, under-rotating the never-done-before element in his attempt to make more history.

“I honestly left everything out there,” Hanyu said in Japanese. “I have nothing left to give. I was at top gear right from the start and thought I rotated the Axel well. I went for it, and it’s something I’ll cherish forever.”

He added: “This Olympics was a challenge and I gave it everything I have. Sure the result is disappointing but I think I went all in.”

The top six was rounded out by Cha Junhwan (282.38) of South Korea and Chen’s American teammate, Jason Brown (281.24). It is a third Olympic medal for Uno, who was silver medallist behind Hanyu in 2018 and helped Japan to a team medal here. Kagiyama earned his second in just four days, having been on team Japan, too.

Kagiyama celebrated in the “Kiss and Cry” with his father and coach, Masakazu, who is a two-time Olympic figure skater himself (1992 and 1994). The two had beaming smiles under their masks as Kagiyama’s 201.93 came through – the only skater other than Chen to break the 200-point mark.

“This silver medal means something big for me and for my future,” the 18-year-old said. “I do not give up. I want to grow up more.”

While the men glistened in the short program, the skating was not as clean in the free skate, with none of the top skaters delivering perfectly clean performances.

But Hanyu, who skated in the penultimate group, put the pressure on the final group after his free skate, where he fell on his quad Axel attempt and then also on a quad Salchow attempt, but was clean from there on out, finding his feet with a triple Axel-double toe combination and then two quad toes in combination. He received Level 4 scores on his step sequence and spins, drawing the audience into his always-enchanting skating.

Uno skated fourth in the final group, but first among the top three. His “Bolero” free skate was choreographed by coach Stephane Lambiel, the Torino 2006 silver medallist. He made an early error on a quad Salchow – and then later would fight through a quad toe-double toe combo before singling a flip at the end of his final combination.

Uno nearly left the sport in late 2019 before joining forces with Lambiel, who he credited with his bounce back – and left the door open to continue skating.

“Many things happened to me over the last four years, he said. “I am proud to be back on the stage like this Olympics. But I believe that I can do better and I can be a better athlete. I don’t know by when I can continue, though, I want to grow up more and more.”

How it happened: Chen’s winning moment

But Uno’s aforementioned mistakes also left the door wide open for his teammate Kagiyama, who opened with three quads – a Salchow, loop (he was the first man to do the jump at the Olympics during the team event) and toe – putting a hand down to save the loop. But the performance flowed from there, his component scores only behind Chen and Brown, who is known for his artistry, on the day.

Fittingly the American Chen skated last, but he said hitches in his warm-up of the triple Salchow (to ready) for his quad had him worried: “I did a couple of triple Salchows in the warm-up and they felt off, so I was trying to figure out how to calibrate,” he told reporters. “Before every event I’m nervous. That was no different here. I had to make sure that all of the elements that I can do well, that I could do them as well as possible.”

He would attack out of the gates, hitting a quad flip-triple toe to start, then a solo quad flip and quad Salchow, the jump he had worried about. He would do five quads in total – the last in combination – and after he singled a flip attempt in that combo he let out a smile, later saying he knew he should have pushed harder.

But gold was in sight, and after a triple Axel and triple Lutz-triple toe combo, he let himself skate freely in through hip-hop inspired choreography and his step sequence, a remixed “Bennie and the Jets” blast from the loud speaker.

Chen doubled over upon finishing, clearly overjoyed by his triumph. He raised his arms overhead, then embraced coach Rafael Arutunian as he came off the ice. The group of Olympic competitors gathered just above the “Kiss and Cry” was giving him a standing ovation in an otherwise quiet arena due to Covid limitations.

“I never imagined that I would make it this far in my career,” Chen said later. “It’s still going to take a while to process this.”

Later asked if he would continue his career hereafter, he was unsure: “At this point I have no idea. I do know that I’m going to go back to school in August. As for skating, I’m going to take some time to think.”

For now he can think about his achievement, and add himself to the list of gold medal-winning men from his country, including Lysacek and Button, as well as Brian Boitano (1988), Scott Hamilton (1984), David Jenkins (1960) and Hayes Alan Jenkins (1956).