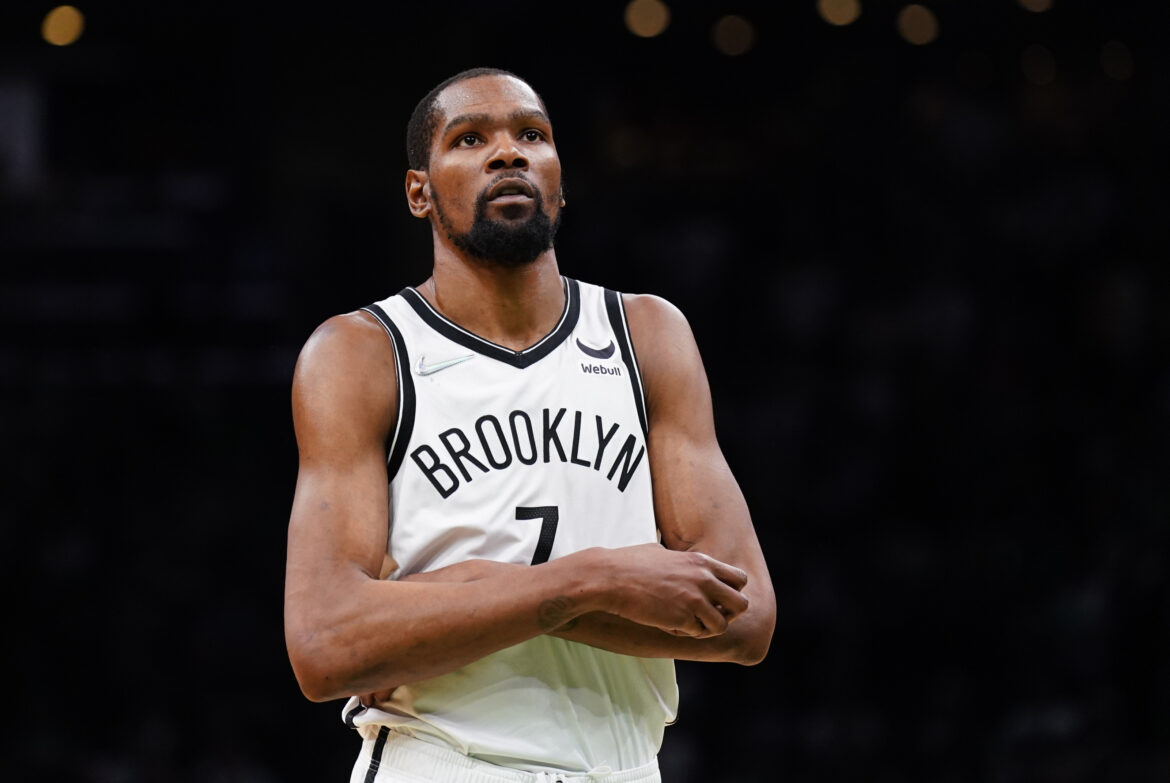 Two of the biggest offseason questions are still unresolved — where will Kevin Durant and Kyrie Irving play next season? Durant has been linked in trade rumors to the Raptors, Suns, Heat and plenty of others, and you can bet all 30 teams have at least inquired about the Nets’ asking price.

If the Nets do accommodate his trade request, they’ll almost certainly shop Irving (which they may do anyway) and that rumored deal to the Lakers might turn out to be the best of a bunch of bad options.

Deandre Ayton’s restricted free agency is still unresolved as well and the web of effects from him changing teams could ripple through the top of both conferences.

But even with these key issues lingering, most of the league’s power structure for the 2022-23 season has begun to take shape. Durant, Ayton and Irving moving could change these rankings a lot, but here’s how I see every NBA team right now.

Who lands in the top spots in our latest NBA Power Rankings?

30. San Antonio Spurs — The Spurs turned Dejounte Murray into future draft capital and let Lonnie Walker IV sign with the Lakers. They appear to be going all-in for the No. 1 pick in the 2023 NBA Draft.

29. Houston Rockets — The Rockets helped themselves in the draft and Jabari Smith should be a great long-term fit with their core of young creators. But this team is still on the ground floor of their rebuild.

28. Detroit Pistons — Detroit made moves around the draft, building their backcourt of the future with Jaden Ivey next to Cade Cunningham and landing a potential defensive anchor in Jalen Duren. But it’s going to take some seasoning to come together.

27. Brooklyn Nets — This is a big of an ambiguous hedge. If the Nets end up trading Kevin Durant and/or Kyrie Irving they’ll bottom out. But even if they keep both players, I’m betting on things getting a lot worse before they get better.

26. Washington Wizards — Re-signing Bradley Beal was a big move but that alone doesn’t really move Washington in the standings. They made some other nice offseason moves but the roster looks messy to me.

25. Orlando Magic — Paolo Banchero is going to score and if Jonathan Isaac is healthy and Markelle Fultz and Jalen Suggs keep improving, they could be frisky. They just have a more already in place than teams like the Pistons or Rockets.

24. New York Knicks — Way too many eggs in the Jalen Brunson basket for my liking.

23. Oklahoma City Thunder — Maybe I’m just caught up in the potential fun, but Shai Gilgeous-Alexander is an All-Star level player and their young core is deeper, more versatile and potentially more talented than any of the teams below them.

22. Indiana Pacers — Ben Mathurin was a nice pick-up but he’s a complementary piece and they’re still building the core he’ll eventually complement. Myles Turner and Tyrese Haliburton can only carry the Pacers so far right now.

21. Los Angeles Lakers — Anthony Davis and LeBron James are both a year older and potentially just as fragile. Russell Westbrook presents all the same problems he did last season. I just don’t think Thomas Bryant, Lonnie Walker and Darvin Ham are enough of a difference to change the fortunes of the Lakers.

20. Sacramento Kings — I think the Kings are better. Keegan Murray looks great and Kevin Huerter and Malik Monk were terrific additions. But there are a lot of talented, deeper teams between them and a playoff spot in the West.

19. Utah Jazz — The Jazz did great picking up all those picks for Rudy Gobert but they’re basically just subtracting him from last year’s roster, with no real replacement. I would expect them to take a big step back this season.

18. Portland Trail Blazers — Portland actually did a surprisingly impressive job with very little to work with, landing Jerami Grant, Gary Payton II and Shaedon Sharpe for the future. But they still look like a third-tier team in the West, battling for a spot in the play-in and one of the final playoff spots.

17. Charlotte Hornets — A promising offseason turned sour with Miles Bridges’ domestic assault arrest. He could (should) be facing jail time and will almost certainly deal with a suspension at some point. Mark Williams is nice but not an immediate contributor. Seems like it might be the year for a small step back.

16. Atlanta Hawks — Holding onto John Collins, drafting A.J. Griffin and turning Kevin Huerter into Dejounte Murray made for a nice offseason. But there are still some Eastern Conference teams I find more intriguing.1

15. Dallas Mavericks — This is not so much about me thinking Jalen Brunson is a huge loss, as much as me thinking the Mavericks’ playoff run last season was them performing way above their true talent level. They still have Doncic but they also have a big talent deficit at almost every other position.

14. New Orleans Pelicans — If Zion Williamson comes back anything like the level he was at during his brief healthy period, the Pelicans could climb much higher.

13. Chicago Bulls — They need Lonzo Ball to stay healthy and Patrick Williams to take a step forward. If not, teams like the Hornets or Hawks could leapfrog them in the standings.

12. Miami Heat — What’s the upside for the Miami Heat? The only way I see them improving on last season is if they’re remarkably healthy and that feels like a huge question mark given the age of most of their core pieces.

11. Cleveland Cavaliers — The Cavs faded down the last part of the regular season but they should be bringing back Collin Sexton and Ricky Rubio and I like the potential for another year of growth from Evan Mobley, Darius Garland and Jarrett Allen.

10. Philadelphia 76ers — De’Anthony Melton and P.J. Tucker were nice gets but I think James Harden’s best years are firmly behind him and they are a team who might feel comfortable taking their foot off the gas a bit during the regular season, knowing the playoffs are what really matters.

9. Toronto Raptors — Otto Porter Jr. should be a sneaky good signing, they brought back Thad Young and they’ll get Scottie Barnes with another year of experience under his belt. Even if they don’t trade for Kevin Durant, I think the Raptors could be hosting a playoff series.

8. Denver Nuggets — The Nuggets are returning Jamal Murray and, hopefully, Michael Porter Jr. which should make things much easier on offense. But don’t sleep on how much their perimeter defense has been upgraded with Bruce Brown and Kentavious Caldwell-Pope.

7. Los Angeles Clippers — I think John Wall is probably a non-factor but a healthy Paul George and Kawhi Leonard make this a top-10 team.

6. Phoenix Suns — If they trade for Kevin Durant, this could change. But otherwise, it seems like they’re likely to swap Deandre Ayton for a deal that won’t make them better in the short term. It’s just hard to see them repeating last year’s regular-season record.

5. Minnesota Timberwolves — Rudy Gobert is a top-8 defense basically on his own and this team has a ton of offensive firepower. The fit is odd and they’ll face the same playoff challenges the Jazz have the past few years but they could be a regular-season juggernaut.

4. Milwaukee Bucks — The Bucks might have been able to repeat as champions last season with a healthy Khris Middleton. But they also made some shrewd pick-ups with Jevon Carter and Joe Ingles who could give them even more depth this time around.

3. Memphis Grizzlies — I believe in the Grizzlies. Jaren Jackson Jr.’s injury is a big deal but they still have so much room for internal development from their young players and their rookies look like they might even play meaningful minutes.

2. Boston Celtics — I had no idea how the Boston Celtics could realistically improve last season’s roster. Somehow they conjured up a plus wing-defender who has a 50/40/90 season under his belt and can act as a primary creator. If Malcolm Brogdon is healthy he’s an offensive game-changer and this should be the team to beat in the East.

SUBSCRIBE: Get The Whiteboard delivered daily to your email inbox

This week on Above the Break, Justin Carter looking at what’s going on with the Las Vegas Aces, plus we’ll talk WNBA All-Star snubs and Tina Charles in Seattle.

The Bulls were able to retain Zach LaVine and Mat Issa explained why his offensive skills made him the crown jewel of this year’s free-agent class.

The 76ers and Nuggets have each shaken up their guard rotations on the trade market. Will De’Anthony Melton and Kentavious Caldwell-Pope unlock better versions of their new teams?

We wrapped up our NBA at 75 series, with two pieces from Micah Wimmer — on the unbelievable disaster that was Ted Stepien’s reign over the Cavs, and what could have been for the Buffalo Braves.