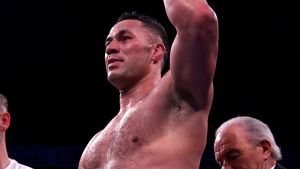 New Zealand is a country that in sports is known much more for rugby than for boxing. However, they have had great champions and boxers who have made a name for themselves on the international level.

This seems to have caught the attention of the website: British Boxing News that in a note published on February 3 gives a top ten of New Zealand fighters and that we bring them for your consideration.

Jimmy “Thunder” Peau (35-14, 28KO) is the owner of the seventh box, he was IBO champion and fought several fights in the United States. Sixth is David Tua (52-5-2, 43KO), a Samoan-born New Zealander who fought at heavyweight and won WBO, WBC and IBF continental titles. In fifth place is William Byrne, a man who fought at light heavyweight and heavyweight. Winner of silver medal of the Commonwealth Games in 74 and several times national champion.

Placed in the fourth position they name Davud Nyka (2-0, 2KO), a 26-year-old boxer just starting his professional career, but with a great track record in Olympic boxing where he has won two gold medals at the Commonwealth Games and a bronze medal at the Tokyo 2020 Olympic Games. As number 3,  is Ted Morgan (11-11-2, 5KOs), a British-born, naturalized New Zealander and 1927 Olympic gold medalist.

In second place is Tom Heeney (37-22-8, 15 KO), a blacksmith by trade, who fought Gene Tunney in 1928 at Yankee Stadium for the National Boxing Association (NBA) and current WBA world title. Undoubtedly, he had an important boxing career with a great presence in the United States.

The number one spot goes to Joseph Parker, a man who reigned at heavyweight in the WBO and who faced Anthony Joshua in 2018.

These are the top 10 New Zealand boxers published by the British Boxing news page.