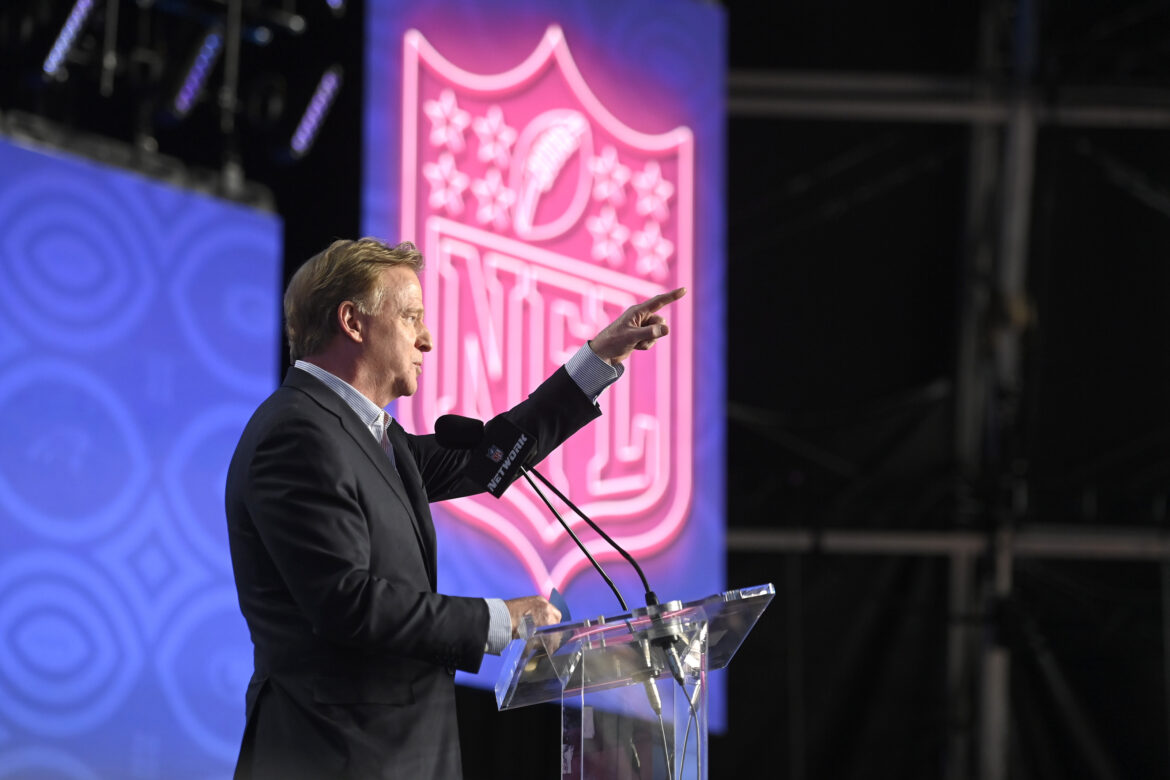 Call it the curtain dropping on before the NFL offseason slides into an intermission or deem it the true beginning of a new season; either way the draft is once again here to usher in a new class of potential superstar players.

This draft, unlike others in recent years, feels a little weird. There’s no clear-cut No.

Know who that was? It was Keyshawn Johnson.

It’s been eons since there’s been weird drama at the top of the draft, and it feels like we’re in for a truly chaotic night. Whether it’ll be trades, reaches, strange choices, or non-skill position players dominating, Thursday will surely be interesting.

We’ll be tracking and grading every first-round pick on Thursday night so that you can harness as much of the chaos as possible as we settle into a crazy NFL Draft weekend.

Let’s not worry about whether Walker will be better than Hutchinson or Thibodeaux, because the margin between the three is so slim.

The local kid stays close to home, and it’s a great pick for the Lions. Detroit hasn’t been seen as a defensive force in decades but Hutchinson’s arrival could change that. When you play in a division with Aaron Rodgers and Justin Fields, it’s a no-brainer to try and combat that with perhaps the best pass rusher in the draft. He feels like a Dan Campbell pick, which is also incredible for the culture reset happening in Motown right now.

In a league where offense is everything, it should come as no surprise that this year’s NFL Draft is a reaction and possible course correction to be the antidote. Stingley is an interesting choice, though. Sauce Gardner is believed to be the best cornerback in the draft class so skipping over him to take Stingley — who is still an absolute Dude — is going to be a narrative he needs to shake.

Robert Salah loves his defensive bruisers, and even though Keyvon Thibodeaux was still on the board the choice was Gardner. He’s fast, he’s devastating in coverage, and he’s the kind of guy the Jets are hoping can anchor their secondary in a division where Josh Allen is king and Mac Jones is battling a revamped Dolphins offense for supremacy in the AFC East.

The last time the Jets and Giants picked back-to-back it was a question of whether Sam Darnold would be better than Saquon Barkley. The Giants have a chance to go two-for-two, taking Thibodeaux to anchor their defensive line and potentially take the torch from Michael Strahan and Jason Pierre-Paul as the next best pass rusher for the G-Men. He didn’t have as many sacks as Aiden Hutchinson, but he had the highest pressure rate and he slid down draft boards for the dumbest reason (does he love football enough???). This is a steal for the Giants, and now have a guy to counter what the Commanders have in Chase Young and run down guys like Jalen Hurts and Dak Prescott.

Aiden Hutchinson stayed home and so does the draft’s best offensive lineman. The Panthers desperately need to revamp its offense, and more specifically Matt Rhule needs to figure things out this year or he could be out of a job.

The Giants were in a perfect position to double up with two of the best prospects in the draft and they did exactly that. New York essentially packaged their two picks, taking their top defensive target — and arguably the best of the three top defensive ends — and now snagged a top offensive lineman. It’s never sexy to draft a top lineman but games are won and lost, and quarterbacks are made and broken, by how good their pass protection is.

Atlanta is in full rebuild mode, and needed basically every position outside of tight end upgraded. Drafting Drake London does two things, it allows the Falcons to replace Calvin Ridley next season (and perhaps permanently) and adds a potentially devastating receiving combo with Kyle Pitts. Not since the days of Roddy White and Julio Jones have the Falcons seemingly had this exciting of a passing game, with Marcus Mariota able to sling it to them without any sort of pressure. The Falcons are going to be fun.

We knew there’d be a run on defensive talent atop the NFL Draft this year, but it was a similarly safe bet to assume that the top offensive lineman wouldn’t make it out of the Top 10 either. Charles Cross might be the third lineman selected but don’t assume that means he’s not as good as Neal or Ekwonu. In fact, PFF graded Cross higher than Evan Neal, so take that for what it’s worth.

The best possible thing the Jets could have done in the first round is split their picks and take the best defensive fit and then a wide receiver with their second pick. That’s exactly what it seems they did, as New York took Sauce Gardner to be the franchise lockdown corner and followed that by getting Zach Wilson some help. Wilson’s selection seemingly takes the Jets out of the Deebo Samuel running, as the No.

Our first trade of the night happened, but it didn’t end up the way everyone thought. When the New Orleans Saints went on the clock, the assumption was they moved up to draft a quarterback. They could still get one with the No. 19 pick, however, and pair him with one of the best receivers in the draft. Even if they don’t go with a QB, Olave is going to be an absolute weapon for Jameis Winston. Also, this marked back-to-back Ohio State wide receivers coming off the board.

Back-to-back trades? Now we’re cooking. The Saints moving up was surprising but the Lions trading all the way up from No. 32 was shocking. Williams joined Chris Olave and Garrett Wilson as the top receiver for Ohio State before transferring to Alabama, and the Lions are hoping he can take the immediate stride that fellow Bama receiver DeVonta Smith had for the Eagles.

There was a time not long ago that Hamilton was being talked about as the potential No. 1 overall pick. Baltimore has historically loved to draft absolute beasts on defense and Hamilton fits the bill. Put him in the secondary with Patrick Queen and the Ravens have a couple of studs anchoring their defense for years to come.