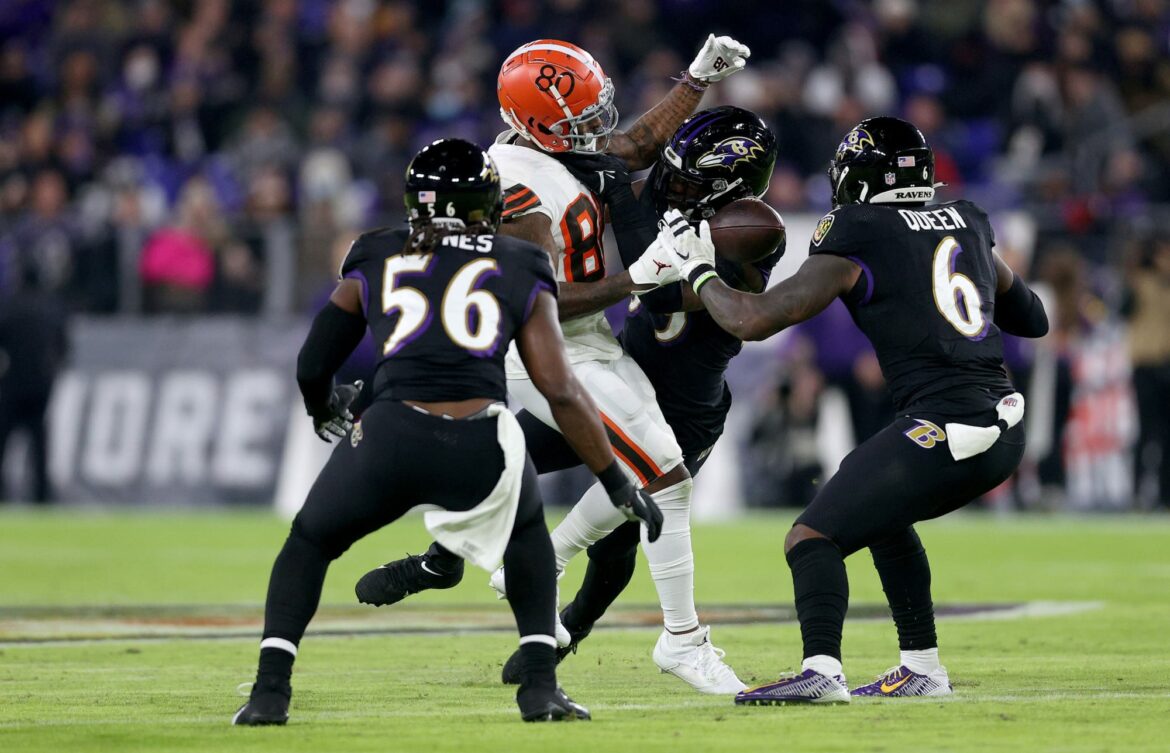 BALTIMORE, MARYLAND – NOVEMBER 28: Odafe Oweh #99 of the Baltimore Ravens forces a fumble on Jarvis Landry #80 of the Cleveland Browns in the second quarter during a game at M&T Bank Stadium on November 28, 2021 in Baltimore, Maryland. (Photo by Rob Carr/Getty Images)

The Week 12 slate of NFL games on Sunday concluded with the Baltimore Ravens hosting the Cleveland Browns. With the Cincinnati Bengals blowing out the Pittsburgh Steelers earlier in the day, both the Ravens and Browns were looking to pick up the pivotal victory.

But, the first half of the game featured some seriously sloppy football. Five drives towards the tail-end of the half all featured a turnover, including three interceptions by Ravens quarterback Lamar Jackson. It was certainly a sight to behold, which had many Twitter users processing what they were watching, as well as making some quality memes in the process.

Ravens and Browns are playing the game I expected the Jets and Texans to play today.

These 21 seconds left give the Browns a chance to hand the ball back to the Ravens.

To make the sequence of events even more bizarre, the Browns were the only team to capitalize with points on the scoreboard. After Jackson threw an interception to Browns cornerback Denzel Ward, Cleveland cut their deficit to 6-3 on a 46-yard field goal by Chase McLaughlin.

Despite the ugliness of the first half, the Ravens were able to put that behind them with their opening drive of the second half. Jackson was able to hit tight end Mark Andrews on a 39-yard pass, which was hauled in with one hand and with safety Ronnie Harrison interfering on the play. Three plays later, Jackson connected with Andrews once again on a 13-yard touchdown, giving Baltimore a 13-3 lead.

Let’s just say that both teams will be burning the first half tape of this Sunday night contest.